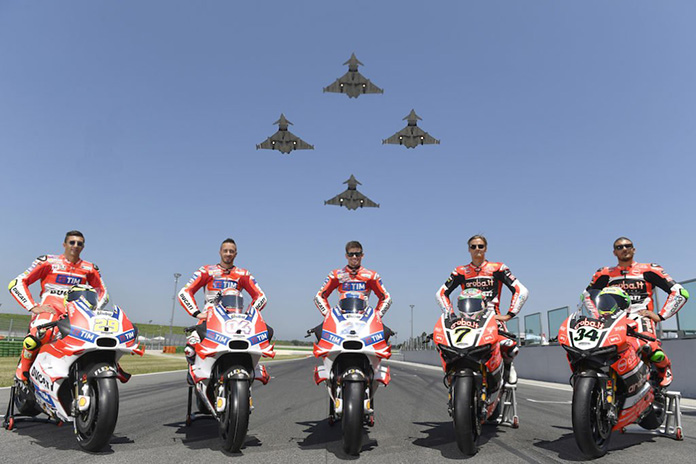 The ninth edition of World Ducati Week, the international get-together of Ducati fans and enthusiasts from all over the world, held every two years, has come to a close with a record-breaking attendance. WDW2016 both involved and excited the tens of thousands of motorcyclists who gathered together at the Misano World Circuit ”Marco Simoncelli” from Friday 1 to Sunday 3 July to celebrate and share their passion and enthusiasm for Ducati.

The bikes and the fans were the true stars of this incredible event. In three days the crowd attendance for this ninth edition is estimated to be over 81,000, a figure that is 25% up on the 2014 record, when around 65,000 people came to Misano. Ducati fans came to Italy’s Adriatic Riviera from all five continents, representing 66 countries throughout the world. 60% of the motorcyclists at WDW2016 came from Italy, with the remaining 40% confirming the strength and appeal of the Ducati brand all over the world: Europe, USA, Canada, Brazil, UAE, South Africa, India, Indonesia, Malaysia, Vietnam, Japan and even Sri Lanka, Puerto Rico, Bahrein, Kazakhstan, Mongolia, Guatemala, Angola and China, from where four people came to Misano on board Ducati Multistrada 1200 bikes. All these enthusiasts were united by the colour ‘Red’, the common denominator of Ducati passion, which in an event like this finds its natural expression.

World Ducati Week 2016 confirmed the major evolution that Ducati has been going through over the last few years. The slogan for WDW2016 was “More than Red”, which means strong roots in the world of sportsbikes, but also new models for new segments. Like the XDiavel, the new Ducati cruiser; the Multistrada 1200 Enduro and the new Scrambler Sixty2 400 and the Scrambler Flat Track Pro. These three recent additions to the Ducati range allowed the participants in WDW2016 to live new and unique experiences.

The surface area figure in this record edition of WDW is also significant, with around 90,000 sqm of space occupied inside the Misano World Circuit, 80% up on the 2014 edition. This allowed more and more unique opportunities to be offered, such as the DRE Enduro, or the Scrambler Flat Track School, a course to learn how to slide safely on oval gravel tracks. There was also a massive presence of Scrambler bikes in the circuit and the first-ever Scrambler Reunion brought in more than 2000 ‘Scramblerists’ from all over the world. There was also more space for entertainment such as exhibitions, and the celebration of the 90th anniversary of Ducati.

Much attention was also paid to an eco-friendly management of the event. This is an important achievement for Ducati and the WDW, which received an ISO 20121 certificate, the first example of an event of its kind in the world of two wheels.

The high point of the three intense and exciting days of WDW2016 came on Saturday 2 July, the day of maximum attendance. As well as the numerous activities on the weekend schedule, there were also two entertaining and exciting races reserved for Ducati MotoGP and Superbike riders of today and yesterday: the “Scrambler Flat Track Race by TIM” (held on Friday and won by Andrea Dovizioso) and the “Diavel Drag Race by Shell Advance” (held on Saturday and won by Scott Redding). The two races saw head-to-head competition between riders of the calibre of Casey Stoner (two-time MotoGP World Champion, in 2007 with Ducati), Andrea Dovizioso and Andrea Iannone (Ducati Team), Loris Capirossi (ex-MotoGP rider for Ducati), Chaz Davies (Aruba.it Racing – Ducati Superbike), Troy Bayliss (three-time World Superbike champion with Ducati), Regis Laconi (ex-factory Ducati rider and winner of the Drag Race in 2014), Scott Redding (OCTO Pramac Yakhnich) and Hector Barbera (Avintia Racing).

On Saturday evening, CEO Claudio Domenicali and the Ducati riders greeted all the Ducatisti from the stage of the Santamonica stadium at Misano Adriatico, and then revealed the 1299 Panigale S Anniversario, a special, limited-edition version of the Italian Superbike, created to mark the 90th anniversary of Ducati, which is on July 4. The stage then truly came to life with a spectacular rock concert by Italian legend Piero Pelù, who kept the crowd happy before making way for a live broadcast of the EURO2016 football match between Germany and Italy. At the same time there was also the traditional ‘Rustida’, the massive barbecue organized by the Adriatic Riviera lifeguards where all the Ducati management help to grill and serve the classic ‘piadina’ to everyone present.

As was to be expected the “Closed Room” with its sneak preview of the new 2017 Ducati SuperSport bike, was a great success. Ducati enthusiasts and fans were even prepared to wait hours under the sun to enjoy this special and exclusive preview.

The WDW is also a unique event from an organisational point of view meaning far-reaching company engagement. In fact all Ducati employees get involved in the months leading up to the event as well as during the weekend itself. This year more than 200 people working in the company (managers, employees and workforce) played an active part in organising WDW2016.

But the ninth edition of the World Ducati Week was essentially a peaceful and colourful invasion, both for the Misano World Circuit “Marco Simoncelli” and for the Adriatic Riviera, where the distinctive desmodromic sound of Ducati made up the soundtrack of this extraordinary weekend.

Here are some of the numbers that characterize this historic ninth edition of the WDW:

· 81,000 – the three-day circuit attendance
· 90,000 square metres of space occupied inside the Misano World Circuit by WDW2016 (+80% on 2014)
· 10,000 total number of laps on the track by cars and bikes during WDW2016
· 70,000 images shot by staff photographers
· 45 hours of video shooting by staff during the three days of the event
· Participants came from 66 nations
· 159 DOC (Desmo Owners Club) present from 38 countries
· 3 hours of Rustida at the Santamonica stadium, where 80 lifeguards and 33 Ducati managers cooked piadina and sausages for the public of WDW2016
· 121 different track activities over three days
· 22 minutes was the time taken by the ‘Big Red Snake’ of Ducati bikes to get out of Misano World Circuit for the bike parade to Riccione
· 1600 participants and more than 7200 Ducati-themed tests in the three days of WDW2016 Treasure Hunt
· 72 hours of riding school: DRE Safety (with Monster 821, Monster 1200, Monster R and Hypermotard), DRE Enduro (with Multistrada 1200 Enduro), Flat Track (with Scrambler Sixty2 400)
· More than 700 test-rides made during WDW2016 with the new XDiavel and Scrambler Sixty2 400
· 9 world titles at the start of the Flat Track by TIM and the Drag Race by Shell Advance (2 x MotoGP for Stoner, 3 x WSBK for Bayliss, 3 for Capirossi, 1 for Dovizioso)
· 8 Pirelli “Diablo Rosso II” tyres worn to shreds for the burn-out at the end of the “Diavel Drag Race by Shell Advance”
· 5000 people who visited the inside of the Closed Room to see the new 2017 Ducati bikes
· 310 journalists present (170 Italian and 140 international)

· Over 7,000 were involved in activities at the International Village
· 2,000 wheelies performed on a Hypermotard at the wheelie school in the German area
· 3,000 Kanji tattoos created in the Japanese area
· 60 kg fruit used to make Sangria in the Importers area for the Spanish aperitif
· 200 foosball matches played
· 2,500 darts thrown during the English Garden Games
· 3,000 joined the “Festa delle Nazioni” happy hour

For the very first Scrambler Reunion in the Land of Joy, in a total of 37 hours: