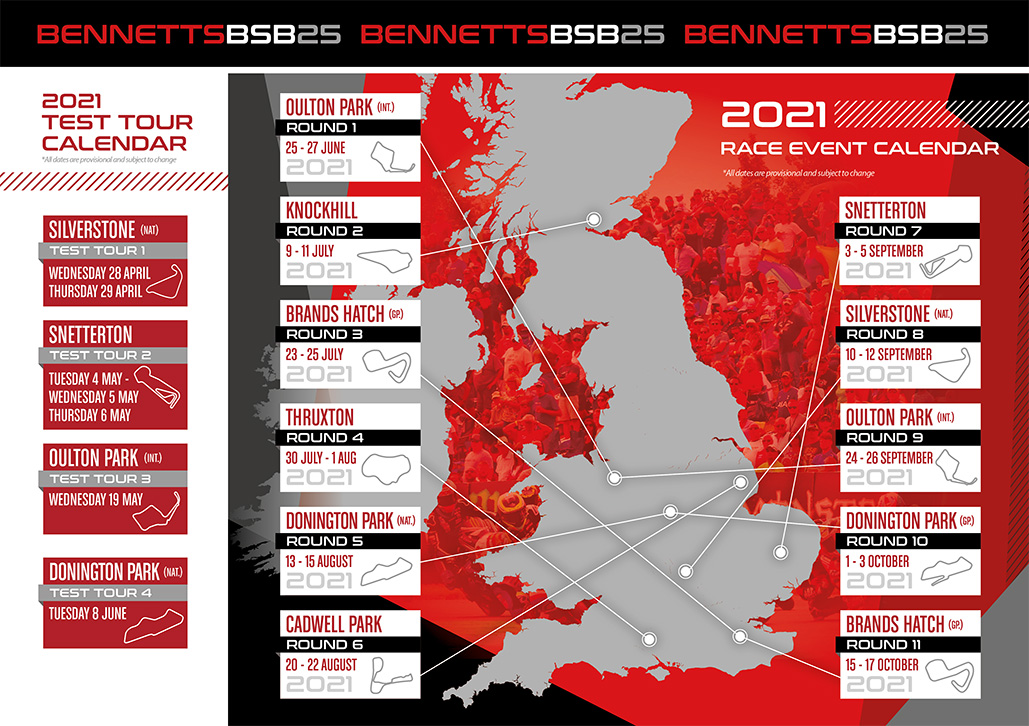 Series promoter and organiser MSVR has been in talks with the Department for Digital, Culture, Media & Sport (DCMS) over recent weeks to clarify aspects of the government’s roadmap plan – in particular the capacity limits that apply to non-seated venues during Step 3 (17 May to 20 June).

With no further information available, and the need to offer certainty to fans, series partners and stakeholders, the calendar has been updated and all events will now take place beyond 21 June – the date which provisionally marks the easing of spectator restrictions at large elite sporting events.

Consequently the opening round of the 2021 Bennetts British Superbike Championship will now take place on 25-27 June at Oulton Park, around a month later than previously planned.

The other events due to take place prior to 21 June, at Thruxton and Snetterton respectively, have also been rescheduled. The Hampshire circuit now hosts the fourth round on 30 July – 1 August and the Norfolk venue moves to 3-5 September. Meanwhile the first visit to Donington Park and the second visit to Oulton Park will both move back a week from the previous schedule, taking place on 13-15 August and 24-26 September respectively.

The official test programme will now begin at Silverstone (28/29 April), with the original opening test of the season at Donington Park switching to 8 June. Due to the opening two tests taking place under Step 2 of the Government roadmap, these will be held behind closed doors, with a limited number of fans expected to be welcomed back for the final two tests ahead of the 2021 season opener.

Bennetts British Superbike Championship Series Director Stuart Higgs commented: “Since the government’s roadmap was published in late February, we have been in constant contact with the Department for Digital, Culture, Media and Sport (DCMS) to understand its implications for spectator attendances. Unfortunately, the DCMS is still not in a position to confirm what capacities will apply prior to 21 June.

“With the start of the season rapidly approaching, and to offer the best possible chance of having all our fans back trackside, we have made decisive changes to the calendar to deliver the best opportunity for this to happen as we look ahead positively to our 25th Anniversary year.”

*All rounds are Bennetts BSB triple-headers

Webike SRC Kawasaki France Trickstar in the lead at Estoril

Silverstone Auctions Close Their Catalogue With A Number Of Exceptional Motorcycles

YART–Yamaha on pole position at Estoril