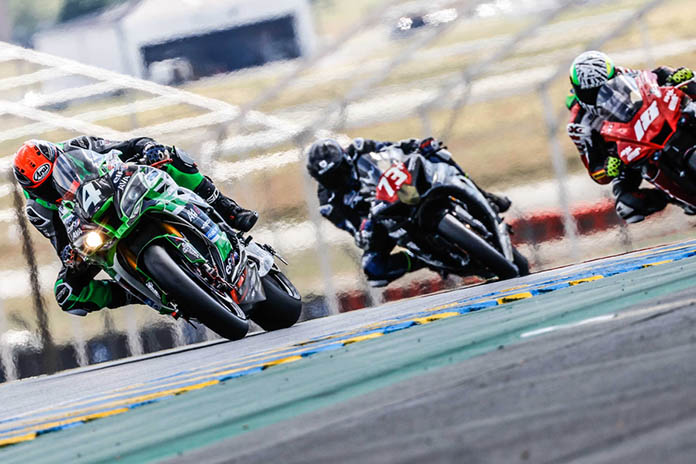 In the first face-off of the season at Le Mans, a day of private testing saw the 47 teams expected to be on the starting grid of the 24 Heures Motos out on the track. The favourites were out in force and a few new challengers unveiled their podium ambitions.

BMW Motorrad World Endurance Team were expected to be among the front runners and the Belgian factory team did not disappoint, clocking the fastest lap of the day, a 1:36.260, in the morning.  In the afternoon, armed with their new M 1000 RR, BMW Motorrad World Endurance Team, once again posted the fastest lap, a 1:36.449, ahead of YART Yamaha’s 1:36.466 lap. BMW kept the upper hand but the gap narrowed.

Tati Team Beringer Racing spring a surprise
A new independent team joined in the fray at the front end amid the factory teams. Tati Team Beringer Racing posted the 3rd-fastest time of the day with a 1:36.514 lap. The team are heading into their third season in the EWC with big ambitions, although team manager Patrick Enjolras is humble and discreet. “We’ve just worked on the new Kawasaki electronics with dedicated engineers. Now we know we have a very good machine.”

Among the privateer teams capable of giving the factory outfits a run for their money are VRD Igol Experiences, Moto Ain who are debuting in EWC after two back-to-back FIM Superstock World Cup wins, Maco Racing and 3ART Best of Bike, all four Yamaha-mounted.

47 teams are expected to be at the start of the 2021 24 Heures Motos at 12pm this coming Saturday. Three teams have had to withdraw because of stricter travel restrictions in the UK and France. Two British teams, British Endurance Racing Team and ADSS97, will not be able to travel to Le Mans. The French team R2CL have also withdrawn as all three riders – Danny Kent, Luke Mossey and Dan Linfoot – are British.