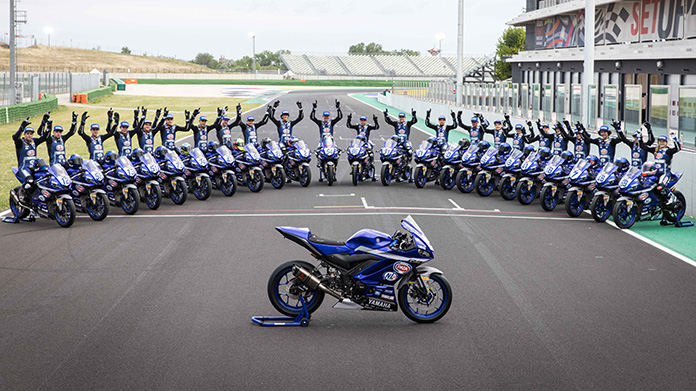 The 2021 Yamaha R3 bLU cRU European Cup officially got underway with pre-season testing at Misano World Circuit Marco Simoncelli, where the 25 promising young talents got a first taste of their Yamaha R3 bikes and received their race kits for the season.

Designed to provide a route from national to international racing, the Yamaha R3 bLU cRU European Cup is a new series open to riders aged between 12 and 20 years. The championship will be contested over six rounds, with two races per weekend, in support of the FIM Superbike World Championship.

On the first day in Misano, the riders were issued with their KYT helmets, Gaerne Boots and Gimoto leathers, and were given a Welcome Brief to introduce them to the series. The youngsters were also presented with their Yamaha R3 machinery, which they would be riding for the first time on the second day.

Before the riders got going, they took part in a technical workshop in the morning of day two, to gain a better understanding for how to set-up and work with their bikes, while they also attended a riders’ briefing.

On-track action was split into six 20-minute sessions, with the ever-changing conditions meaning the competitors got to experience riding with both the slick and rain compound Pirelli tyres. After a wet first session, the track continued to dry until the rain returned ahead of the fifth session, which was forced to be cancelled, before it dried up again for the final run ahead of the 2021 campaign.

The young riders will return to the Italian venue on 11 – 12 June for the opening round of the season, where they will go head-to-head to become the first winners of the Yamaha R3 bLU cRU European Cup. As well as the 25 permanent riders, there’s still an opportunity for youngsters to join the series at various rounds as wildcards after the Misano opener.

Alberto Barozzi: Yamaha Motor Europe bLU cRU Racing Manager
“Exciting! A simple word that perfectly describes the awesome atmosphere that was created during this first official test. We have already got to know all of the bLU cRU riders during the three Yamaha R3 bLU cRU European Cup digital Masterclass sessions, but to meet all of them live was great. During the two intensive days in Misano, the reaction was perfect, and immediately they have welcomed the bLU cRU spirt and its philosophy of respect. On the performance side, the level that all of them showed on track was very encouraging considering their young age and limited experience. Of course, they have room to continue to improve under our guidance. Thanks to all the parents that followed the riders during the two days, they all showed great attention and passion to support them in the right way. The staff had a really big task in getting everything prepared ahead of this first meeting, they did a great job and everything ran very smoothly. A personal thanks to the JIR Organisation, all the partners that were able to be there: Pirelli, Sutter, Ohlins, Gimoto, and to everyone else that has supported this new project, including Pata, NL and Dorna, who have all come together to support the new racing generation. We now look forward to the first round in Misano to see our bLU cRU riders in competition and around the WorldSBK paddock.”