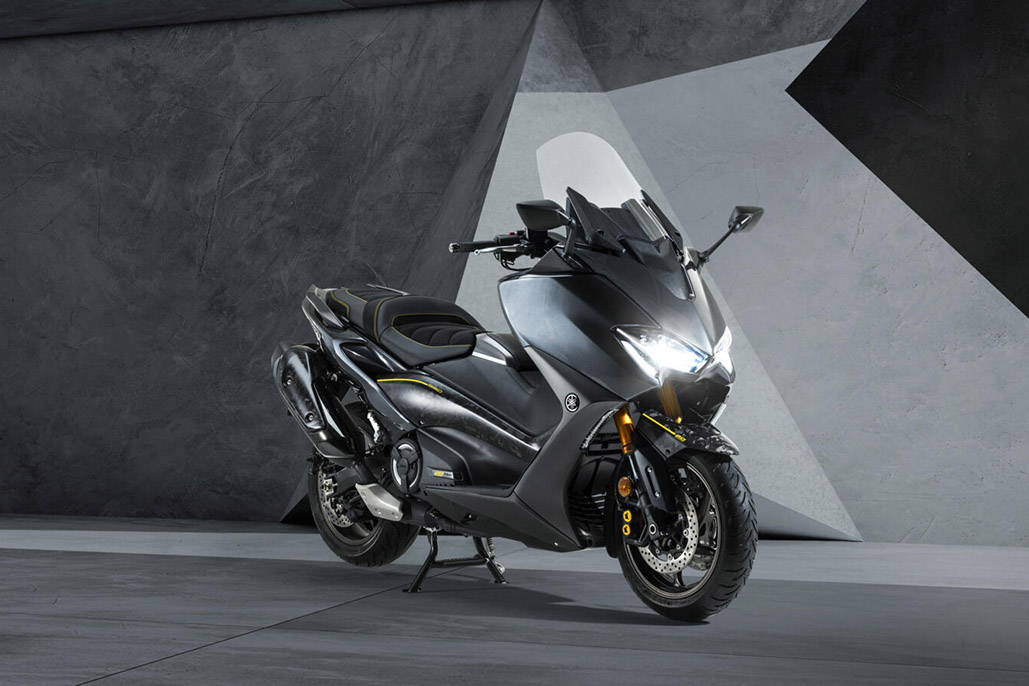 Celebration of an icon
The powered two-wheel world changed forever when Yamaha launched the original TMAX back in 2001. By being the very first machine to offer motorcycle performance with scooter comfort and convenience, this dynamic Sport Scooter has transformed the lives of hundreds of thousands of TMAXers all over Europe.

As the best-selling Sport Scooter in Europe every single year since its launch, the TMAX has been on an incredible journey, and along the way has established a truly iconic status among its legions of fans. Two decades after the introduction of the very first TMAX, Yamaha has created a special edition model that marks the outstanding achievements of one of the most loved and revered designs in the company’s history.

Featuring a range of exclusive equipment and offered in a unique new colour, the TMAX 20th Anniversary celebrates the continuing success of the world’s most successful Sport Scooter, and gives TMAX lovers the opportunity to own the ultimate edition of this truly remarkable Yamaha.

TMAX: Nothing but the MAX
Before TMAX, anyone looking for a fast, comfortable and enjoyable way to get to work had the choice of a smaller capacity scooter or a geared motorcycle. Both of these options were fine for many customers, but neither was the ideal solution for a discerning group of commuters and leisure riders who specifically wanted a machine that offered the simplicity of a “twist and go” automatic scooter together with the thrilling acceleration and high speed stability of a sports motorcycle.

Recognising the gap in the market, Yamaha’s designers embarked upon the project to build the world’s fastest scooter in the late 1990s. Nothing was ruled in or out, and in true Yamaha style the company ignored conventional thinking and created a totally new kind of hybrid two-wheeler that successfully combined the advanced engine and suspension technology from a motorcycle with user-friendly scooter features. Equipped with a step-through chassis and wind-beating bodywork – as well as automatic transmission, luxurious seating and a large underseat storage space – the radical TMAX was a huge gamble for Yamaha, but it was a gamble that was to forever change the face of long distance commuting.

The rest is history, and in 2001 this innovative and exciting high performance maxi scooter was launched into a vibrant European market that had never seen anything like it before. Its unique blend of motorcycle performance combined with scooter comfort and convenience made long and medium distance commuting quicker, easier and more fun than ever before.

Best-selling Sport Scooter for 20 consecutive years
In fact the original TMAX was so far ahead of its time that there wasn’t even a category for it, and so Yamaha created the Sport Scooter class which has since grown to become the most important segment in the scooter business.

TMAX has maintained its immense popularity and has been the best-selling Sport Scooter every year since its introduction 20 years ago. With almost 300,000 units sold to date in Europe, TMAX is by far and away the most successful Sport Scooter ever produced, and is one of the most important models in Yamaha’s line-up.

TMAX timeline: Evolution of an icon
Throughout its remarkable history the TMAX has constantly evolved to meet the needs and desires of each new generation of customers. Driven by a 500cc, twin-cylinder engine capable of achieving 160 km/h (100 mph), the 1st generation TMAX was the first true Sport Scooter. With its compact powerplant mounted rigidly in the tubular steel frame, it delivered a new level of high speed stability that made it the ideal vehicle for customers who needed a fast, comfortable and easy to use long distance commuter.

Between 2004 and 2007 the 2nd generation TMAX’s class-leading performance was taken to the next level with the introduction of a more powerful fuel injected engine, while handling quality was enhanced with new forks and dual front disc brakes with ABS as an option. A parking brake was fitted, and a larger 15-inch rear wheel was featured.

In 2008 the 3rd generation TMAX came with all-new bodywork, and handling performance was refined with the introduction of an all-new lightweight cast aluminium frame. Fork tube diameter was increased by 2 mm to 43 mm, and a new 15-inch front wheel was introduced.

2012 saw the introduction of the 4th generation TMAX that featured a new body design as well as a larger capacity 530 cc engine with belt transmission – and a new aluminium swingarm reduced the unsprung weight to give even smoother and more responsive rear suspension operation.

The 5th generation TMAX arrived in 2015, and its most notable new features were the motorcycle-type upside down front forks and radial-mounted brake calipers that underlined this iconic Sport Scooter’s position as the highest specification model in its class.

In 2017 the 6th generation TMAX came with a dynamic new look and featured a range of sophisticated electronic rider aids that offered even greater control in different riding conditions. Its class-leading specification included the Yamaha Chip Controlled Throttle (YCC-T) and Traction Control System (TCS) – and TMAX was also offered in a higher specification DX version which featured D-MODE switchable power modes, with cruise control, a heated seat and grips and an electrically adjustable windscreen as standard.

2020 saw the launch of the most dynamic and most powerful TMAX ever seen. Its new more aggressive bodywork combined with a larger capacity 560cc engine took the whole TMAX experience into new territory, and reinforced its status as the ultimate high performance scooter of all time.

TMAX 20th Anniversary: MAX evolution.
As a tribute to the outstanding success of the TMAX over the past two decades, Yamaha introduce the new TMAX 20th Anniversary. Only 560 individually-numbered units will be manufactured, making it one of Yamaha’s most exclusive special editions that is sure to be appreciated by TMAX customers all over Europe.

The distinctive boomerang body panels as well as the front fender and muffler heat shield are all manufactured from this strong and lightweight carbon material, giving the TMAX 20th Anniversary an even more dynamic look and premium feel – and yellow highlights on the boomerangs and fender are a reminder of the original model’s bright yellow colour scheme.

Numbered badge
Each TMAX 20th Anniversary will be fitted with a numbered badge that confirms its exclusivity as one of just 560 units that have been manufactured as a tribute to the industry’s most successful and iconic Sport Scooter. Together with the unique “fingerprint” of the forged carbon bodywork, the production number gives every individual model its own special identity.

Exclusive colour
The most unique and desirable TMAX ever made will be finished in a special Tech Graphite colour that underlines this very special scooter’s dynamic looks and perfectly complements the exclusive forged carbon bodywork. Contrasting bronze-coloured wheels reinforce the premium status.

Online Ordering System
The new Yamaha TMAX 20th Anniversary will be available exclusively via an Online Ordering System that is designed to be quick and easy to use. This system is due to go live on 31st March 2021 and details of the process will be announced soon. Please stay tuned for further information.

or head to the official Yamaha Motorcycles UK website yamaha-motor.eu/gb/en/