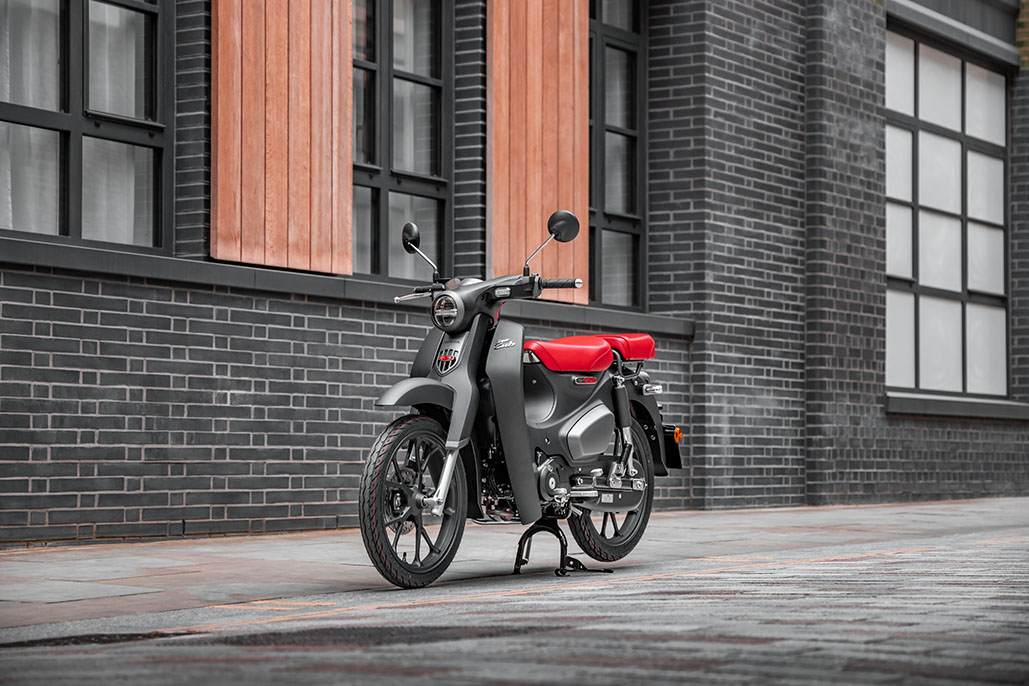 After its welcome return to European streets in 2018 as the Super Cub 125, the world’s best-selling motor vehicle gains EURO5 compliance for 2021 with a new, more powerful and efficient air-cooled engine. A pillion pad and footpegs are now standard-fit, while new suspension settings improve ride comfort.

The very first Super Cub C100 was introduced in 1958, Honda’s 10th year of existence. Created by Soichiro Honda and his long-time business partner Takeo Fujisawa, its stated aim was straightforward: ‘to provide the joy of playing a useful part in people’s lives’.

Nearly 60 years later, in 2017, the 100 millionth Super Cub was built, cementing its status as the most popular motor vehicle the world has ever seen. Along the way the Super Cub’s simple attributes of unique styling, reliability, frugality and sheer usability have never gone out of fashion. And it has quietly achieved exactly what Soichiro and Takeo wanted: to get people mobile and keep them mobile.

Up to late 2018 the Super Cub  series had only been available in Japan, where it has long been popular with business users including the Japanese Post Office, and in South East Asia, where it retains an important role in people’s lives as private transport. Well aware of the number of urban European riders – across a wide range of age demographics – who look for credible retro-inspired machinery and head-turning style, Honda unveiled the Super Cub 125 in 2018 as a modern evolution of the legendary name, marking a new chapter in its long history.

For the 2022 year model, the Super Cub 125 receives further advances for its European audience. The timeless look is unchanged, but a brand-new EURO5-compliant engine and host of improvements drive it on, just as Soichiro and Takeo would have wanted.

The classic styling is unchanged, and standard-fit pillion seat and footpegs are now added. Revised spring rates for front and rear suspension smooth the ride on rougher city streets.

Smoothing airflow on the clean side, the new airbox, designed to match the new engine, is smaller and combines with the new connecting tube and new injector position to improve driveability.

The outward appearance of the muffler – one of the many elements of the Super Cub’s ‘mythology’ – stays the same while the internals are re-worked; two catalysers were in place on the previous engine but, with the gain in combustion efficiency for EURO5 compliance, a single, more efficient catalyser is used. The ECU has new programming to maximise performance and efficiency and the Alternating Current Generator (ACG) output increased.

The gearbox remains a 4-speed unit (with neutral at the bottom) and ­­– in true Super Cub tradition – is operated via ‘automatic’ centrifugal clutch, without the need for a clutch lever. At standstill the rider simply selects the gear required with the left hand foot lever and, as the throttle is opened, the clutch operates automatically and does so through each ratio change, up or down. Final drive ratio is 2.50 with 14T drive and 35T driven sprockets. A helical primary gear reduces ‘mechanical’ noise.

The Super Cub 125’s time-tested, evocative styling – defined instantly by the leg-guards and fully enclosed mechanical parts – remains unchanged, and is a design with one word in mind: ‘universality’. In other words, it has to be easy for a wide range of people to use. A key part of this ethos is the laid-forward ‘S-shaped silhouette’ which runs from the step-through space to rear mudguard, making access on and off easy. New for the 2022 year model is the addition of a pillion seat and foot pegs as standard equipment.

Also instantly recognisable as Super Cub is the ‘unit’ steering, which unifies the separate elements – forks, handlebars and leg shields – into one cohesive whole. On the original machine the handlebars, shaped to be like the wings of a bird, were a tactile and welcoming sales point and the modern day Super Cub C125 with its forged, tapered handlebar wrapped in curvaceous moulded resin incorporating the switchgear and instruments, pays loyal homage to the original.

The grips are placed in a natural, easy-to-hold position and complement the straight-backed riding position, which gives excellent all-round visibility. Aiding comfort, the seat uses thick, high-density urethane foam. It is also cut back on both sides up front, helping ground reach.

All lighting is contemporary LED while the instruments highlight the depth of the overall design with two lenses separated by dual chrome rings. The outer ring houses the sweep of the analogue speedometer’s needle plus warning lights; the inner an understated digital display.

A modern finishing touch is the Honda Smart Key which also controls the immobiliser as an extra theft deterrent, and is equipped with an ‘answer back’ function whereby the indicators will ‘blink’ at the push of a button to make finding the vehicle easy in busy parking areas. And, with a nod to its forebears (and underlining its place in Honda’s history) a historical 3D ‘Classic Wing’ logo crowns the Smart Key fob.

Fun, easy handling has always been another Super Cub strength. To this end, the tubular steel ‘backbone’ frame has a rigidity balance carefully tuned around the headstock and between the engine mounting points, to optimise performance for the 124cc engine; the redesigned engine crankcases have new mounting hangers. Both handlebars and seat are rubber mounted and the footpegs also feature rubber inserts.

A 220mm front disc brake and single-piston caliper are matched by a 110mm rear drum.

Unsurprisingly, over six decades of production, the Super Cub has some remarkable stories and achievements behind it. Here are just fifteen: