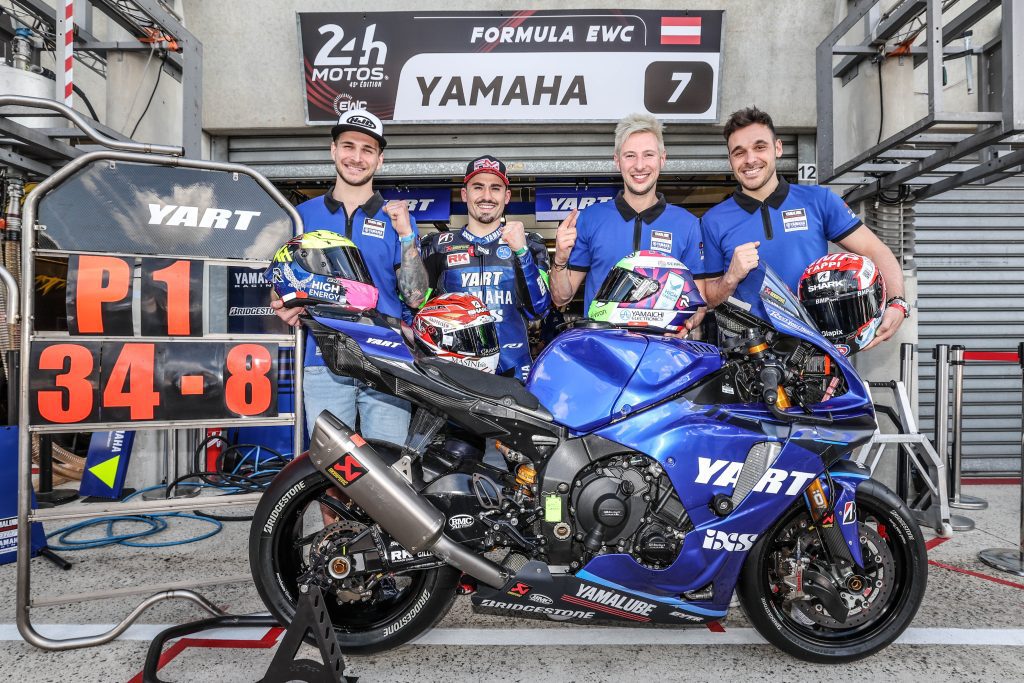 YART – Yamaha Official Team EWC has claimed a sensational provisional pole position – its third in succession – for the 24 Heures Motos, round one of the 2022 FIM Endurance World Championship.

With qualifying results this season based on the average time of the fastest two riders from each team, rather than three previously, the laps of Karel Hanika (Czech Republic) and Marvin Fritz (Germany) were used to determine which team lines up at the front for the start of the big race, which is scheduled to begin at 15h00 CET tomorrow (Saturday).

Hanika’s performance on the #7 Yamaha RZF-R1 stood out with the Czech the only rider to lap the 4.185-kilometre Circuit Bugatti in under 1m35s in a time of 1m34.878s. It also comfortably eclipsed Randy de Puniet’s previous Le Mans’ benchmark of 1m35.730s set on a Kawasaki in 2017. YART’s pole at an average of 1m35.080s came despite Niccolò Canepa (Italy) suffering a low-speed fall during his in-lap in the Red Rider session.

“I’m really proud of my team because they give me the perfect bike and I could really do the perfect lap so we happy to be on the pole again,” said the 26-year-old Hanika. “It’s the result of our hard work during the winter, we were practicing also very well here and our pace is really strong. For me it was a great lap, I had the perfect timing, the perfect bike, the perfect tyres and I’m really thankful to my team for that. We always say it’s possible to do better and I am sure one of us next year is going to prove this. But now I’m really happy because my team-mates are doing a great job and I’m learning every day with them. It’s amazing to be again on pole, we we are ready for tomorrow.”

How the chase for pole position unfolded
Following Thursday afternoon’s First Qualifying, which ended with session bests for Karel Hanika (Blue Rider), Gino Rea (Yellow), Niccolò Canepa (Red) and Kenny Foray (Green), Second Qualifying took place in similarly dry and sunny, albeit cooler conditions this morning.  Hanika took full advantage to once again top the Blue Rider session, this time with a stunning 1m34.878s effort after Josh Hook held top spot for a period. Hook ended up third behind Gregg Black but ahead of Markus Reiterberger and Claudio Corti. Italian Corti was one of a handful of riders to crash during the session, with Christian Gamarino and Marek Szkopek also falling.

Illya Mykhalchyk initially headed the Yellow Rider order before Marvin Fritz and then Gino Rea demoted him in quick session, with Rea completing the 20-minute session in first place on a 1m35.186s. Fritz took second followed by Mykhalchyk, Xavier Siméon and Xavi Fores who, along with Kevin Manfredi, was among the notable fallers.

Mike Di Meglio was the early pacesetter in the Red Rider session until Niccolò Canepa moved ahead only to fall at Turn 7. Di Meglio retook top spot and headed the order until the final five minutes when Sylvain Guintoli grabbed the initiative. The session ended with Guintoli, part of the EWC world title-winning Yoshimura SERT Motul team from 2021, fastest in 1m35.535s. Canepà returned to the action and ended up second quickest ahead of Di Meglio, Jérémy Guarnoni and David Checa.

The Green reserve riders were the last to take to the track although their lap times are not used to determine the final Qualifying order. Kenny Foray was fastest ahead of Kazuki Watanabe, James Westmoreland, Marc Moser and Bálint Kovács.

RIDER QUOTES
Formula EWC, Niccolò Canepa (YART – Yamaha Official Team EWC): “I’m really happy and I’m really proud of my team and my team-mates. Karel did an amazing lap time that was really impressive. We are in pole position, we are here and we have to be happy. We feel really good for the race. During the whole winter in the winter testing we did really well as a team and we feel good with the bike, we have a good pace and our target is to finish the race but I am confident we can fight for the victory. We believe we have the strongest machine to win the race. When I crashed, we checked the data and we saw there was a small problem on the brakes. I knew I was coming back to the pits so I was not pushing. I was really surprised to be on the floor but when I came back in we didn’t have any fresh tyres so I had to put on a rear tyre with more than 50 laps so it was impossible to improve my lap from yesterday and be in the 1m34s. But we are on pole, we are three riders and we did the pole and this is enough.”

Dunlop Superstock Trophy, Hugo Clere (Team 18 Sapeurs Pompiers CMS Motostore): “We are satisfied because it’s a pole position, we knew that we could do this performance this morning because of the cold temperatures, which was of course the best conditions for us. I am happy, we had some very good lap times, we did the job and myself too. The most important now is the race. We remember last year that the number 18 Yamaha had the pole position for the Superstock class but, unfortunately, we had a very unlucky beginning of the race and we stopped quite early in the race. We are back in pole position and we really hope we can finish the race and, of course, a podium is the target in the Superstock class.”