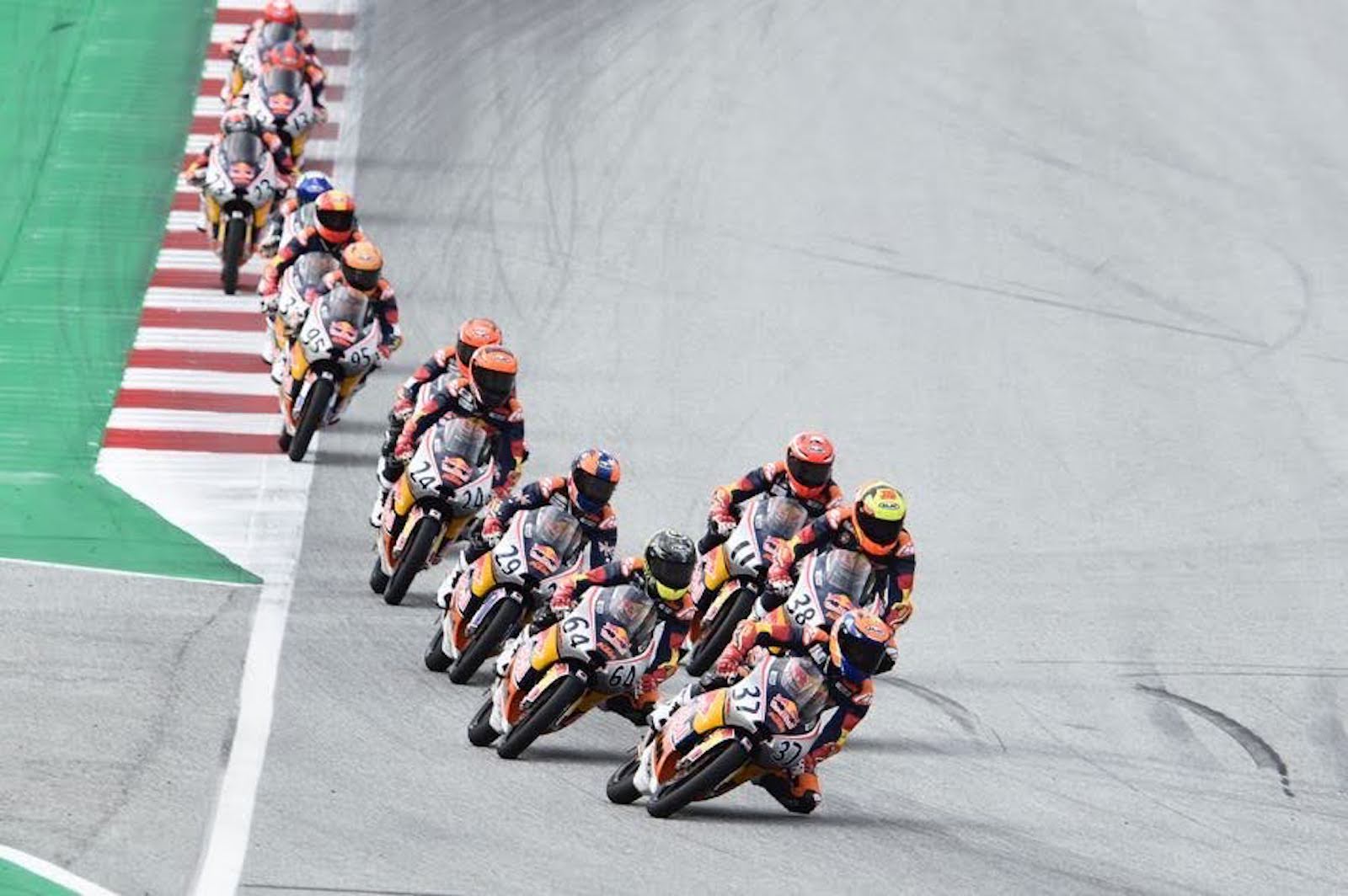 By the narrowest of margins Pedro Acosta completed his clean sweep of Red Bull MotoGP victories in Austria. The 16-year-old just scraped his final victory from the hands of Daniel Muñoz at the final turn when the 14-year-old ran wide and dropped to third behind Iván Ortolá for another all Spanish Podium.

As in all four races at the Red Bull Ring over these two weekends a hungry pack of KTM RC 250 Rs fought for the lead with the top 15 being covered by less than two seconds for much of the 17 laps.

Acosta with the edge

“I don’t have words to describe how I feel about this best ever start to a racing season for me,” exclaimed Acosta. “It was another very hard race, they have all been hard. With each race the guys seem to get more and more aggressive in the opening laps so I really had to keep out of trouble.”

“In the middle of the race as the rear tyre dropped off a bit I felt more and more comfortable though, I could slide the bike into the corner and hold the slide on acceleration so that felt good and gave me the confidence at the end. I tried to take the lead in the right place again but this time I had no advantage and had to do the right thing through the last corners.”

Ortolá from the TV

“I watched yesterday’s race on the TV yesterday evening,” explained 16-year-old Ortolá. “Yesterday I was also in the battle for the lead but I made mistakes. I worked out exactly what I did wrong watching on the TV and today I put it right. I enjoyed that so much.”

Daniel Muñoz from the front

After racing at the front for much of the four races Daniel Muñoz finally got to stand on the podium. “Yes, it’s great to be here after such a tough weekend. I was pushing so hard to try and stay in front but the harder I pushed the more the bike moved around and it was hard to keep it on the track. I am happy with the podium and look forward to the next races.” Indeed he initially had 3rd taken away from him by the stewards but it was then reinstated as he was deemed not to have gained an advantage with his last lap excursion.

David Alonso, the 14-year-old Colombian completed the Spanish speaking clean sweep and his own clean sweep of 4th places with another fine ride. “In a way I am disappointed not to make the podium but I was happy that I managed to turn up the aggression a bit in this race and battle harder. So when I had a big moment, almost highsided on the last lap and dropped back, I was able to fight back and take 4th again.”

“It’s been such a hard weekend,” explained 16-year-old Spaniard David Salvador after taking 5th. “It was another hard race but I finally felt good on the bike. I don’t know why it has taken so long for that. We have just had a lot of problems to work through these two weekends but finally I felt good and could run at the front and enjoy it. I hope we can take it from here for the rest of the Cup.”