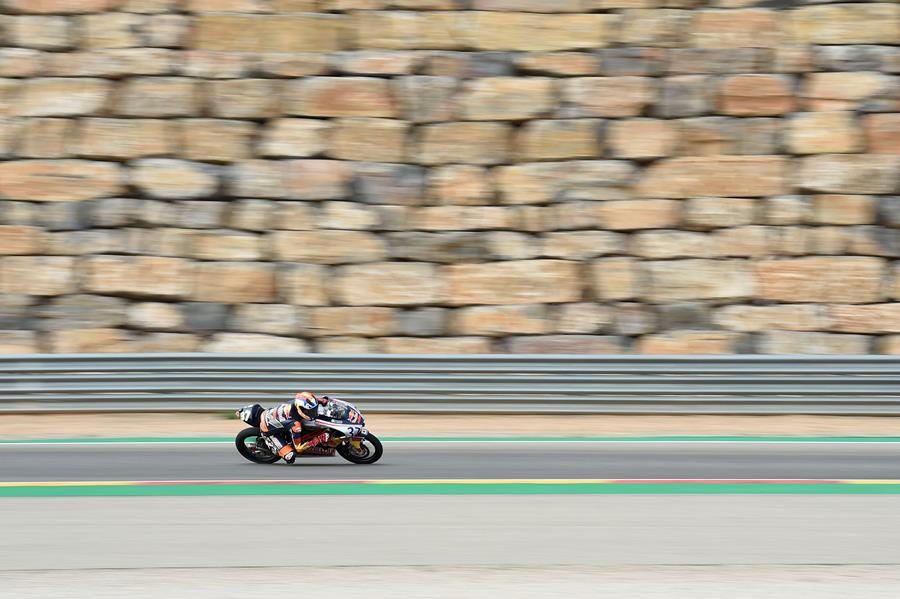 We have had a 7 week gap since our 4 races in Austria but now the Red Bull MotoGP Rookies Cup is very much back with unsurpassed on-the-edge-of-your-seat action. Starting with the Grand Prix of Aragón, we are racing on 4 of the next 5 weekends.

8 races for the KTM RC 250 Rs mean that there are 200 points on offer so clearly the championship is wide open even though Spanish 16-year-old Pedro Acosta dominated the opening 4 races. His sensational form at the Red Bull Ring netted him 100 points, he is 36 ahead of fellow countrymen, 14-year-old David Muñoz and 48 in front of 15-year-old Daniel Holgado. Colombian 14-year-old David Alonso is tied on points with Holgado.

We have seen such leads quickly evaporate many times before in Rookies Cup, a bad weekend is all it takes and the compressed calendar means that there is no slack for recovery of form or from injury.

The only certainty in Rookies Cup is that we will have 8 races full of staggering excitement from the world’s fastest teenagers.

While we have paused for some weeks, the GPs have raced on and we’ve been watching a string of ex Rookies succeed.

#RookiesRule
With Darryn’s win in Barcelona the Binders became only the fourth pair of brothers in history to win GPs, both ex Rookies of course. Brad’s Brno victory in MotoGP was a first for an ex Rookie, Miguel Oliveira matched that at the Red Bull Ring. Those, added to the victories of Jorge Martín and Enea Bastianini in Moto2, have made it a healthy haul for ex Rookies this season. The all time total now stands at 108 wins and 319 podiums.

Those who want to add to those amazing totals should take the Road to Rookies Cup as online applications are open for the 2021 season – https://rookiescup.redbull.com/join-us – put yourself on the Rookies Radar.