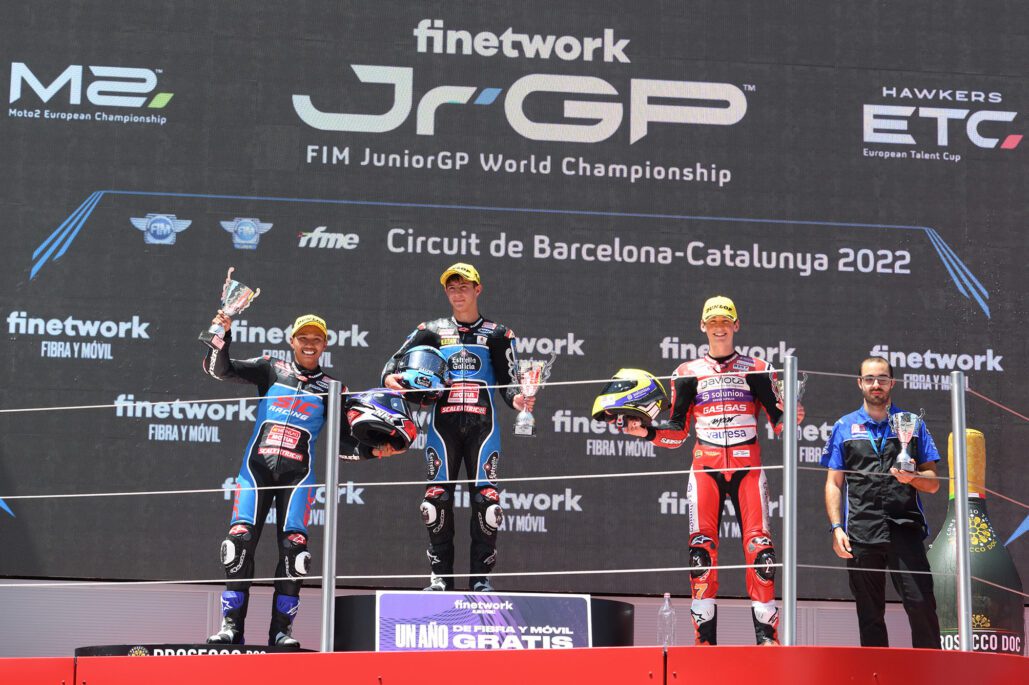 Rueda and Agius walk away with two wins from two as Uriarte pips Esteban to victory in the Hawkers ETC.

It was double delight for both Jose Rueda (Team Estrella Galicia 0,0) and Senna Agius (Promoracing) in the JuniorGP™ and Moto2™ European Championship classes respectively as the Spaniard and Australian strung perfect races together in Round 3 of the Finetwork FIM JuniorGP™ World Championship at the Circuit de Barcelona-Catalunya. Brian Uriarte (Team Estrella Galicia 0,0) emerged victorious in the only Hawkers European Talent Cup race of the day after a great battle with Joel Esteban (Aspar Junior Team).

JuniorGP™
In Race 1, Rueda took the lead at Turn 3 and never looked back in the opening race of the day. The Spaniard was untouchable and won by 11.3s as the battle for the podium raged behind. Second place eventually went the way of Syarifuddin Azman (SIC Racing) who claimed his first podium since his Barcelona win in 2021, as a late charge from Filippo Farioli (Aspar Junior Team) saw him beat Angel Piqueras (Team Estrella Galicia 0,0) and David Salvador (Laglisse Academy) to the final podium spot.

Race 2 followed the same sort of script. Rueda didn’t get the holeshot but by Turn 3 he was leading the race and again, the number 99 cruised to a third straight JuniorGP™ win. The fight for the podium went down the wire again with Azman taking P2 and Farioli snatching P3 from Piqueras on the run to the line to make it the same podium we saw in Race 1. Rueda’s double victory sees him take a 39-point lead over Salvador into Round 4.

Moto2™ ECh
The first Moto2™ ECh race treated us to an intriguing battle between Agius and polesitter Lukas Tulovic (Liqui Moly Intact JuniorGP Team). Tulovic led for the most part until a mistake at Turn 9 with two laps to go allowed Agius to swoop through – and the young Australian held on for his first Moto2™ victory. Alex Escrig (Yamaha Philippines Stylobike Team) completed the Race 1 podium, with Eric Fernandez (Team Speed Racing) taking the Stock win.

In the second race, Tulovic – like he did in the first – got a good start and took an early advantage. But once again, after making a small error at Turn 9, Agius pounced and this time, with plenty of laps left on the clock, the Aussie pulled clear and claimed a dominant victory. After a great battle with Escrig that went to the final corner, Alex Toledo (Pertamina Mandalika SAG Euvic) managed to pick up his maiden podium in third. Fernandez won the Stock race in the afternoon to make it two from two.

Hawkers ETC
In the Hawkers ETC, the race for victory came down to Uriarte vs Esteban. Esteban led into the final corner but Uriarte was able to get a superior run to the line to win for the first time this season, beating Esteban by just 0.014s. Reigning Champion Maximo Martinez (Team Honda Laglisse) claimed the final podium spot in third for his second rostrum on the spin.

That’s it from Barcelona! Round 4 takes us to the world famous Circuito de Jerez-Angel Nieto at the start of July.