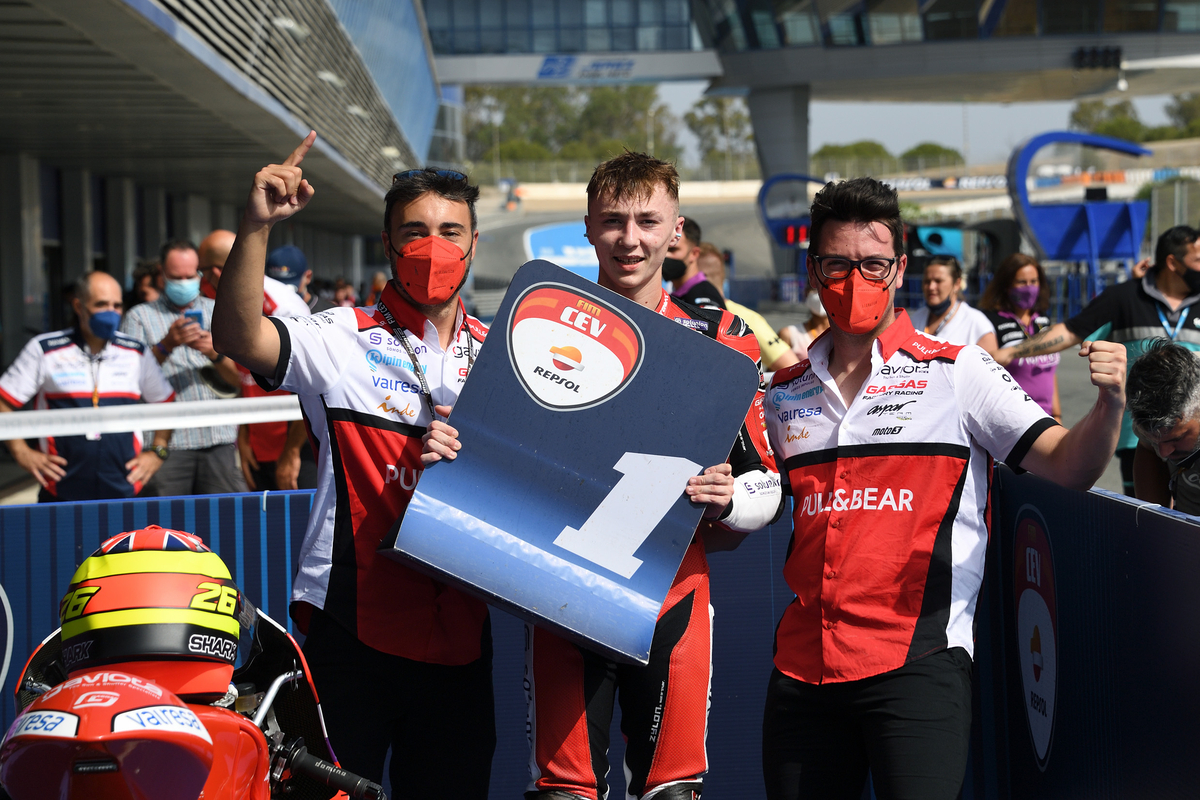 What a day we’ve had under the sun in South Spain! New winners, new championship leaders and a new champion, it was all action in Jerez.

The Circuito de Jerez – Angel Nieto played host to Round 6 of the FIM CEV Repsol series. The morning started in emotional circumstances as the whole paddock came together to observe a minute of silence in the memory of Hugo Millan. In his honour, racing got underway and in the FIM Moto3™ Junior World Championship it was brilliant start for Brit Scott Ogden (Aspar Junior Team) who picked up his first-ever Moto3™ JWCh victory. Race 2 went the way of Avatel – Cardoso Racing’s David Muñoz. In Moto2™ European Championship, Fermin Aldeguer (Boscoscuro Talent Team-Ciatti) grabbed another win, with team-mate Alonso Lopez finally grabbing his first win of the year in race 2. In Hawkers European Talent Cup it was the perfect day for Maximo Martinez (Team Honda Laglisse) who took both wins.

Race 2 didn’t go the same way for Ogden as he crashed out on lap 8. Instead, it was David Muñoz that would take victory, using his superior place to pull out a one second margin at the flag over second place Ivan Ortola. It marked off a great day for Muñoz and Ortola, with both of them going one better in race 2 than they did in race 1. Daniel Holgado picked up third in race 2, meaning that he held his championship lead to 42 points over race-winner Muñoz. But with just 75 points left to play for, the championship is still firmly in the grip of Holgado.

Fermin Aldeguer came into race 1 of the Moto2™ ECh with a 44 point advantage. To win the championship he needed a 50 or more point advantage at the end of the race, but with Aldeguer taking another win and Alonso Lopez taking another second, it left the 16-year-old with just a 49 point advantage, meaning the title would roll on to race 2. Taking third place was ‘best of the rest’ Lukas Tulovic (Liqui Moly SIC Intact Racing Team) once again. After a brief battle with Xavier Cardelus (Promoracing), Tulovic dug deep and pulled out a great performance to beat him to the flag.

Onto race 2 and all Aldeguer needed was a 25 point advantage at the end of the race. Lopez grabbed the lead and, after a brief wave to each other on the straight down towards turn 6, the team-mates battled all the way to the final corner. At last Lopez picked up his first-ever win in the class, but it would be Aldeguer who was the real winner, clinching the 2021 Moto2™ ECh title and becoming Champion! In a repeat performance of race 1, Tulovic would take third place, but this time far more comfortably than before in what was a very strong race for the German.

In the HETC there was plenty of action at the front. After a red flag due to an incident at Turn 8, the race was restarted for a 7 lap dash. A big group eventually stretched itself out into just three. Maximo Martinez, Brian Uriarte (Team Estrella Galicia 0,0) and team-mate Angel Piqueras were the benchmark, pushing the pace to seriously fast lap times. As they came across the line it was Uriarte who crossed it first but, after exceeding track limits at Turn 1 on the final lap, the win was gifted to Martinez! His first win in the class! Piqueras watched on behind, taking 3rd only 0.104s behind at the flag.

Race 2 was more of the same close action in HETC. All the championship hopefuls were in the mix, all until none of than then championship leader Xabi Zurutuza (Cuna de Campeones) crashed out at Turn 11 on lap 10. His crash blew the title hunt wide open and with Martinez eventually streaking away and picking up his second race win of the day, this time actually crossing the line first, it put the Team Honda Laglisse rider into the lead of the points. Completing the podium was once again Uriarte and Piqueras.