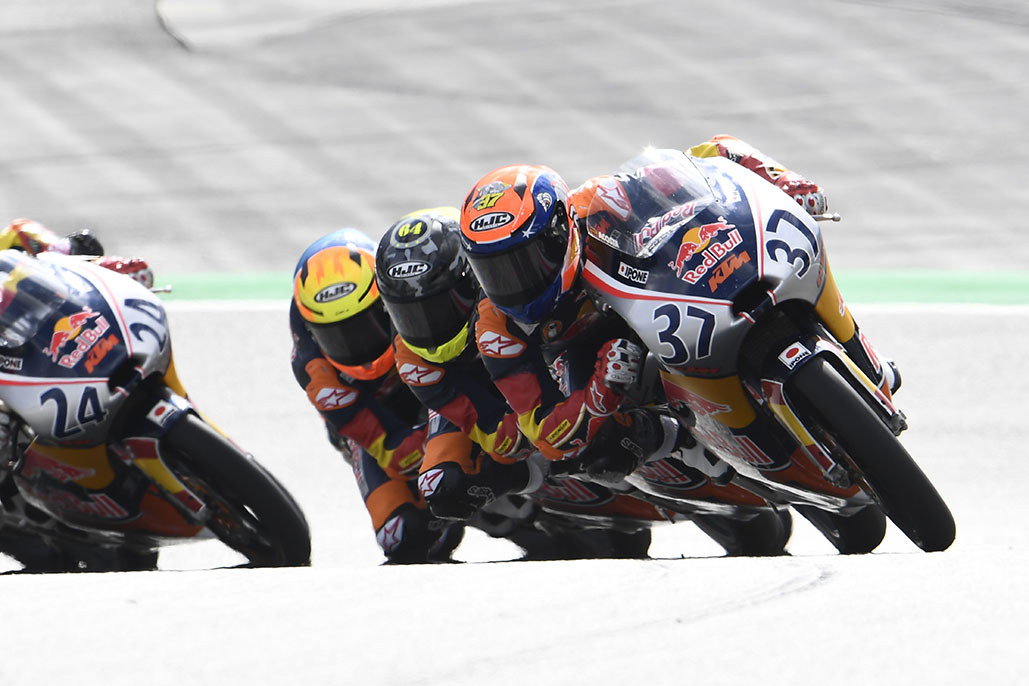 Last weekend we had two fantastic Rookies Cup races to start the 2020 Season. We stay at the Red Bull Ring for Races 3 and 4 this week with the expectation of another two intense demonstrations of KTM RC 250 R action.

It was a weekend that again saw ex Rookies on the podium in all three Grand Prix classes including Jorge Martín’s superb maiden Moto2 win on the Red Bull KTM. From our races we had ample evidence that the Rookie future is just as bright.

Rookie most likely to

An obvious candidate for the mantle of ‘Rookie most likely to’ is Pedro Acosta. The 16-year-old Spaniard started his second season in the Cup as a favourite having finished second in last year’s standings. He also won Race 1 in Spielberg last year but it was no easy matter to take his Austrian win total to 3!

Surprisingly it was Rookies newcomers that gave him the hardest time though both races featured a huge lead pack that might have seen any one of 15 cross the line first.

The newbies that did chase Acosta past the flag were fellow Spaniards, 14-year-old David Muñoz and 15-year-old Daniel Holgado, identical podiums in both races.

So what of this coming weekend, can anyone get the better of this Iberian trio? Prime candidate is another Spanish speaker, David Alonso, the 14-year-old Colombian also a first year Rookie who finished 4th in both races.

Oldies to crank it up

Those with more Rookies experience, like Àlex Escrig, the 16-year-old Spaniard who qualified 2nd, had a troubled weekend. Escrig slid off in Race 1, crossed the line 6th in Race 2 but was demoted to 15th due to a post race 3 second penalty for exceeding track limits.

Highest finishing non newbies (apart from Acosta) in Race 2 were 18-year-old Australian 3rd year Rookie Billy van Eerde in 7th and Dutch 14-year-old Zonta van den Goorbergh 8th. The old guard have got to get their act together this weekend.