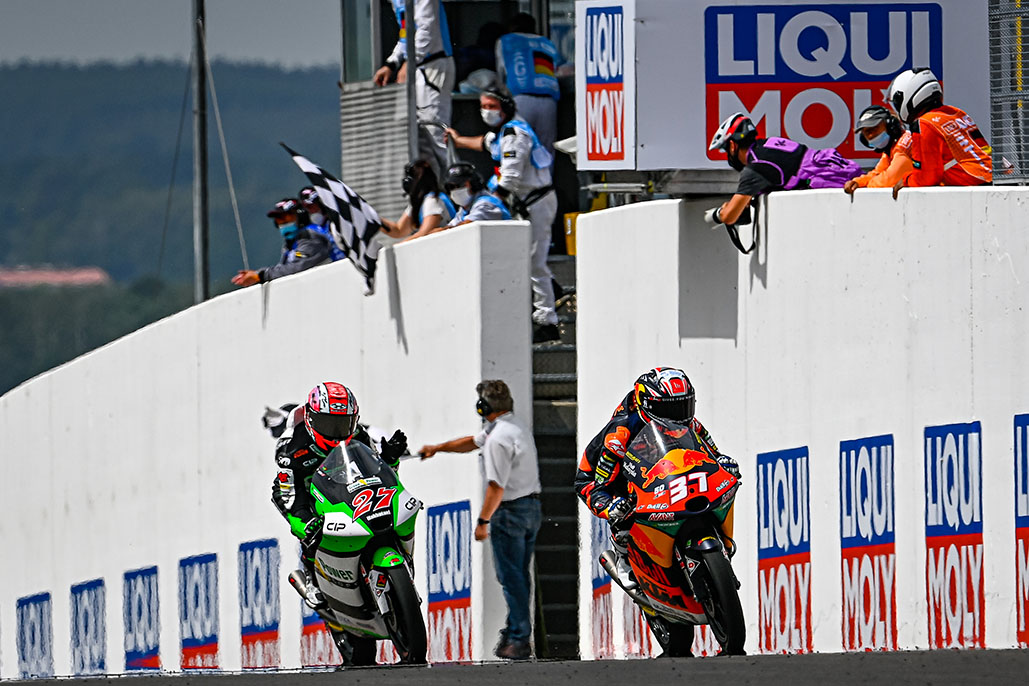 The Championship-leading rookie gets back to his old winning tricks, with Toba and Foggia completing the podium

Pedro Acosta (Red Bull KTM Ajo) took back the Moto3™ momentum at the Liqui Moly Motorrad Grand Prix Deutschland, the rookie sensation slicing through to fight at the front and then holding off Kaito Toba (CIP Green Power) on the final lap. Toba took his first podium since his 2019 win in Qatar after an impressive Sunday’s work, with Dennis Foggia (Leopard Racing) completing the podium after leading much of the race and then seeing Jeremy Alcoba (Indonesian Racing Gresini Moto3) get a one position penalty for exceeding track limits and then failing to give the place back.

By the exit of Turn 2 it was Tatsuki Suzuki (SIC58 Squadra Corse) into the lead, the number 24 fighting off Toba through Turn 1 as the two made an initial break, but soon the number 27 fought back and headed through to lead the train at the front. Darryn Binder (Petronas Sprinta Racing) soon bolted into pitlane for his ride through as Foggia hit the front, before Yuki Kunii (Honda Team Asia) crashed from the lead group after he found himself on the outside of Jaume Masia (Red Bull KTM Ajo). Masia got a Long Lap penalty for the incident not long after.

Meanwhile at the front, it was Foggia vs Acosta but the Italian held strong, leading a few laps with no one able to get past. When they did though, it was once again Toba and Acosta on the attack, the two making their presence felt in the early stages.

With 15 to go, a multi-rider shuffle at Turn 1 saw Romano Fenati (Sterilgarda Max Racing Team) make contact with Deniz Öncü (Red Bull KTM Tech 3) and the Turk crash, as well as Lorenzo Fellon (SIC58 Squadra Corse) as he got caught up in it. Öncü was able to rejoin down the order, before even more drama hit not long after. Masia overcooked it at Turn 1 and slid out, and Yamanaka crashed tagging Stefano Nepa (BOE Owlride). That also caused Fenati to run off in avoiding action. The Italian got back on track in P13 but ten seconds off 12th, and then received a Long Lap penalty for his earlier contact with Öncü.

After the carnage and run offs, there were 10 riders in the front group, followed by the duo of John McPhee (Petronas Sprinta Racing) and Elia Bartolini (Avintia Esponsorama) a few seconds. The Scot had earlier been shuffled down the order avoiding the Öncü incident. Fenati was another eight seconds behind them, with Andi Izdihar (Honda Team Asia) in P14 and then Binder, with the South African on for a point after a drama-free ride past the crashes and run offs that had been ahead of him.

Back at the front, Foggia raced on. And by six to go the Italian was creating a little daylight behind him, with Acosta the man on the chase – directly followed by his closest challenger in the points, Sergio Garcia (Gaviota GASGAS Aspar Team). It didn’t last long though, with the gap chopped down and Acosta back at the head of the train. Alcoba was on a charge through the order, but the Spaniard exceeded track limits on the way and was told to drop a position…

Onto the final lap, it remained the Championship leader in the race lead and the number 37 kept the hammer down. He held his nerve against Foggia, who tried a move for the lead at Turn 7 but ran wide. Alcoba also then pushed his way through before Toba followed suit, the Japanese rider then challenging Alcoba for second. He got him at Turn 12, before setting his sights on Acosta going into the final corner for the final time…

Acosta, however, couldn’t be stopped and increases his advantage to 55 points, as well as giving KTM their first Moto3™ win at the Sachsenring since 2014. Second went to Toba, his first podium since the Teruel Grand Prix in 2020, and Alcoba crossed the line in third – but hadn’t complied with the penalty. He was therefore demoted, with Foggia onto the podium.

McPhee was next up, just getting the better of an impressive ride from rookie and injury replacement Elia Bartolini (Avintia Esponsorama), with Fenati, Binder and Izdihar the final scorers.

Moto3™ will be back on track at the classic TT Circuit Assen next weekend – make sure to tune in!

Pedro Acosta: “It was a hard race, so long. it was difficult to manage the tyres, but I think the team gave me the best bike they could give me. I think I can only say thanks to the team, the guys that help me everyday to improve, and I can’t say more.”