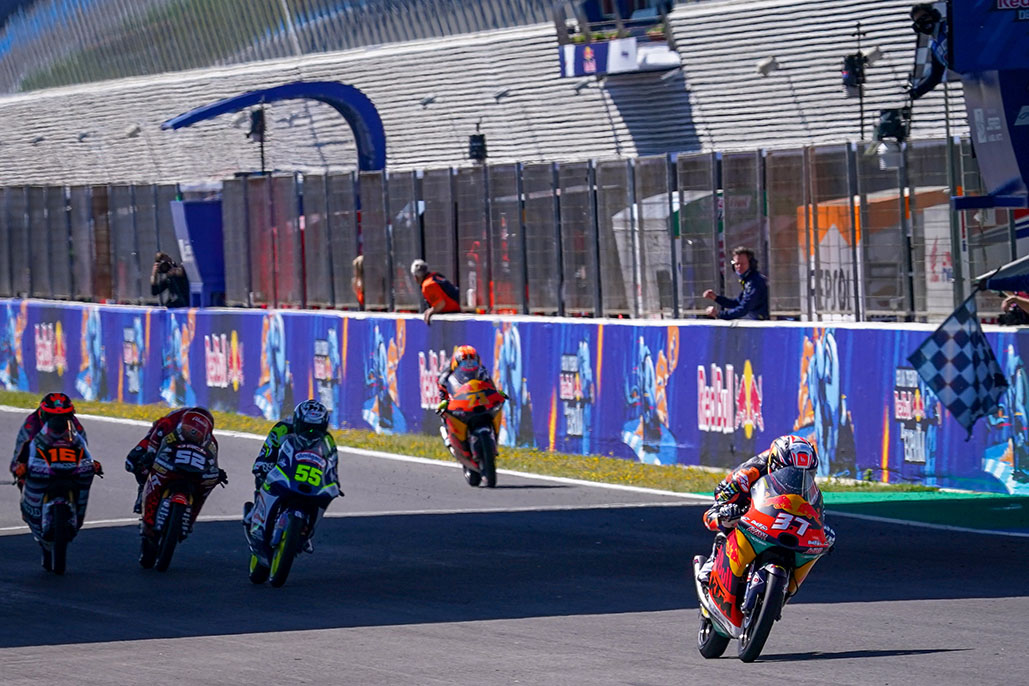 The rookie sensation extends his lead with another milestone win as huge final corner drama shakes up the podium.

Pedro Acosta (Red Bull KTM Ajo) is no stranger to making some history in 2021, but the rookie sensation has done it again in the Gran Premio Red Bull de España, fighting through to the front and escaping some final corner drama for his third win in a row. He’s the youngest rider ever to do that, and he’s also the first rider ever to take four podiums on his first four Grand Prix appearances. Romano Fenati (Sterilgarda Max Racing Team) took second as the veteran got his gloves off at the front, with Jeremy Alcoba (Indonesian Racing Gresini Moto3) overcoming two Long Lap penalties to complete the podium.

As the lights went out it was Tatsuki Suzuki (SIC58 Squadra Corse) who took the holeshot from pole, the Japanese rider leading the freight train away shadowed by Andera Migno (Rivacold Snipers Team) and Gabriel Rodrigo (Indonesian Racing Gresini Moto3). Rodrigo hit quick for second though, before the Argentinean duelled for the lead and took it after a few exchanges.

Drama then hit for John McPhee (Petronas Sprinta Racing) as the Scotsman crashed out, and more drama wasn’t long coming. After a shuffle just behind saw Rodrigo pull out a small gap, disaster struck as the pack started to close back in. A crash at Turn 7 saw the early leader out the running, with Deniz Öncü (Red Bull KTM Tech3) taking over at the front as he and teammate Ayumu Sasaki made early gains.

By 17 to go, two key contenders were out, those with penalties had started taking their Long Laps, and Acosta was on a charge. Up into second behind the fellow KTM of Öncü, the Championship leader had made short work of his P13 starting position to slot into the front four, and he soon hit the front for the first time not long after.

The freight train was 14 riders at the front as the classic Moto3™ melee began in earnest, but in another blink of an eye a second group managed to tag on to make it 19 riders fighting for 15 points-scoring positions once again. The next man out of that train was sadly polesitter Suzuki though, with the Japanese rider crashing and able to rejoin but then heading into pitlane.

Meanwhile, at the front it was a story of three KTMs and things were getting spicy between Öncü, Acosta and his teammate Jaume Masia. Fenati made for close company in fourth, with Darryn Binder (Petronas Sprinta Racing), Sasaki and Migno the last in a now-breakaway group of seven fighting for the win. That spice, however, made life and pace harder work at the front and soon enough the concertina drew the pack back together. There remained, however, a distinctly orange flavour to the gaggle at the front…

At the exit of Turn 6 on the penultimate lap, there was a heart in mouth moment for Acosta as he had a big moment, leaving Öncü duelling Masia for the lead and a gap back to Fenati and Acosta. After the final corner and the slipstream down the straight, however, the two leaders were back pegged to Acosta and Fenati… and in that order.

Heading into Turn 6 for the last time, there were no repeats of his moment a lap earlier for Acosta. As Öncü defended too hard from Masia, a tiny gap opened on the inside and Acosta needed no invitation. Slamming into the lead it was the number 37 on the verge of history once again, but there was more drama coming at the final corner.

Öncü, after losing the lead earlier, was looking ready to make a lunge and the Turk went for it up the inside, then losing the front and sliding out with a domino disaster: Masia was first collected before Binder also got swiped, with all three down into the run off and Acosta left with a clear run to the line. In the right place at the right time, the Spaniard had closed the door to perfection for his third win in three races.

Fenati avoided the skittle to come through for second, with Alcoba gaining from the crash ahead to convert a difficult race into an impressive ride back through to the podium. Fourth went to Migno as he retained his impressive 2021 consistency, with Sasaki in fifth after another good turn of speed from the Japanese rider fighting at the front.

That’s it from Jerez and another stunner from the man of the moment. What awaits in Le Mans? We’ll find out soon enough with just one weekend off before the French Grand Prix.

Pedro Acosta: “Normally here I have some problems to get the pace for my racing style but the team worked so hard because in Warm Up we were changing the setting a bit to be competitive in the race. Öncü and Romano were in another world, they were so strong, but in the end I knew what the strategy for the last lap was: trying to cross the finish line first. And we’re here again!”

MotoGP™ eSport Championship finely poised after dramatic third round of the...