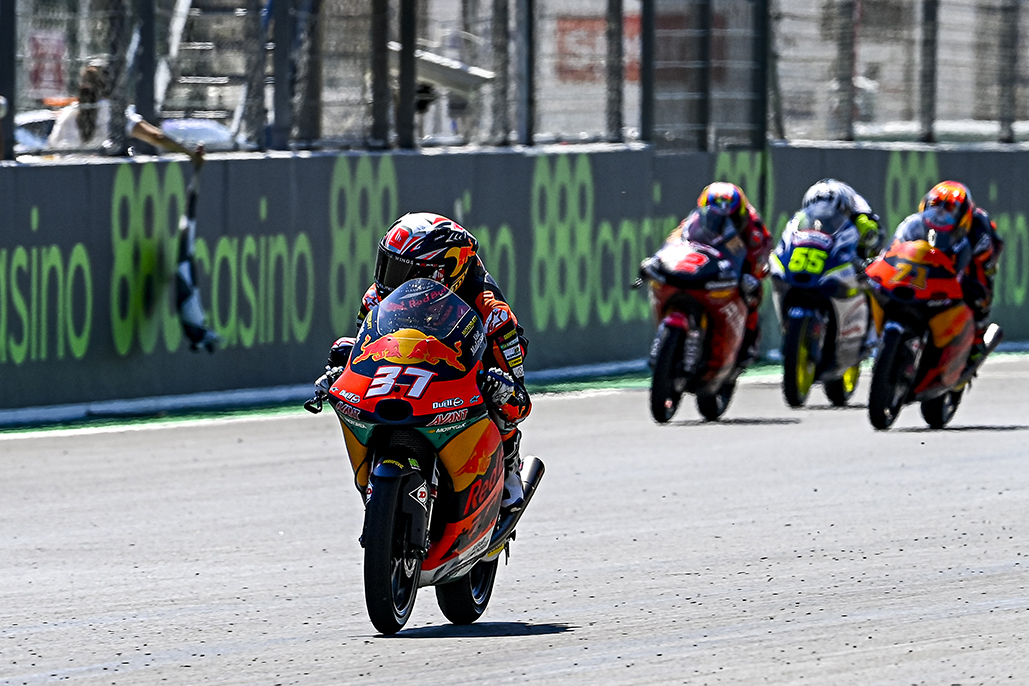 Pedro Acosta (Red Bull KTM Ajo) has done it again! The rookie sensation took a hard-fought victory at the Grande Premio 888 de Portugal after a brilliant last lap move on Dennis Foggia (Leopard Racing), keeping it pinned to the line to make a little more history. After becoming the first rider to win from pitlane in Moto3™ last time out, Acosta is now the youngest rider with three Grand Prix podiums in a row and the first rider since MotoGP™ Legend Daijiro Kato to take podiums on his first three GP appearances. Oh, and Acosta extended his Championship lead to a stunning 31 points after just three races. Behind the duel for the win won by the Spaniard, Andrea Migno (Rivacold Snipers Team) converted pole into a podium after showing great pace all weekend.

It was Migno who took the holeshot, the Italian off like a shot from pole and into the lead ahead of a storming start from Xavier Artigas (Leopard Racing). Foggia slotted into third ahead of Sergio Garcia (GASGAS Valresa Aspar Team), with a lead freight train forming from the off. Darryn Binder (Petronas Sprinta Racing) had his pitlane start first, before five seconds later Jeremy Alcoba (Indonesian Racing Gresini Moto3) and Deniz Öncü (Red Bull KTM Tech3) set off. Then, John McPhee (Petronas Sprinta Racing).

Back at the front, Artigas took the lead at the end of Lap 1, but the rookie’s impressive race would sadly provide the first drama as a touch from Gabriel Rodrigo (Indonesian Racing Gresini Moto3) sent him tumbling out of contention. Rodrigo was given a Long Lap penalty for the incident, and the freight train rolled on.

Foggia was the man doing a lot of the work in the lead, the Leopard rider looking confident out front and Acosta tagged onto him, up at the sharp end immediately alongside teammate Jaume Masia, Garcia, Migno, Ayumu Sasaki (Red Bull KTM Tech3) and a few more familiar frontrunning faces. By nine to go, there was more drama as Kaito Toba (CIP Green Power) collected Izan Guevara (GASGAS Valresa Aspar Team) and the two crashed out. The leading train was 11 riders, with Rodrigo back on their tail after his Long Lap.

The next drama came from Adrian Fernandez (Sterilgarda Max Racing Team) and Tatsuki Suzuki (SIC58 Squadra Corse) as the rookie collected the veteran, leaving a nine-rider group fighting for the win – and the familiar Leopard and Red Bull KTM Ajo colours at the front. As the laps ticked on the fervour went up a few notches, and with four to go the Turn 1 shuffle was getting brutal as Acosta headed a little wide with nowhere else to go, Migno took back the lead and Foggia had to settle for second.

By the penultimate lap, Foggia led Acosta and that’s how the final lap began as just behind, Garcia somehow saved a highside but that was the Spaniard’s podium hopes over. Meanwhile, Masia was up to P3 but then there was yet more drama at Turn 5 as the number 5 slid down the road, his hopes of a race win over too. Now, it was a straight fight between Foggia and Acosta.

Acosta was a monster on the brakes at Turn 11 and clawed back enough ground and then, at Turn 13, the rookie sensation made his move: late on the brakes, up the inside, full lean angle, clean pass. Just two corners remained before a run to the line, but coming over the crest of the final corner, Acosta’s KTM was squirming. Somehow he didn’t crash, but it did help Foggia as the two pinned it and tucked in for the line.

It was only 0.051, but Acosta held it and won his second consecutive race as he extends his points lead to a stunning 31, making yet another statement with another win. Foggia is back on the podium for the second time on the Algarve, and it was Migno who emerged from the battle to complete the podium to take third, just 0.013 ahead of Sasaki as the Japanese rider was back in the fight at the front.

Rodrigo finished P5 despite his long lap, and he beat Niccolo Antonelli (Avintia Esponsorama Moto3) and Romano Fenati (Sterilgarda Max Racing Team) by less than a tenth as the fastest seven riders finish 0.773s apart after some incredible racing again in Moto3™.

Garcia was in amongst it throughout but that late, out the seat moment on the last lap cost the Spaniard and he took eighth. Despite the Turn 5 tumble, Masia salvaged ninth to slot in behind the freight train out front.

Ryusei Yamanaka (CarXpert PrüstelGP) picks up another top 10 in 2021 with P10, and he led Stefano Nepa (BOE Owlride) and teammate Jason Dupasquier (CarXpert PrüstelGP) over the line. Filip Salac (Rivacold Snipers Team) took home P13 from Portimao, with Alcoba and Öncü doing well to pick up the remaining points despite pitlane starts on a five second delay.

That’s it from Portugal. Next up: Jerez and another track Acosta knows well. Will the dream Grand Prix debut season continue? You wouldn’t bet against it!

Pedro Acosta: “It was an amazing race, no? After this difficult weekend with the conditions and everything. I think that my mechanics did an amazing job to do this. Before the race Aki asked me, ‘what is the race strategy?’ and I said ‘have fun for 25 minutes and then take the trophy!’ It’s amazing to be here again!”