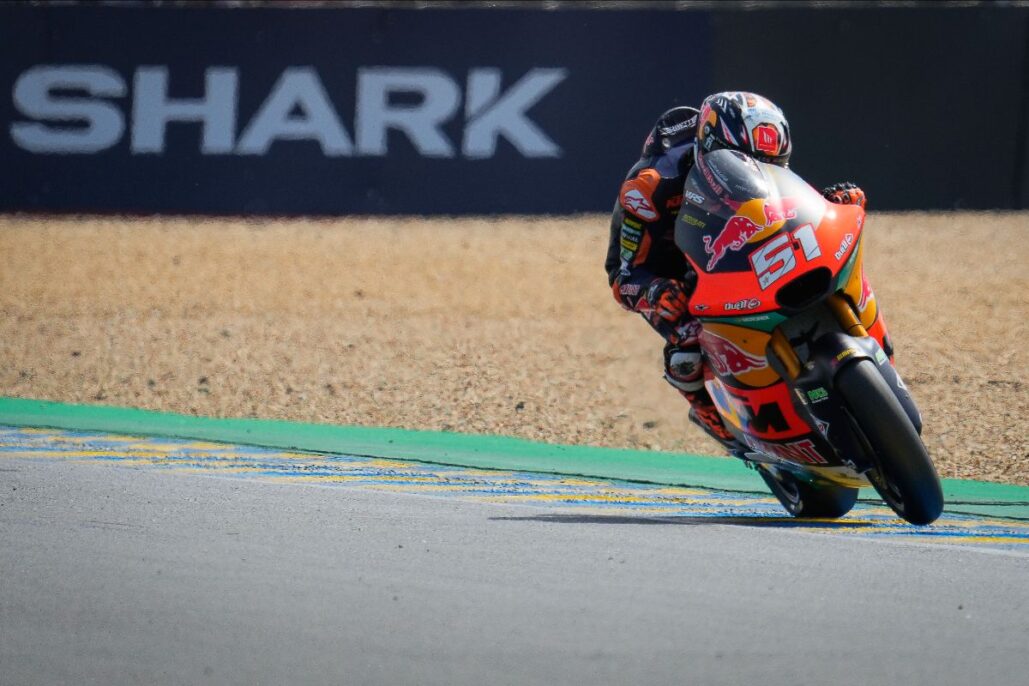 The rookie slams in a new lap record to start the French GP from the front, ahead of Dixon and Fernandez.

Red Bull KTM Ajo’s Pedro Acosta has first pole position in the Moto2™ class after breaking his own, hours-old All Time Lap Record at the SHARK Grand Prix de France. Jake Dixon (Inde GASGAS Aspar Team) qualified second and will be in a Red Bull KTM Ajo sandwich on the front row, with Augusto Fernandez was third in Q2. World Championship leader Celestino Vietti (Mooney VR46 Racing Team), on the other hand, could not escape Q1… and he’ll start 19th.

Q1
The story of Q1 was Vietti’s bid to rescue a starting position. The Italian improved on each of his last three laps in the session, but every time, it was only good enough for fifth . The last of those efforts was a 1:36.310 which was just six thousandths of a second slower than Jorge Navarro’s (Flexbox HP 40) best lap, meaning Vietti will launch from 19th on Sunday. Navarro moved through in fourth, with Bo Bendsneyder (Pertamina Mandalika SAG Team), Fermin Aldeguer (MB Conveyors Speed Up) next up and Lorenzo Dalla Porta (Italtrans Racing Team) top to move through.

Q2
Sam Lowes (Elf Marc VDS Racing Team) was the early pace-setter in the second stanza of qualifying, but then came a highside at Garage Vert (Turn 8). The Briton appeared winded, taking some time to get to his feet before riding a scooter back to the paddock, as the 1:36.071 which he set on his second flyer looked vulnerable. He’ll be reviewed on Sunday morning to check he is fit to race.

Ultimately, the front row lap times would all come in the 11th minute of the session. Fernandez was first to better Lowes’ marker when he set a 1:35.963, only for FP3 fast man Acosta to pip his team-mate with a 1:35.803 as he followed him across the line. Then, moments later, Dixon split the KTM Ajo duo with a 1:35.92. No one else beat Lowes’ time, however, meaning the Briton is set to start from fourth position when lights go out on Sunday afternoon.

The Grid
Behind Acosta, Dixon, Fernandez and Lowes, Albert Arenas (Inde GASGAS Aspar) qualified fifth on a 1:36.088. He will be joined on Row 2 by Alonso Lopez, who is in full-time at MB Conveyors Speed Up and has so far had the upper hand on deservedly hyped teammate Aldeguer in France.

Aron Canet (Flexbox HP40) took seventh, and Ai Ogura (Idemitsu Honda Team Asia) was eighth with the only flying lap which he could get in before crashing at La Chapelle. Rounding out the top 10 were Bendsneyder and Tony Arbolino (Elf Marc VDS Racing Team), who’ll be looking for more on Sunday – as well FP1 fast man Somkiat Chantra (Idemitsu Honda Team Asia) in 11th after he took a tumble at Chemin aux Boeufs.

Pedro Acosta: “In recent races, we have had the speed, but we haven’t finished the weekend so well. Anyway, finally here, we are a little bit stronger than in Jerez. We only have to take the vision in the front and just finish the race the best we can.

“It’s not easy when you are World Champion, and then you are P7 or P10. But, Aki and Remy helped me to understand that I had to take my time and the results are finally going to plan. If it’s not this race, it’s going to be the next one. They understood me when I said, ‘But this is not my position, P7,’ but they helped me to change my mind a little bit.”