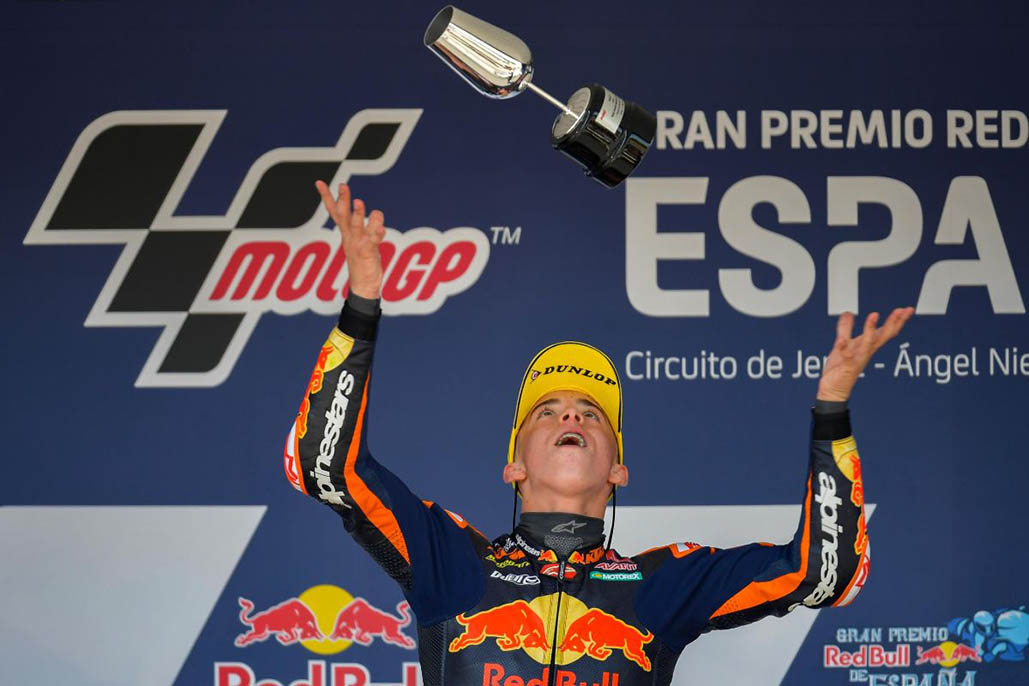 The history-maker’s run of form is a force of nature. But will Le Mans prove a different challenge?

The races keep coming and Pedro Acosta (Red Bull KTM Ajo) just keeps stealing the headlines. He’s now the only rider in history to have ever taken four podiums in his first four Grands Prix, despite saying of Jerez that it’s somewhere his riding style doesn’t suit, but now it’s Le Mans in the crosshairs and that’s unfamiliar turf for the number 37. Qatar was, of course, the same, and that went pretty well for the now-Championship leader. But with pre-season testing beforehand there was a little more time to get to know the venue, so the Sarthe circuit is most definitely a whole new challenge in terms of both the track itself and the position the history-maker finds himself in.

With such a mammoth 51-point lead, however, there’s room to “relax”. The Spaniard enjoys the highest leading margin after the opening four races of a 125cc or Moto3™ season since the current point system was introduced in 1993. But even before that was the case, the words of Marc Marquez (Repsol Honda Team) in the Jerez pre-event Press Conference ring true: tenth is ok. A win is ok. A point, a crash… it’s all ok. Because regardless of the records set already, he’s still a rookie.

That said, there are a few riders who’ll be ignoring that and heading into Le Mans looking to depose the new ruler. Niccolo Antonelli (Avintia Esponsorama Moto3) arrives closest on the chase thanks to his consistency – and a Doha podium – followed by Andrea Migno (Rivacold Snipers Team), who has one 0 but two fourths and a third. Their ability to stay out of trouble, in terms of either causing it or getting tangled in it, has paid dividends and they’ve both been quick to boot. Migno also took a top five in France last season, and the year before, prefaced by a podium in 2018. On both past and current form, the Italian has arguably the best CV at Le Mans.

Then there’s Romano Fenati (Sterilgarda Max Racing Team), fresh from a podium and some similarly artful dodging of the drama that befell many at the final corner. The veteran seemed to consciously stay out the melee before striking late, and he’s another who’s been consistent. He also has form at Le Mans and although it’s from 2016, he finished just 0.099 off the win in second. The fact that a 0.099 deficit has to be quantified as being second place also speaks to how incredibly close the class is. The man who followed him home in Jerez, meanwhile, is looking for a little less drama in a different manner: Jeremy Alcoba (Indonesian Racing Gresini Moto3) may once again have impressively recovered from a Long Lap Penalty to take a rostrum finish, but he’ll want to head into race day with a clean sheet this time round and rid himself of some Sunday hurdles.

So what of that aforementioned drama? Deniz Öncü (Red Bull KTM Tech 3) would have made different headlines in Jerez if not for that late move that set off the skittles, but the Turk nevertheless put in an impressive performance and will be looking for more of that race-leading feeling. Jaume Masia (Red Bull KTM Ajo) and Darryn Binder (Petronas Sprinta Racing) will also be focused on bouncing back as soon as possible; both also fuelled by the knowledge that they were once again fast, just unlucky. Experience remains on their side.

Ayumu Sasaki (Red Bull KTM Tech 3) was another who was fast and after his late race blunder first time out in 2021, the Japanese rider has since been a consistent force in the front freight train on his best roll of continual form pretty much ever. Can he crank that up even further this time? Gabriel Rodrigo (Indonesian Racing Gresini Moto3) will also want redemption after a highside out the lead, and John McPhee’s (Petronas Sprinta Racing) bad luck only continued in the Spanish GP. But the Scotsman is the only man in the field who’s won before at Le Mans… so could this be the turnaround he needs?

We’ll find out on Sunday the 16th of May as Pedro Acosta takes on Le Mans, and the rest of the field take on Pedro Acosta. The lights go out for the lightweight class at 11:00 (GMT +2) local time, so make sure to tune in!