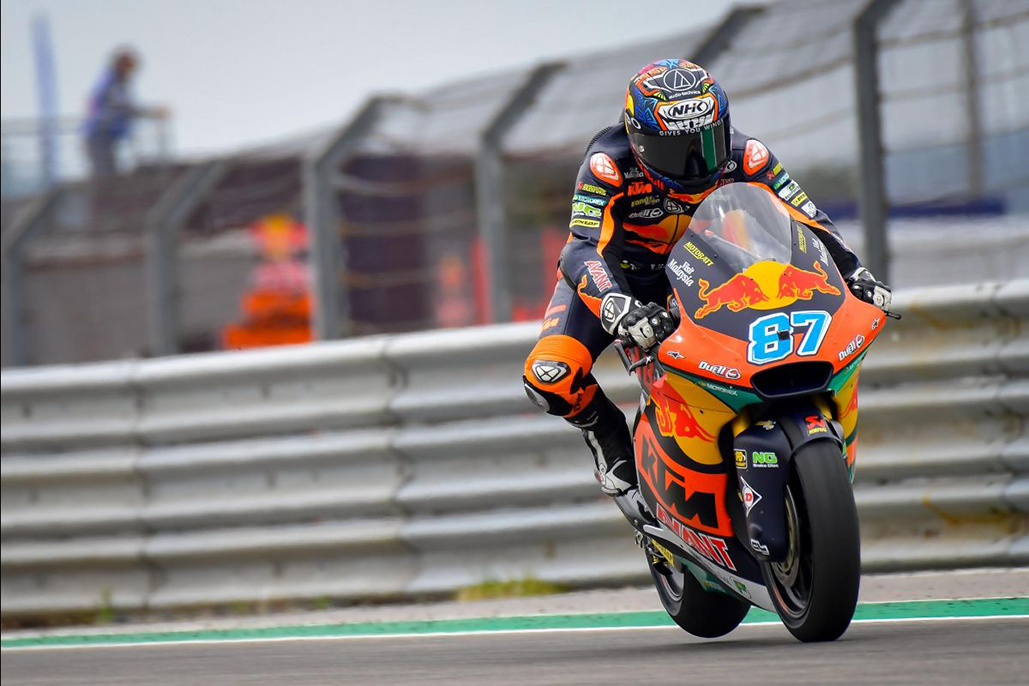 The Australian made a little history in Germany to pull clear. Can anyone strike back at the Cathedral?

Remy Gardner (Red Bull KTM Ajo) may have been beaten to a first win of the year by his rookie teammate Raul Fernandez, but since then the Australian has put the pedal to the metal. Now it’s three victories in a row and he’s the first Australian to do that in the intermediate class, gaining some good ground in the standings. Not only that, but his teammate crashed out in Germany – a first error of what’s nevertheless an incredibly impressive debut year – and it’s now a 36-point cushion for Gardner at the top. So will he play it safe?

Unfortunately for the rest of the field watching the number 87 enjoy a somewhat solo track day at the Sachsenring, his calling card in 2021 is already balancing risk and reward better than the rest – as well as staying just as devastatingly quick. So why would it change now? The pressure of taking a win is off, some pressure is off in the standings and he’s already made a little history. The speed the Australian has often shown before has now been paired with consistency, and it’s proving a problem for the rest of the field.

For Raul Fernandez on the other side of the garage, the pressure is on a little more after his crash – certainly in the standings. But then, as a rookie winning races, his performance remains one of the biggest standouts of the season so far in any class, and the season remains long. Can he fight back at Assen? And will we get a rerun of the incredible speed he and Gardner showed as they disappeared at the front in Germany early on?

Marco Bezzecchi (Sky Racing Team VR46), meanwhile, remains on the hunt for more than a podium, but the Italian did do a sterling job at the Sachsenring to go from a difficult Friday to the podium on Sunday. So too did Aron Canet (Aspar Team Moto2), who took his second rostrum of the season in second on a great day for the Boscoscuro chassis, with three in the top nine for the first time. Can that form continue at Assen?

Fabio Di Giannantonio (Federal Oil Gresini Moto2) will be looking for a bit more after ending up off the podium, and so too will Sam Lowes (El Marc VDS Racing Team) and his teammate Augusto Fernandez, the most recent winner at Assen in Moto2™. Joe Roberts (Italtrans Racing Team) and Xavi Vierge (Petronas Sprinta Racing) both crashed late and will want some redemption too, and Jake Dixon (Petronas Sprinta Racing) had an incident with Augusto Fernandez. To complicate their lives a little more, both Roberts and Dixon have Long Lap penalties for Assen as well… the former for crashing under yellows, the latter for the aforementioned incident. Dixon does, however, have a fair bit of experience at Assen from the BSB paddock.

There are some shoutouts from a little further down the order too: Albert Arenas (Aspar Team Moto2) was top rookie and took his best Moto2™ result yet by far, and injury replacement Alonso Lopez – then at Flexbox HP 40, this weekend back at +Ego Speed Up – equalled his European Moto2™ Championship teammate Fermin Aldeguer’s best stand in ride of P12 from Mugello. Their rivalry won’t continue at Assen as Aldeguer heads back to MotoE™, but Lopez will be gaining more track time on the Triumph back on a Boscocuro chassis.

Gardner heads the field on the way in, and he will most definitely do the same on the way out with 36 points in his pocket. But can he make it four in a row? Can Fernandez strike back? Or can those on the chase close down the Red Bull KTM Ajo duo just before we head into the summer break? Find out in the Motul TT Assen on Sunday at 12:20 (GMT +2).