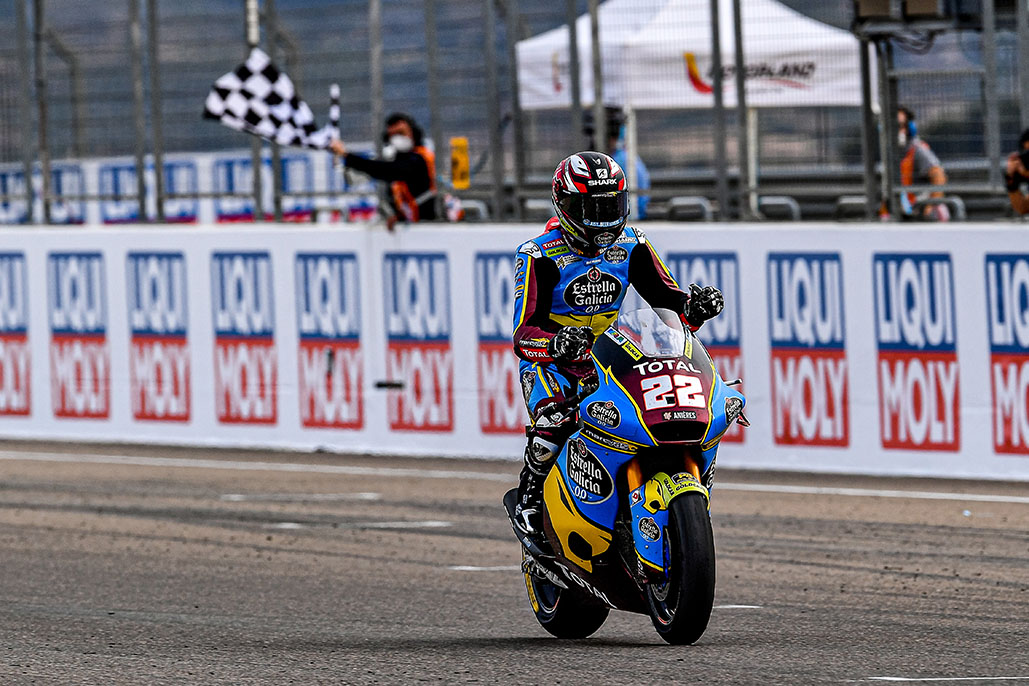 The Brit dominates and takes the points lead, with ‘Diggia’ back on the box and Bastianini doing some damage control in third.

Not since Phil Read in 1971 has a Brit won three intermediate class Grand Prix races in a row, but Sam Lowes (EG 0,0 Marc VDS) now has. The number 22 dominated from the start to pull over eight seconds clear by the flag in the Gran Premio Liqui Moly de Teruel, the 25 points giving him the Championship lead. Second went to Fabio Di Giannantonio (Lightech Speed Up) as the Italian got some redemption after a heartbreaker in the Aragon GP, with Enea Bastianini (Italtrans Racing Team) doing some solid damage control to take third and stay on the podium.

From pole, Lowes got a perfect getaway and made the dream start. The holeshot was his as Jorge Navarro (Lightech Speed Up) made an shocker from P2 on the grid, with asRemy Gardner (Onexox TKKR SAG Team) grabbing second. Di Giannantonio was soon past the Australian though at Turn 5 and the fast-starting Jake Dixon (Petronas Sprinta Racing) was soon P3 from the third row of the grid. Lowes was powering off into the distance though and on Lap 2, his gap was 1.5 seconds over Di Giannantonio and continuing to rise.

On Lap 3, Gardner and Bastianini were through on Dixon in quick succession, with Lowes’ lead up to 1.7. Drama then unfolded in the Championship chase once again, with bad luck hitting Marco Bezzecchi (Sky Racing Team VR46) twice in a week as the Italian was down at Turn 1, losing the chance at more points to cut his deficit. Can he bounce back at Valencia?

Up front, Lowes’ lead was now at the two second mark, and Diggia was 1.3 clear of Gardner in the battle for the final podium place. Bastianini was on a charge though, past Gardner not long after, and with Dixon and Marcos Ramirez (Tennor American Racing) in hot pursuit. Lowes’ lead continued to soar and with Diggia also showing cracking pace, the Italian was leaving compatriot Bastianini behind in the close fight for fifth with seventh place Jorge Martin (Red Bull KTM Ajo), Augusto Fernandez (EG 0,0 Marc VDS) and Hector Garzo (Flexbox HP 40) joining the battle too.

Meanwhile, it was a tough race for former points leader Luca Marini (Sky Racing Team VR46). The Italian was down in P14 behind Joe Roberts (Tennor American Racing) and Xavi Vierge (Petronas Sprinta Racing), before Bo Bendsneyder (NTS RW Racing GP) then overtook the Italian and suddenly, Marini was P15 with 12 laps to go, only on for a point. Then, fellow VR46 Academy rider Stefano Manzi (MV Agusta Forward Racing) made it even worse as he demoted Marini to P16…

By then, Lowes was a comfortable four seconds ahead of Di Giannantonio, who was two seconds ahead of Bastianini in a tense as you were at the front. The battle for the top five was anything but that as Fernandez, Martin, Dixon and Navarro diced it out, with everything still to play for.

There were no such battles for Lowes, however. The Brit was over eight seconds clear by the flag, winning in dominant style and leading from lights to flag to stamp some authority on the Championship to boot – now seven points clear of Bastianini. Di Giannantonio took second and was back on the box after heartbreak last weekend, able to keep some time in hand ahead of Bastianini. For ‘Bestia’ though, it was exactly what he needed – more consistent podiums, with Lowes seemingly having more than the rest at MotorLand.

In the end, Gardner held onto P4 by just three tenths over a hard-charging Navarro as the Australian and Spaniard rounded out the top five, that scrap rolling on to the flag. Martin took P6 and Dixon got the better of Fernandez in the latter stages to take P7, the Spaniard forced to settle for eighth. Ramirez beat teammate Roberts by a second as the two American Racing riders finish P9 and P10 respectively.

And then came Marini. The Italian dug deep to claw back up to 11th place and he takes home some points, but the number 10 does now drop 23 points off Lowes in the title race to make it a triple-header of races to forget for the former Championship leader.

Three wins from three sees a high flying Lowes take the title lead with just three races to go in 2020. Seven points split the British rider from Bastianini, with Marini and Bezzecchi losing a lot of ground in Aragon. A weekend off now follows before two Valencia races and the season finale in Portimao come thick and fast, and the Moto2™ Championship scrap looks set to go all the way to the wire.

Sam Lowes: “I’m really happy because last weekend we were strong, to win the race you have to finish but I felt like Bezzecchi crashed but he had the win, Diggia crashed… it was a great ride but I wanted to improve this weekend and today there was no doubt. I was the fastest guy all weekend, I made a great start and made the race. This is really important for me, there are three races to go, I’m in a good way but to win a race like this takes so much confidence. I said to myself before these three races, Aragon being a track I love, that if I can win these three then I have a chance at the Championship. I didn’t expect some results to go my way, but now we’re already leading and have a good chance. I’m really happy, the team has done an amazing job to improve from last weekend to this, that’s the sign of a great team when they give you a few tenths you don’t have to find yourself! Thanks to everyone that’s supported me the last couple of years and we’ll give everything in these last three races.”