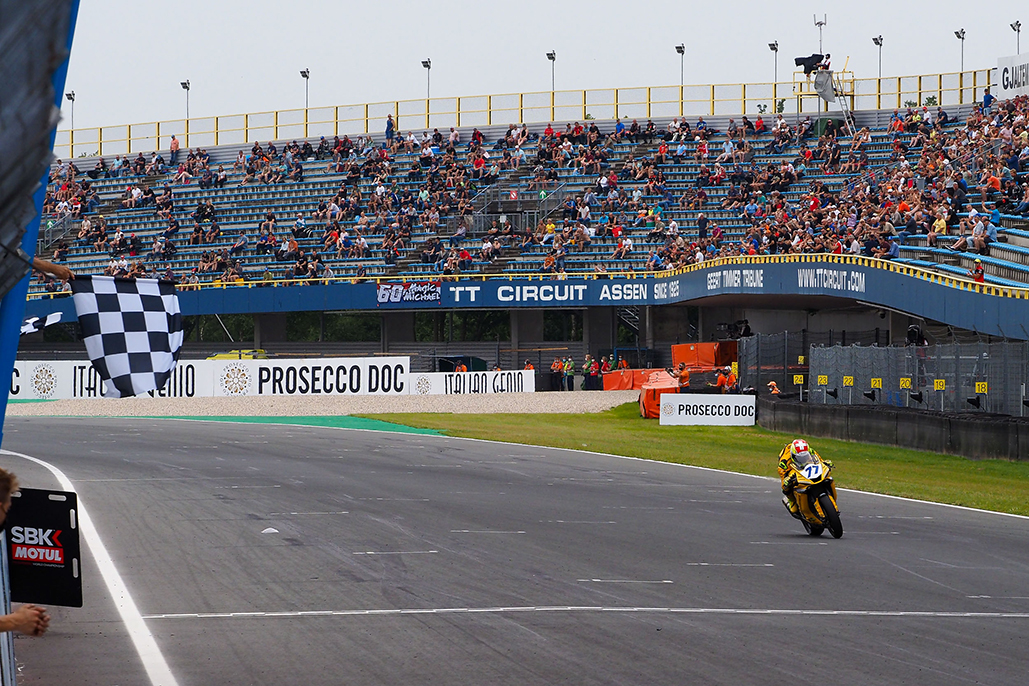 The special Ten Kate Racing Yamaha livery enjoyed a successful first race outing at the TT Circuit Assen as Dominique Aegerter (Ten Kate Racing Yamaha) claimed his fourth consecutive FIM Supersport World Championship victory after a thrilling three-way battle at the front of the field in Race 1 for the Prosecco DOC Dutch Round.

Steven Odendaal (Evan Bros. WorldSSP Yamaha Team) got the holeshot into Turn 1 to take the lead but soon found himself down in third place on the opening lap as both Aegerter and Philipp Oettl (Kawasaki Puccetti Racing). As seen before in 2021, the lead group contained plenty of riders all looking to break Aegerter’s winning streak.

After five laps, the lead trio of Aegerter, Oettl and Odendaal were the leading trio and all set fastest laps of the race to start pulling away from the chasing pack, with Aegerter continuing to lead the race despite Odendaal, in third, being the fastest rider of the three. Oettl had been in the lead of the race before falling back behind Aegerter and Odendaal, with the pair running the SCX tyre while Oettl used the SC0.

Oettl was dropped by Aegerter and Odendaal as the race went on with Aegerter, riding a special livery for the Ten Kate Racing team, able to withstand the challenge from Odendaal as the Swiss rider extended his Championship lead over the South African, with Aegerter consistently on lap record pace including setting a new record of 1’37.688s. After 18 laps, Aegerter finished three seconds clear of Odendaal with Oettl claiming third.

P1 Dominique Aegerter (Ten Kate Racing Yamaha)
“I think it’s a very good day for me! Not only for me, but for the team, for Yamaha, all my sponsors, the Dutch fans, it’s very nice to have pole position, fastest lap, victory and extend the Championship lead. Tomorrow is the next race, so we try to repeat it. It wasn’t so easy; the conditions were a little bit different and also some riders used different rear tyres. I think tomorrow will be a cool race again and the goal is to fight again for victory.”

P2 Steven Odendaal (Evan Bros. WorldSSP Yamaha Team)
“We decided to gamble with the harder tyre, which unfortunately just didn’t pay off towards the end of the race. I lost grip towards the end. I’m happy, 20 points in the bag and it’s great to be racing at Assen.”

P3 Philipp Oettl (Kawasaki Puccetti Racing)
“I feel really good, to be honest. This morning, the Superpole session was great. I had a good feeling with the bike. Of course, after four laps all the time you put on a new tyre. I knew in the race I had to go for a softer option, the SCX tyre, as otherwise I could not stick with the front group of Aegerter and Odendaal. I hoped those two guys were fast enough and towing me away from the other group. Sometimes, it goes horribly wrong but today was a good day and everything went fine.”