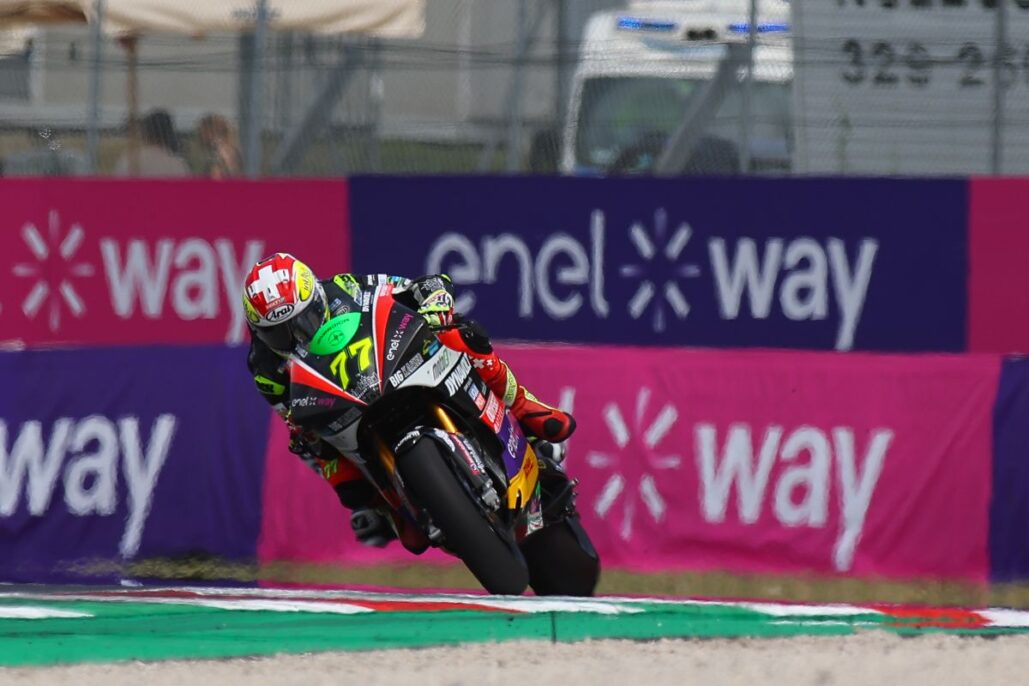 The Swiss rider takes pole ahead of Zannoni and Casadei as MotoE™ qualifies at Mugello for the first time.

Dominique Aegerter (Dynavolt Intact GP MotoE™) has marked himself as the rider to beat in the FIM Enel MotoE™ World Cup’s first ever round at the Autodromo Internazionale del Mugello. He took the lead in the World Cup with a win in Race 2 at Le Mans a fortnight ago and now has pole position for the two races at the Gran Premio d’Italia Oakley, having also set the pace in both practice sessions.

Joining the Swiss rider on the front row in Italy will be two home heroes, with Kevin Zannoni (Ongetta Sic58 Squadracorse) qualifying second-fastest and Mattia Casadei (Pons Racing 40) third, the latter making it a clean sweep of front row starts in 2022.

Q1
It was Marc Alcoba (Openbank Aspar Team) and Kevin Manfredi (Octo Pramac MotoE) who made it through, with Hikari Okubo (Avant Ajo MotoE™) and Hector Garzo (Tech3 E-Racing) arguably surprises left behind, given both are solidly top 10 in the World Cup standings. However, they still earnt spots on Row 4 of the grid, with Okubo 11th and Garzo 12th.

Aegerter was not willing to settle, either, clocking a 1:59.205 next time around which moved him to 0.268 seconds clear of Zannoni. Beyond that, the margins were close, with Casadei 0.062 seconds away from second place, and Eric Granado (LCR E-Team) missing the front row by only 0.002 seconds. A winner of both races at Jerez just a few weeks ago, Granado is set to line up in fourth for the two Mugello encounters, with Matteo Ferrari (Felo Gresini MotoE™) fifth and Q1 graduate Manfredi sixth.

Dominique Aegerter: “I’m very happy that I can start from pole position. Last time in Le Mans, it was very, very close, but we started perfectly this weekend, first in both practice sessions and we have strong pace. It’s six laps tomorrow and Sunday, and the conditions are really hot outside, the track temperature is really hot, but the Dynavolt Intact GP MotoE team has done a fantastic job. They have made a nice set-up for Mugello, our first time here, and I love to ride here. I hope many fans come from Italy and also Switzerland, and I will try to get a good result for them.”