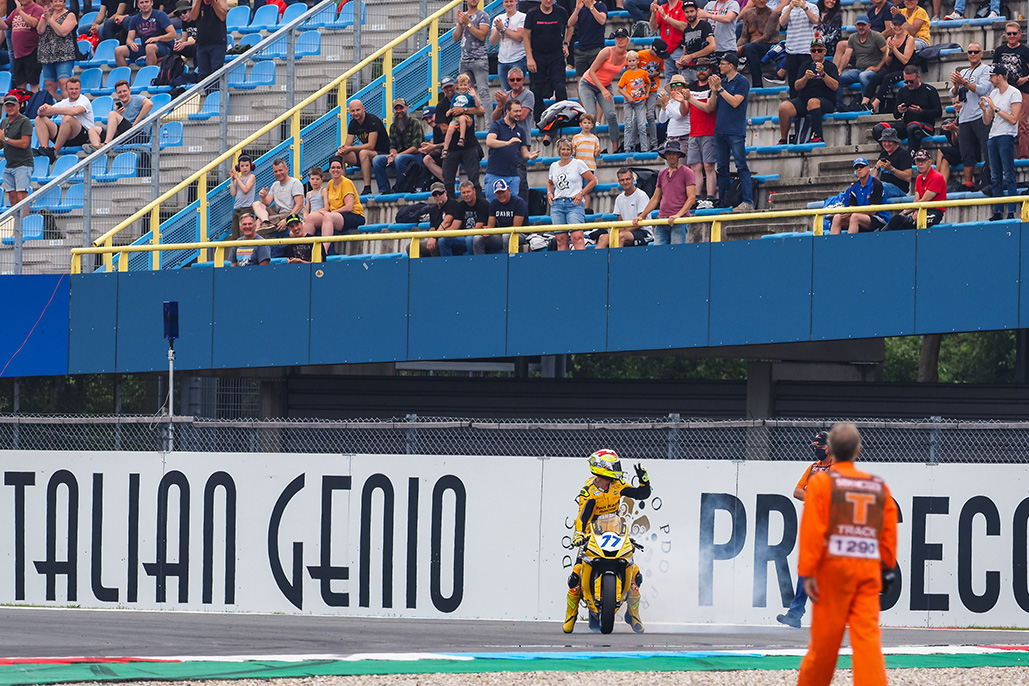 Dominique Aegerter dominated the race to make it five victories in a row as 2019 Champion Randy Krummenacher claimed his first podium since returning to the Championship.

Racing for the FIM Supersport World Championship at the TT Circuit Assen came to a thrilling conclusion in the Prosecco DOC Dutch Round as Dominique Aegerter (Ten Kate Racing Yamaha) claimed his fifth consecutive victory and his second in his team’s home race, while Randy Krummenacher (EAB Racing Team) battled his way to the podium for the first time since 2019.

In a typical 2020 WorldSSP race start, the lead group were battling nose-to-tail and elbow-to-elbow throughout the opening few laps, with Steven Odendaal (Evan Bros. WorldSSP Yamaha Team) able to take the lead on the opening lap despite Aegerter getting a good start from pole position into Turn 1.

German Philipp Oettl (Kawasaki Puccetti Racing) was able to take the lead of the race as he did in Race 1 on Saturday, but soon found himself behind Aegerter when the Swiss rider passed Oettl on the fifth lap, having passed Odendaal the lap before to move into second place as he looked to make it two wins in his special yellow livery.

Randy Krummenacher (EAB Racing Team) finished in third place to return to the podium in WorldSSP, with Bernardi in fourth. Krummenacher’s podium means it’s the first time two Swiss riders have stood on the rostrum in WorldSSP, while Switzerland now has as many wins as Germany in WorldSSP with 11.

P1 Dominique Aegerter (Ten Kate Racing Yamaha)
“It was a very great race. At the start, we had some small fights with Oettl and Odendaal. I could make the pace afterwards. The track condition was not like in the Tissot Superpole but the lap time was quite fast and I could make a gap. Thanks to the Ten Kate Race team, they gave me a perfect bike for their home Round. It’s very nice with the special livery. For sure, this weekend we made some history for Ten Kate and I hope the fans here enjoyed the nice weather in the Netherlands and thanks for your support.”

P2 Philipp Oettl (Kawasaki Puccetti Racing)
“It was a really good weekend for the team. We had some problems towards the end of the race because I chose again the softer tyre. Like yesterday, I wanted to stay with Domi as long as possible and create a gap. It was an intense race. The tyre moved on the rim a little bit, so I lost the weight, I had a lot of vibrations in the last few laps and lost a lot of time. In the end, it was a similar race to yesterday. Domi is in a league of his own but I think in Most we can work in the Free Practice sessions to have more grip towards the end of the race and the next step will be to stay with him for the whole race.”