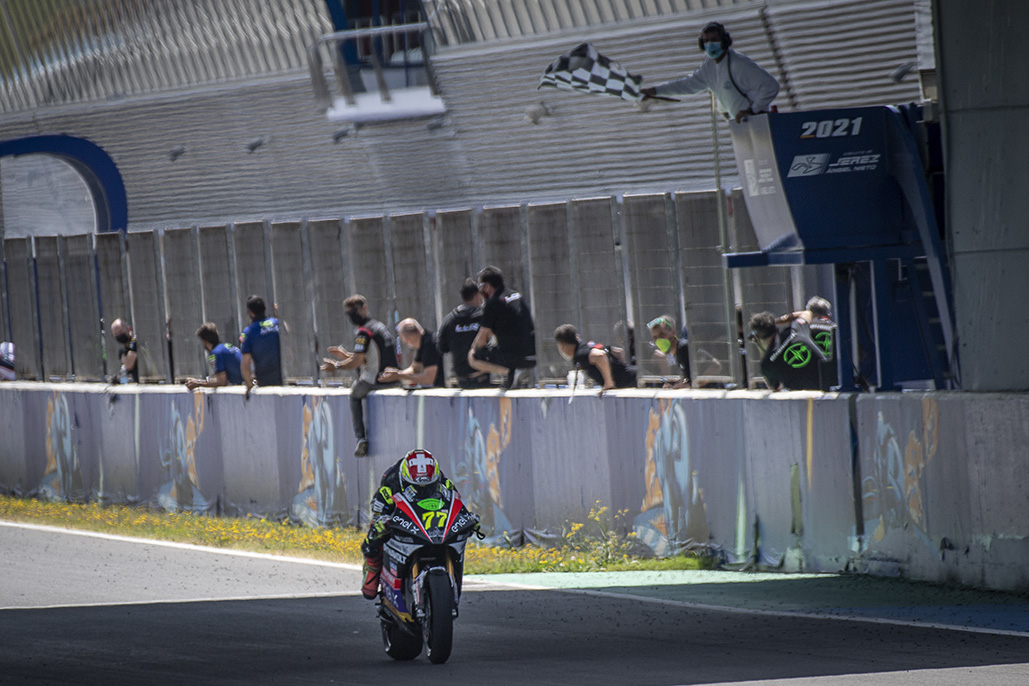 After topping the timesheets on Day 1 at the second and final Official FIM Enel MotoE™️ World Cup Jerez Test, Dominique Aegerter (Dynavolt Intact GP) continued to assert his dominance on pre-season by finishing 10 seconds clear of the pack. Rookies Fermin Aldeguer (Openbank Aspar Team) and Miquel Pons (LCR E-Team) completed the podium in the eight-lap race simulation, with both only continuing to impress as they get ready to make their MotoE™ debuts.

During the race simulation, Aegerter’s best lap time was a 1:47.259 – the fastest-ever MotoE™️ lap at the Circuito de Jerez-Angel Nieto – and the Swiss rider was more than content to lay down another benchmark on Tuesday. Not so reigning Cup winner Jordi Torres (Pons Racing 40) and MotoE™ race winner Eric Granado (One Energy Racing), however, as the two didn’t go out guns blazing in the simulation, instead heading wide and then concentrating on using the track time for themselves. As one of the pre-season favourites dominated, that left two more crossing the line in P10 and P11 respectively, Torres beating Granado and both keeping their cards close to their chest.

For Aldeguer and Pons, meanwhile, it’s been a battle already to decide the best rookie as the former stole headlines in the first test before the latter did on Day 1 in the second. When the lights went out though, it was Aldeguer who just came out on top, getting the better of Pons by less than half a second.

There was another practice session after the race simulation too, with Granado the fastest rider thanks to a 1:47.681. That lap from the Brazilian was 0.248s better than Aegerter’s best outside of the race simulation, putting him on top of the combined times from practice sessions ahead of the Swiss rider. On practice pace, it’s Tulovic who completes the top three, 0.404s behind.

Stay tuned for more on Wednesday as the final testing for the 2021 FIM Enel MotoE™ World Cup gets underway, with the countdown to Round 1 starting soon.

Summer’s not over… Drop by ‘The Ride In Cinema’ this Saturday...