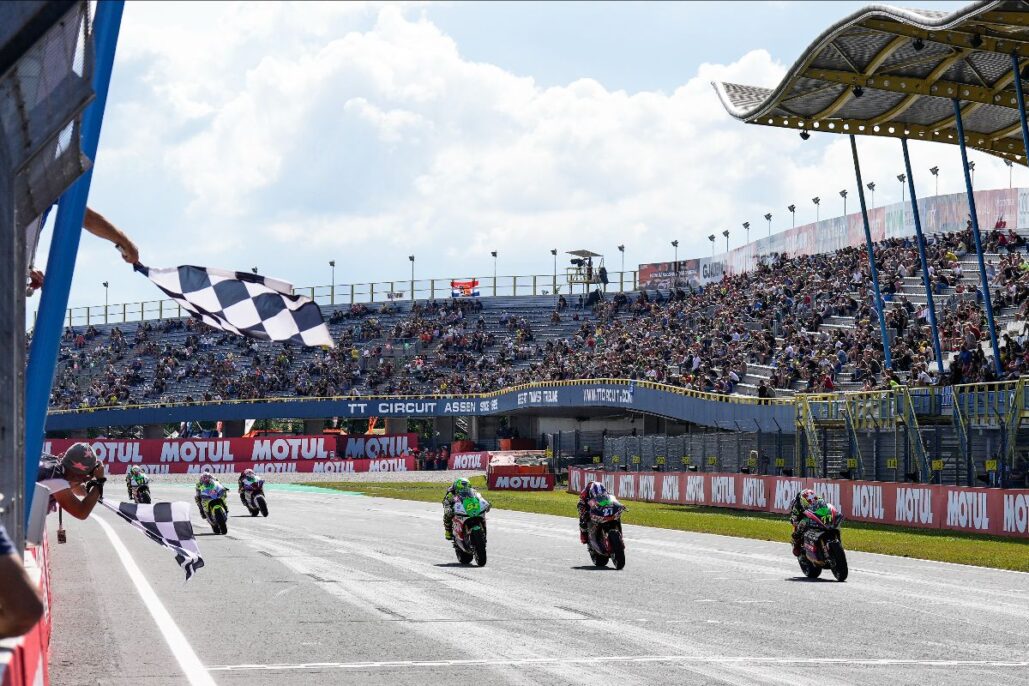 The best MotoE™ race ever? Aegerter, Granado and Casadei fight to the wire.

0.081 decides the podium as the first race at the Cathedral delivers a thriller

We’ve said it before and we’ll say it again, the racing in the FIM Enel MotoE™ World Cup is truly some of the best. That’s never been more true than of Race 1 at the TT Circuit Assen, with just 0.081 covering the podium as Dominique Aegerter (Dynavolt Intact GP MotoE™), Eric Granado (LCR E-Team) and Mattia Casadei (Pons Racing 40) took the show to the wire, with the Swiss rider coming out on top – just. Granado took second out of the final chicane by only 0.009, with Casadei losing out after a late attack.

Aegerter had qualified on pole but the battle for the lead was initially between Granado and Casadei, who went side-by-side into the first corner. However, both ran wide exiting Haarbocht and Matteo Ferrari (Felo Gresini MotoE™) emerged in the lead, ahead of Aegerter and Miquel Pons (LCR E-Team). Granado and Casadei slotted into fourth and fifth, but both were back ahead of Pons within a lap.

Granado soon proved the master of the fast Ramshoek left-hander, overtaking Aegerter there on Lap 3 just when it looked like Ferrari might be starting to creep away, then passing the 2019 World Cup winner himself another lap later again. Ferrari reclaimed the lead from the Brazilian as they ran through the Ossebroeken section on Lap 5, but Granado got back in front later that lap at Stekkenwal.

Meanwhile, a big battle had broken out for third between Aegerter, Casadei, and Pons, but the current World Cup leader had shaken those off when he launched an attack on Ferrari. He squeezed past the Gresini rider into the Geert Timmer Chicane on Lap 6, and Ferrari dropped towards the back of the leading pack when he had two big wobbles as he tried to take second position back at the start of Lap 7, with Casadei inheriting third position.

Aegerter then got underneath Granado at Strubben, but that gave them a slow entry down the back straight and Casadei stormed by both on the run into the Ruskenhoek, before Granado then re-passed Aegerter. The Swiss rider snatched the spot back just a few corners later at the Geert Timmer Chicane though, and making a little contact as he did so and that losing Granado a handful of tenths.

Despite being back in the runner-up position with a lap to go and a World Cup lead to protect, Aegerter didn’t seem in the mood to simply collect points. He dived past Casadei at Strubben but could not make the move stick and very nearly got chucked off his Energica Ego Corsa when he opened up the throttle again. Still, the Swiss rider tried again at Ramshoek near the end of the lap, but it all came down to the final chicane.

Granado was back on their tail as Aegerter went for the lead just ahead, and the Swiss rider just about shut the door on Casadei to secure the win. Granado needed no second invitation to try his own attack, blasting just past the Italian to grab second by mere thousadnths.

After some early heroics and then excellent damage limitation, Ferrari took fourth ahead of Hector Garzo (Tech3 E-Racing) in fifth, just 0.960 seconds behind the winner. Marco Alcoba (Openbank Aspar Team) had been in the leading group on the last lap but crashed at high speed at the Ramshoek, with an x-ray clearing him of a fractured left elbow but another medical review coming on Sunday.

After a breathtaking first showdown of the weekend, Aegerter has increased his margin to 34 points, with Granado second and Ferrari another eight points behind in third. What will happen in Race 2? Tune in at 15:30 (GMT +2) on Sunday to find out!

Dominique Aegerter: “The race was exciting. My start wasn’t good and I fall from pole position a little bit backwards. I was always around second or third. I knew that it was just 8 laps, so you need to stay in the front, close to the first position or in first. We had amazing battles with Casadei, Ferrari and Granado. It wasn’t easy, there were some crazy overtakes, but we need to take some risks to overtake each other and at the end it was a very good overtake in the final chicane to take the victory. Big thanks to the Dynavolt Intact MotoE Team, that made again a good bike to fight for the podium and for the victory. Tomorrow we have another chance to extend my lead in the Championship.”