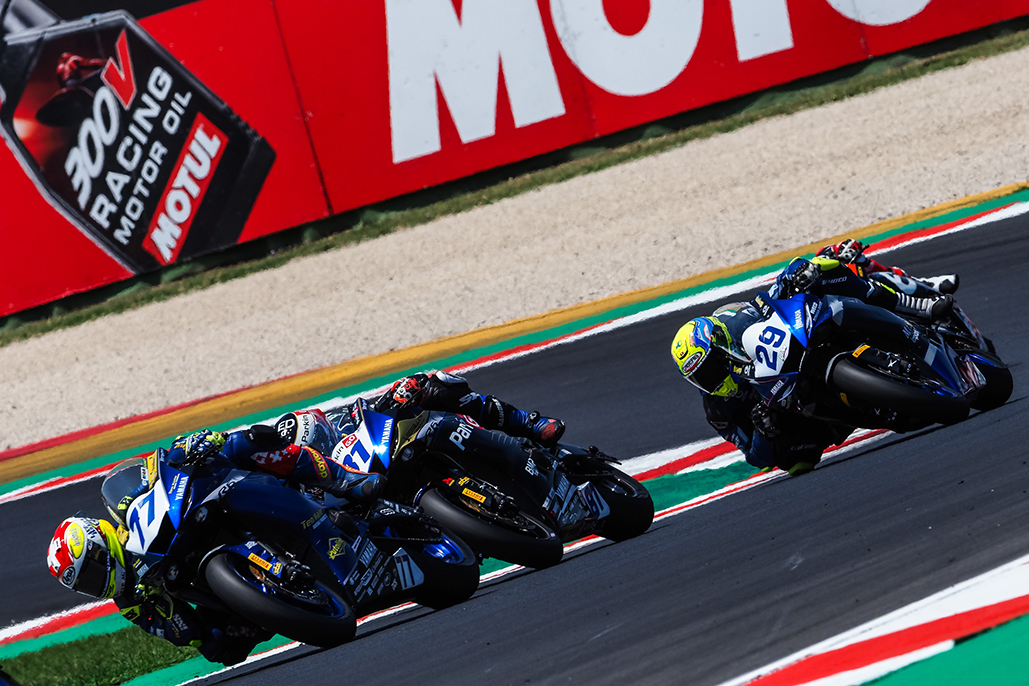 Steven Odendaal had led most of the race, but a late penalty meant Aegerter claimed victory in Race 2 at Misano

Race 2 for the FIM Supersport World Championship was a thrilling battle at the Misano World Circuit “Marco Simoncelli” as Dominique Aegerter (Ten Kate Racing Yamaha) claimed his third consecutive victory in a sensational battle for the Pirelli Made in Italy Emilia-Romagna Round.

Jules Cluzel (GMT94 Yamaha) started the race from fourth place but soon found himself in the lead of the race, moving into second place before Turn 1 and then sweeping around the outside of Dominique Aegerter (Ten Kate Racing Yamaha) around the right-hander of Turn 1, with the Frenchman soon trying to pull away from the field.

South African Steven Odendaal (Evan Bros. WorldSSP Yamaha Team) was also making moves and passed both Aegerter and Cluzel in the opening laps of the race as he took the lead of the race as he went in search of win number four of the 2021 season. The trio were separated just three tenths, with Manuel Gonzalez (Yamaha ParkinGo Team) and Luca Bernardi (CM Racing) closing in on the lead group.

Maria Herrera (Biblion Iberica Yamaha Motoxracing) retired from the race after a crash at the right hander of Turn 4 with the Spanish rider taken to the medical centre for a check-up following the incident. The crash resulted in a Red Flag to be displayed due to track conditions at Turn 4. Can Öncü (Kawasaki Puccetti Racing) crashed out at the final corner just as the Red Flags were shown, and the Turkish rider was unable to re-join the restarted race after he did not get his bike back to the pitlane within five minutes of the Red Flag being shown.

Cluzel repeated his start on the restart as he jumped Odendaal into Turn 1 but it was Marco Alcoba (Yamaha MS Racing) who made the most from the second start with the Spanish rider moving up to fifth place. Aegerter and Gonzalez battled it out for fourth place with 2019 WorldSSP300 Champion Gonzalez aiming for his first podium in the class.

The lead group began to expand as Bernardi brought Raffaele De Rosa (Orelac Racing VerdNatura), Philipp Oettl (Kawasaki Puccetti Racing) and Randy Krummenacher (EAB Racing Team) with the top nine separated by just two seconds on Lap 4 of the 12-lap restarted race. Aegerter soon made his move on Alcoba to move himself up the order into fourth place before Sammarinese rider Bernardi, celebrating his home race, followed him through for fifth place as Alcoba fell down to sixth place.

Gonzalez appeared to have a pace advantage of Cluzel and used this to move himself into second place ahead of the Frenchman with an aggressive overtake on Cluzel at Turn 2 on Lap 9 after closing in throughout the eighth place. Odendaal had looked like he would return to winning ways, but a late-race Long Lap Penalty for track limit infringements meant the South African finished fifth. As Odendaal did not have time to take the penalty, it was converted into a three-second time penalty.

It meant Aegerter would claim a third consecutive WorldSSP victory ahead of Sammarinese Bernardi in second for the third consecutive race with Cluzel taking third spot on the podium. Gonzalez had been in position to take advantage of Odendaal’s penalty, but an error meant he fell down to fifth place before being classified in fourth, ahead of Odendaal.

Oettl came home in sixth place after a strong showing from the German rider in Race 2, coming home a quarter-of-a-second ahead of Italian rider Raffaele De Rosa (Orelac Racing VerdNatura) who secured a top seven finish. Despite strong pace in the restarted race, Alcoba fell down the order to finish in eighth, just ahead of Federico Caricasulo (GMT94 Yamaha) and Hannes Soomer (Kallio Racing).

There was a Lap 1 collision during the original start at Turn featuring Filippo Fuligni (D34G Racing), Roberto Mercandelli (Team Rosso e Nero) and Niki Tuuli (MV Agusta Corse Clienti) with all three riders forced to retire on the opening lap of the original race; Tuuli taken to the medical centre for a check-up following the crash. Kevin Manfredi (Altogo Racing Team) and Stephane Frossard (Moto Team Jura Vitesse) also retired after incidents during the first stage of the race; Manfredi retiring with technical problems.

P1 Dominique Aegerter (Ten Kate Racing Yamaha)
“Yeah thank you very much. A perfect weekend. We were strong since the beginning, to take the pole position, fastest lap, two victories… The team did a great job. I’m very very happy. Nice to see fans around the track, I have a good support from Switzerland and also from Italy. In the end I was a little bit lucky that Steven got a penalty. I didn’t know this so I was pushing until the last lap. I found out when I was cruising back to the pit lane that I was first, so I was even happier. And yeah, it’s strange to win yesterday and not celebrate. But tonight for sure we will celebrate with some espresso.

P3 Jules Cluzel (GMT94 Yamaha)
“Yeah better than yesterday, one step more. For sure, I had a little bit of luck for once, that someone gets a penalty but at the end last race was difficult. It was difficult this weekend but I was strong. This morningI worked so hard in warm up. We improved the bike for the race, I’m happy actually because we improved the bike, so we can be positive. We still miss a little bit of acceleration to be honest but the team knows and we have 5 weeks to work on it! ”