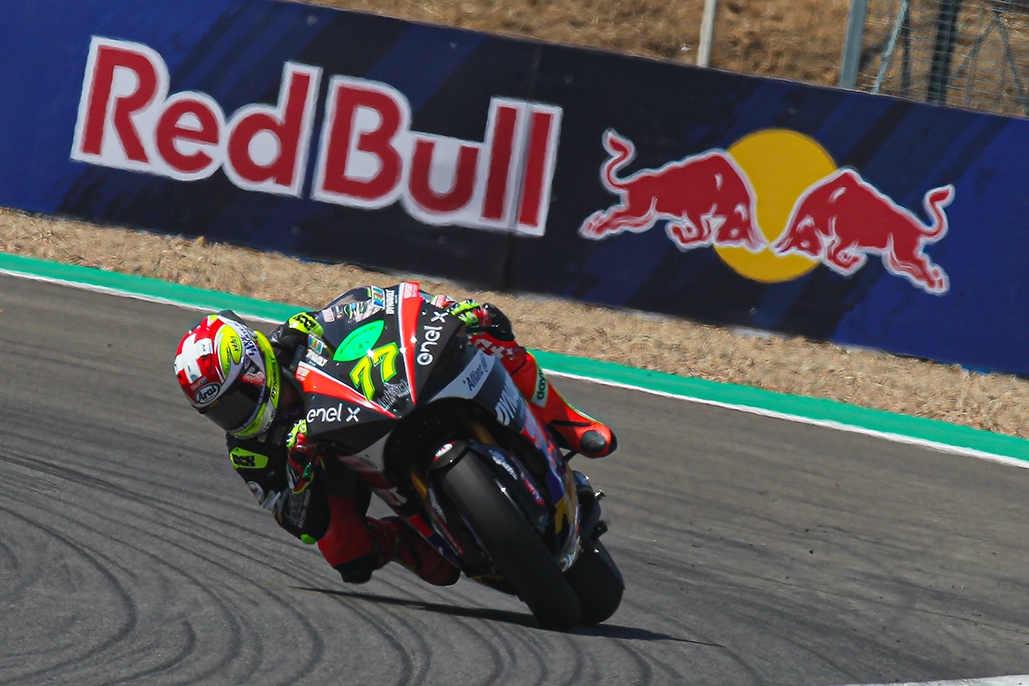 The rookie heads the FIM Enel MotoE™ World Cup grid, ahead of Ferrari and another impressive lap from Tulovic.

Dominique Aegerter (Dynavolt Intact GP) converted his Free Practice form into his maiden FIM Enel MotoE™ World Cup E-Pole in Round 2, with the Swiss rider back on top for the first time since taking pole for the 2014 German Moto2™ Grand Prix. He beat second fastest Matteo Ferrari (Trentino Gresini MotoE) by 0.267. and two rookies will line-up on the front row once again as Lukas Tulovic (Tech3 E-Racing) set a 1:48.525 and mastered the final sector to sit third.

Track temperatures for the MotoE™ riders sat at a sizzling 60+ degrees on Saturday afternoon as Cup standings leader Eric Granado (Avintia Esponsorama Racing) went in search of his second pole in seven days. After Jakub Kornfeil (WithU Motorsport), Maria Herrera (Openbank Aspar Team) – the Spaniard having her lap time cancelled for exceeding track limits – and Alessandro Zaccone (Trentino Gresini MotoE) had completed their laps, Josh Hook (Octo Pramac MotoE) fired in a low 1:49 so set the other riders which a good benchmark time to beat.

Next thought it was a disaster for Tommaso Marcon (Tech3 E-Racing) as the Italian left pitlane too late, seeing the rookie getting a black flag in his second E-Pole session. There were no such errors for Tulovic though as the German slammed in a stunning lap time, his aforementioned 1:48.525 a tenth faster than Granado’s E-Pole time at the Spanish GP – and that time was going to take some beating.

Jordi Torres (Pons Racing 40) and Alejandro Medina (Openbank Aspar Team) slotted in behind Tulovic’s time despite their best effort, but Ferrari was able to knock the German off his perch to nick provisional pole by a tenth. Then came Granado, with all eyes on the Brazilian. Could the runaway Spanish GP winner put another chink in his opponents’ armour by taking pole? The number 51 had two moments on his flying lap – most notably the back getting squirmy out of Turn 6 – and that would ultimately cost him pole position as he slotted into P3, with Aegerter still to go

Could he take the pressure? More than. The former Moto2™ winner made no mistakes on his run to grab pole position by over two tenths, demoting Ferrari to second and Granado off the front row. Torres and Medina will start 5th and 6th on the second row, with the experienced Alex de Angelis (Octo Pramac MotoE) heading row three. Mattia Casadei (SIC58 Squadra Corse), Niccolo Canepa (LCR E-Team) and Hook complete the top 10

Tune into the second MotoE™ race of 2020 when the electric class kick off race proceedings at 10:05 local time (GMT+2).

Dominique Aegerter: “For me I’m very happy to start as poleman, we did a great job, we worked very hard this week, we were checking the data from last weekend, the team was working very hard to improve, and me to get more used to the bike! They did a greatjob, it was very hot working in the E-paddock! And as a rider on the track it’s very hot as well. The E-pole is very special, you cannot risk too much and you need to pay attention to track limits, so you need to push and we made a perfect lap. This will be a good chance for me tomorrow to start better than last weekend. I’m looking forward to it.”