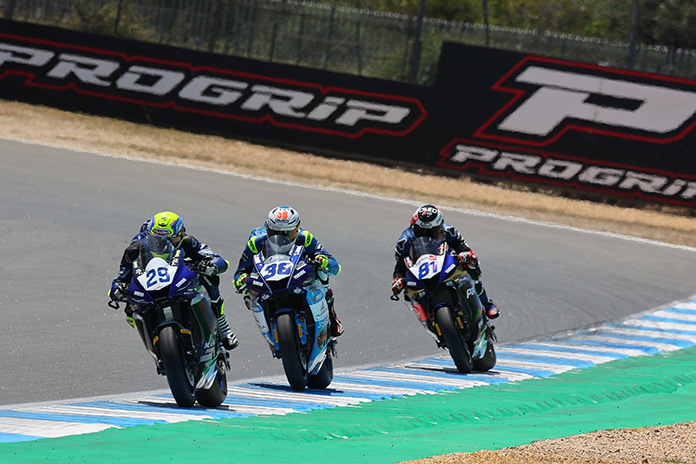 The Swiss rider battled from fifth on the grid to take his first WorldSSP victory in emotional circumstances.

The FIM Supersport World Championship season continued with a thrilling battle for the win at the Circuito Estoril throughout Race 2 for the Gaerne Estoril Round as Dominique Aegerter (Ten Kate Racing Yamaha) claimed an emotional victory in Portugal, his first in the class after fighting from fifth on the grid and a poor start to claim victory and dedicated his win in Parc Ferme to Jason Dupasquier.

Oettl was able to go straight to the front of the WorldSSP field at the start of the 18-lap race as he immediately got the jump on polesitter Federico Caricasulo (GMT94 Yamaha) from second on the grid and immediately looked to build a gap at the front of the field as the German rider was still searching for his maiden WorldSSP victory.

As the race approached the halfway mark, the lead group had become Oettl, Odendaal, De Rosa and Aegerter with less than half-a-second separating the quartet throughout most of the second half of the race although De Rosa made his move on Lap 12, passing Oettl and Odendaal at Turn 1 while Aegerter looked to make a move on Odendaal at the same time at the same corner.

No rider was able to pull out a gap at the front with a four-way battle in full swing throughout the 18-lap race, with all four riders looking to make their move. Aegerter made his made on De Rosa on Lap 14 and looked to make his move on Oettl to move into the lead of the race before making his move on Oettl at the start of Lap 15 at Turn 1, out-braking the German rider into the right-hander to take the lead of the race.

De Rosa had re-passed Aegerter to take the lead of the race but came off his Kawasaki at Turn 9 just a few corners later, allowing Swiss rider Aegerter to re-take the lead of the race yet again. This time he was able to hold on with Luca Bernardi (CM Racing) in second place, after Cluzel went off the track at Turn 1 while Odendaal had a technical issue on the final lap of the race; Bernardi taking San Marino’s first podium in WorldSSP and becoming fourth youngest rider to stand on the WorldSSP podium.

Oettl came home in third place after the late-race drama after leading for most of the race with Manuel Gonzalez (Yamaha ParkinGo Team) finishing in fourth, his best result in WorldSSP as he starts his second campaign with strong pace. Estonian Hannes Soomer (Kallio Racing) finished in fifth place with Caricasulo completing the top six.

There were four retirements from the race with Odendaal pulling into the pit lane on the final lap following his technical issue, while De Rosa also retired after he crashed out from the lead. Michel Fabrizio (G.A.P. MOTOZOO Racing by Puccetti) and Leonardo Taccini (Orelac Racing VerdNatura) also retired; Taccini coming off his bike at Turn 3.

“First of all, it was very sad to hear before the start that one friend and rider from Switzerland, passed away. My condolences to his family, team and all the people around him. I will remember Jason, so I will dedicate my win, my first Supersport win, to him. But our life is motorsport, I pushed very hard for him, my team. Ten Kate Racing Yamaha did a great job. Happy that the race could finish in my way, that no one could overtake me on the finish line.”

“I’m very happy with this position. It is my first podium in World Supersport. I’m working very hard with my team, step-by-step, I’m very happy.”

“It was a tough race. Towards the end I realised that I had to finish this race, of course always as high as possible, but I saw a lot of mistakes from other riders. I tried to pull away at the front at the beginning of the race which destroyed my tyres a little bit. Towards the end, there was not much left but now at least I know if you push too much at the beginning, you will suffer from mid-race. The team did an amazing job all weekend long, the bike is really good. Two podiums in one weekend, that’s really quite good.”

Championship Standings (after Race 2, Round 2)