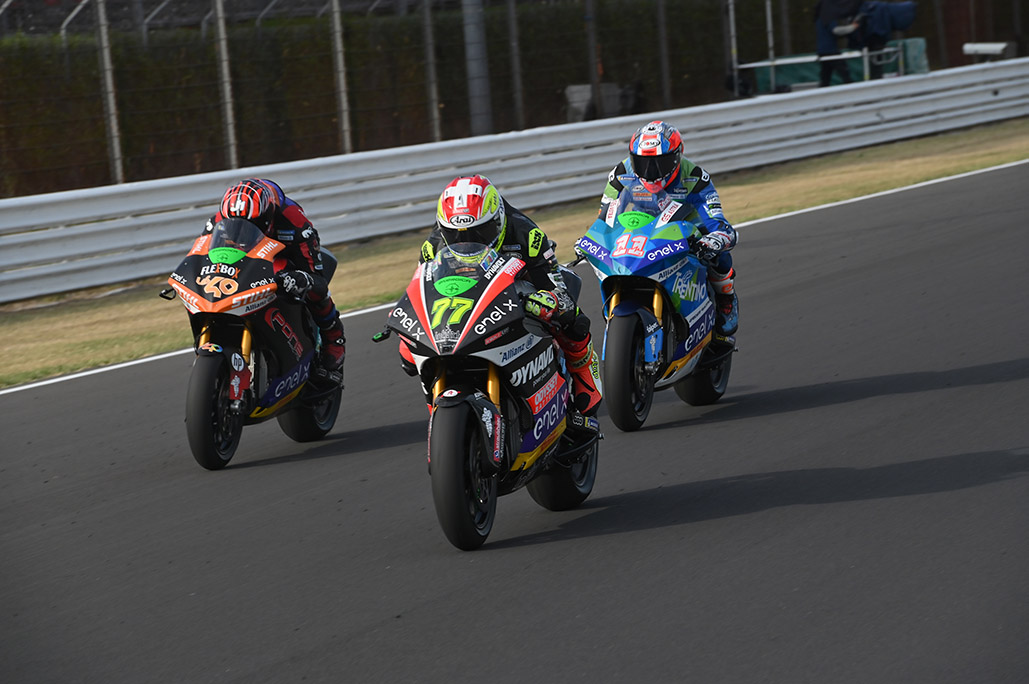 The Swiss rider comes out on top to extend his lead, ending Ferrari’s unbeaten streak on the Riviera di Rimini.

It was Ferrari who got the holeshot into Turn 1 from second on the grid, with polesitter Torres slotting into P2. There was drama from the off though as Lukas Tulovic (Tech3 E-Racing) suffered a huge highside at Turn 2 in the middle of the pack, thankfully the riders avoided contact with Tulovic and the German rider headed to the medical centre for a check-up. Tech3 later confirmed Tulovic had suffered a broken third metacarpal bone in his right hand and he has some pain in his right ankle, but the doctors will decide tomorrow morning whether he is fit to ride in Race 2, which he wants to do.

After the shuffle at the start then, Ferrari was out front as a lead group of six formed by the end of Lap 1, with Aegerter grabbing second off Torres on Lap 2. Lap 3 then witnessed more drama – and it was big for both the race and standings. Free Practice pacesetter Eric Granado (Avintia Esponsorama Racing), having made his way past Mattia Casadei (Ongetta SIC58 Squadracorse) shortly before, went for an inside move on Xavier Simeon (LCR E-Team) at the tight Turn 4 right-hander. It looked like Granado had made the move stick but then the front of his Energica Ego Corsa suddenly washed away, with Simeon the unlucky party caught in the crossfire. Both riders were down and out of the race – thankfully ok – but that’s a disaster for their title hopes. It also means the duo will be starting from the back of the grid for Race 2 tomorrow…

That incident left a lead group of three riders up front, with Casadei 0.8 seconds adrift of Ferrari, Torres and Aegerter – the top quartet also the top four in the World Cup standings, making it a vital race. With three laps to go, Aegerter made his move on Torres at Turn 14 but the Spaniard was able to get the cutback – giving Ferrari a little bit of breathing space…

That was soon diminished though and at the start of the last lap, Aegerter again showed a wheel to Torres – and made a Turn 1 pass stick. Now, the top two in the standings were the top two in the race. Heading down the back straight into Turn 11, Ferrari remained ahead but you could tell what was coming: Aegerter was tucked into the slipstream of his rival and heading into Turn 14, the Swiss rider slammed up the inside of Ferrari and into the lead. Could the Italian hit back? Not quite, as Aegerter led through the final sector and held it into the final corner to claim a crucial Race 1 victory and his second win of the season.

In an attempt to beat Aegerter on the run to the line, Ferrari then exceeded track limits at Turn 16. Having crossed the line ahead of Torres, he was demoted one position and loses that chunk of points to boot, now back behind Torres overall. Nevertheless, the top three across the line were covered by just 0.103 seconds in whichever order!

Casadei took the chequered flag 2.5 seconds from victory to earn his fourth consecutive top five finish of 2020, with Tommaso Marcon (Tech3 E-Racing) completing the top five. Niccolo Canepa (LCR E-Team) finished P6, just over half a second ahead of a great gaggle of riders who battled it out for the remaining top 10 positions. Alejandro Medina (Openbank Aspar Team), Josh Hook (Octo Pramac MotoE), Xavi Cardelus (Avintia Esponsorama Racing) and Alessandro Zaccone (Trentino Gresini MotoE) crossed the line covered by just half a second to round out the top 10.

That’s it for Saturday. Aegerter extended his lead in the standings to 19 points over Torres, with Ferrari two adrift of the Spaniard in P3. In addition, the podium finishers secure front row starts for Race 2 on Sunday as Race 1 results now set the second grid. That’s bad news for Granado, Simeon, Di Meglio, de Angelis and more, but it should create another stunning showdown. Tune in at 10:05 (GMT+2)!