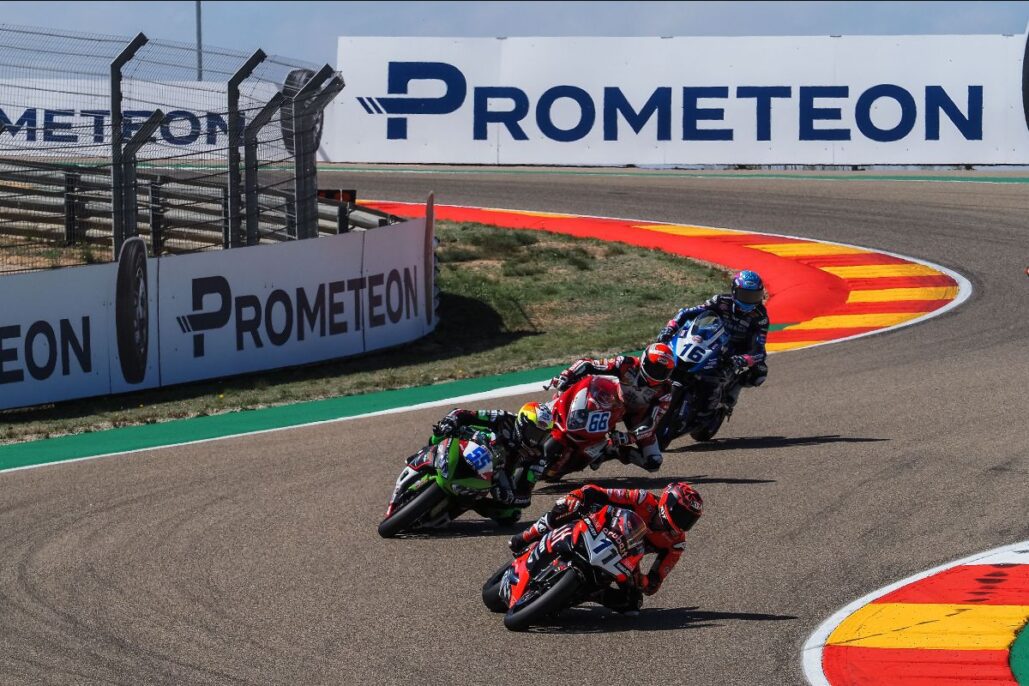 Aegerter wins over Baldassarri by just 0.030s, Ducati back on the podium with Bulega.

Dominique Aegerter (Ten Kate Racing Yamaha) claimed his first victory of the 2022 FIM Supersport World Championship. After a tough battle with Baldassarri, Aegerter took the win over the Italian and heads to Assen as the Championship leader. He said: “Today I tried to push from the beginning to create a small gap with other riders. Baldassarri was always behind me so I just tried to focus and not make any mistakes. He overtook me on the straight in the last lap, but I thought “not again” so I tried to push really in the last corner and I could overtake him in the inside. 25 points, we’re leading the Championship so it’s very nice. Ten Kate brought a very good package for this start of season.”

Lorenzo Baldassarri (Evan Bros. WorldSSP Yamaha Team) was denied a debut double, finishing in second place just 0.030s behind Aegerter. The Italian rookie said: “I was feeling more confident than yesterday. It was again a great battle with Dominique. He did a good job to overtake me in the inside, at the exit of the corner I tried to push. But I pushed too much and I was sliding so I missed the win by 0.030s.”

Nicolo Bulega (Aruba.it Racing WorldSSP Team) capitalised on Can Oncu’s (Kawasaki Puccetti Racing) retirement due to a technical issue in the last lap to claim third position, scoring Ducati’s first WorldSSP podium since 2007 and his first one in the category. He said: “It was difficult, but we did a great job with a new bike. I’m happy. We take this podium, don’t stop working because we still have things to improve. Let’s see what we can do next race.”

Glenn van Straalen (EAB Racing Team) crossed the finish line in fourth, having been overtaken by Bulega in the final part of the race. Niki Tuuli (MV Agusta Reparto Corse) took fifth position for MV Agusta, Jules Cluzel (GMT94 Yamaha) completed the top six. Yari Montella (Kawasaki Puccetti Racing) claimed seventh place in a strong result for the rookie after running as high in fourth in the early stages of the race. Starting from the back of the grid, Stefano Manzi (Dynavolt Triumph) managed to recover to finish in eighth place.

Aegerter and Baldassarri leaves MotorLand Aragon tied on points, having scored 25 points each this weekend. Bulega stands third in the Championship standings with 27 points.