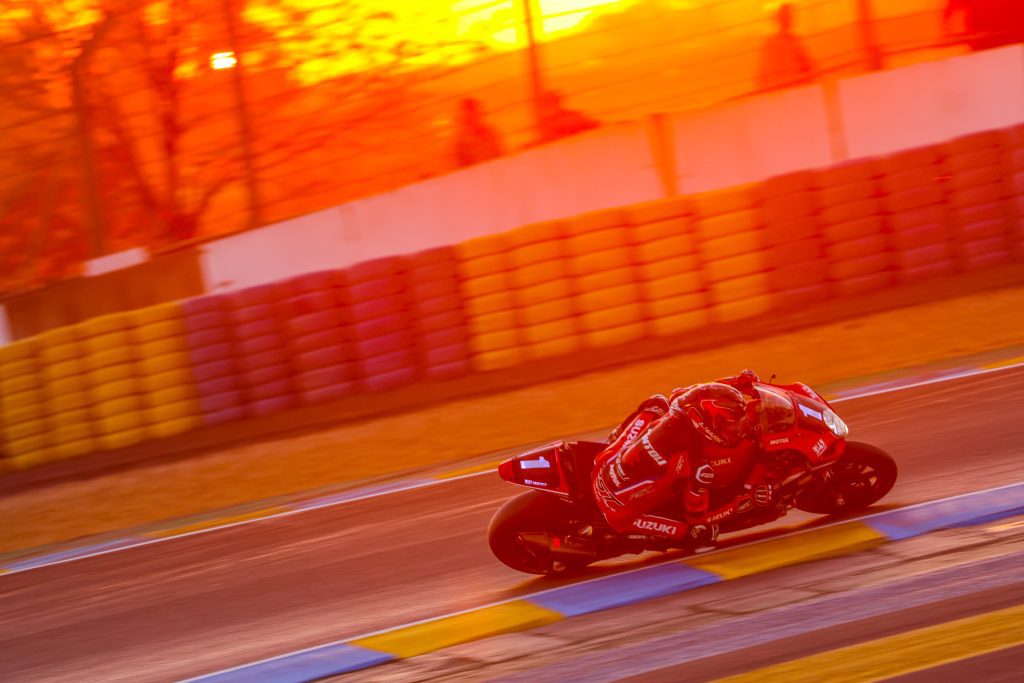 Yoshimura SERT Motul is on top heading into the final eight hours of the 24 Heures Motos, round one of the 2022 FIM Endurance World Championship.

F.C.C. TSR Honda France was in front after eight hours, but the squad’s challenge soon unravelled with costly pitstops required to fix firstly a gear selector issue and then to replace a broken silencer. A ride-through penalty caused further delay.

But it’s been an eight-hour stretch clear of significant issue for Yoshimura SERT Motul, which won the 24 Heures Motos last year as part of its FIM Endurance World Championship title triumph and claimed the 10 points handed out to the team in the lead after 16 hours. The Le Mans-based organisation could have been further ahead had it not lost vital moments when it ran dry of fuel on Saturday evening.

YART – Yamaha Official Team EWC is second and on the same lap as Yoshimura SERT Motul, a feat it achieved shortly before successive safety car periods just after sunrise.

F.C.C. TSR Honda France is third but Webike SRC Kawasaki France’s hopes of a podium were wrecked when it was forced to stop for more than one hour following a mechanical issue.

ERC Endurance Ducati’s fightback following a crash avoiding a backmarker in the seventh hour continues with the squad up to P13 behind Pitlane Endurance and Team LH Racing. Tati Team Beringer Racing is out contention for a top 10 finish after a series of delays during the night.

Fans are back in the grandstands after two years of COVID-19 restrictions and witnessed a dramatic start to the race at 15h00 CET on Sunday when Christophe Seigneur was unable to avoid colliding with a slow-moving Bradley Smith, while pole-sitter Karel Hanika was delayed when he couldn’t get his YART – Yamaha Official Team EWC entry to fire up.

Seigneur was able to walk back to the pits, but ex-MotoGP rider Smith was taken to hospital for medical checks as a result of the substantial rear impact, having received immediate medical attention at the side of the track when the field circulated under safety car conditions. Smith suffered no serious injuries but will remain in hospital for a period of observation.