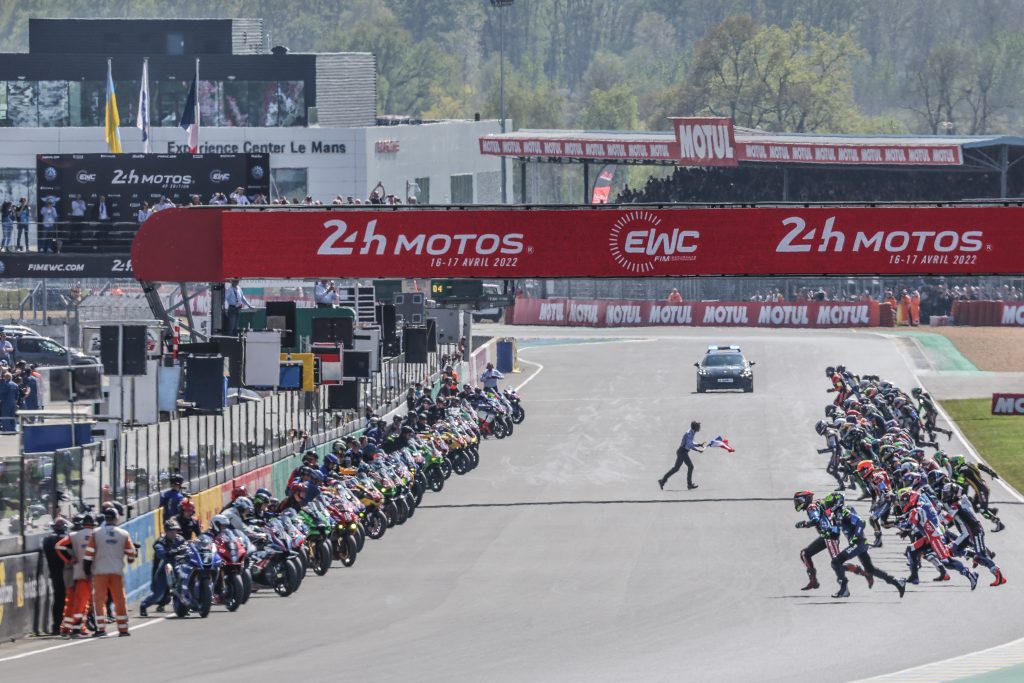 F.C.C. TSR Honda France leads the 24 Heures Motos after eight hours of high-speed action in the opening round of the FIM Endurance World Championship at Le Mans – scoring 10 bonus points in the process.

With fans back in the grandstands after two years of COVID-19 restrictions, the race began in dramatic fashion when Christophe Seigneur was unable to avoid colliding with a slow-moving Bradley Smith, while pole-sitter Karel Hanika was delayed when he couldn’t get his YART – Yamaha Official Team EWC entry to fire up.

Seigneur was able to walk back to the pits, but ex-MotoGP rider Smith was taken to hospital for medical checks as a result of the substantial rear impact, having received immediate medical attention at the side of the track when the field circulated under safety car conditions. Smith suffered no serious injuries but will remain in hospital for a period of observation.

Racing eventually resumed after 21 minutes and Honda rider Mike Di Meglio wasted no time demoting Gregg Black (Yoshimura SERT Motul) for the lead on the entry to the first chicane. But Black didn’t allow Di Meglio to pull clear and was back in the lead after 35 minutes before making his first scheduled stop after the opening hour, handing over to Xavier Siméon.

Siméon took his turn to lead when Di Meglio pitted at 16h05, but the Belgian world champion wasn’t able to fend off Gino Rea, Di Meglio’s replacement, who led until he lost precious seconds passing a backmarker, although the Briton was soon in front again.

Despite reporting a lack of grip, third F.C.C. TSR Honda France rider Josh Hook impressed during his stint and handed over to Di Meglio shortly before a second safety car period, which resulted from the #77 Wójcik Racing Team Yamaha dropping fluid on the track. The timing of the deployment of the two safety cars worked in Di Meglio’s favour and he was able to open a near-one minute lead on his rivals.

But there was a scare for Rea during his second stint when he got unsettled on fluid dropped by the Team 18 Sapeurs Pompiers CMS Motostore Yamaha, although he was able to avoid going off and quickly regained his composure.

A longer pit stop to replace the Honda’s brake calipers, coupled with Rea’s limited running at night has enabled Yoshimura SERT Motul to cut what was a near one-minute lead for F.C.C. TSR Honda France after six hours to 33.162s. That’s despite the Le Mans-based team losing out in the earlier safety car shuffle with Sylvain Guintoli running out of fuel as he neared the finish of his stint. Forced to push his Suzuki into the pitlane, Guintoli was powerless to avoid the resulting time loss.

YART – Yamaha Official Team EWC, whose riders Karel Hanika, Niccolò Canepa and Marvin Fritz have been fighting back to recover the time lost at the start, is third with eight hours run followed by Webike SRC Kawasaki France and Viltaïs Racing Igol.

ERC Endurance Ducati was fifth after six hours but dropped out of contention shortly afterwards when Xavi Forès crashed before returning. There was even bigger disappointment for BMW Motorrad World Endurance Team when a stone holed the radiator and forced it out of the podium places. Tati Team Beringer Racing lost time when its Kawasaki ran out of fuel, leading to Alan Techer pushing his bike back to the pits.

Team Bolliger Switzerland is eighth but despite returning to the race after extensive repairs Team MOTO AIN withdrew the #96 bike.