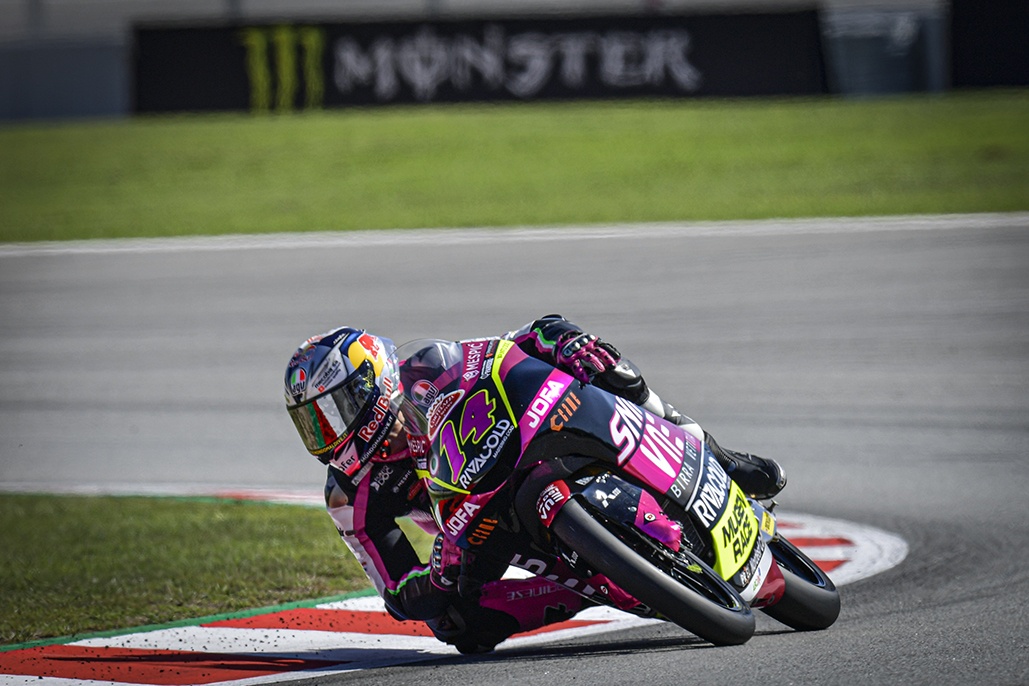 The Italian bounced back from a huge highside on Friday to set a new lap record, with Fernandez and Rodrigo completing the front row… on identical lap times!

In Q1 there was already plenty to talk about as Ai Ogura (Honda Team Asia) stole the headlines for all the wrong reasons. Incredibly, Championship leader Albert Arenas (Gaviota Aspar Team Moto3), closest challenger Ogura and third overall John McPhee (Petronas Sprinta Racing) all found themselves in the session, and it was mission accomplished for Arenas and McPhee as they moved through behind Niccolo Antonelli (SIC58 Squadra Corse) and Q1’s fastest man Alonso Lopez (Sterilgarda Max Racing Team). But Ogura? The Japanese rider suffered his worst qualifying of the season by a whopping nine places, so he’ll be facing a serious mountain on Sunday from P24 on the grid.

Once Q2 was underway, Fernandez set the first benchmark of the session with a 1:48.611 to lead Darryn Binder (CIP – Green Power) and Kaito Toba (Red Bull KTM Ajo) in the early stages, but Arenas was next on the attack and into provisional P2 on his first flying lap. Arbolino then went top by just 0.045, moving the goalposts ahead of a frantic final couple of laps for the field.

On his second run, Fernandez reclaimed provisional pole by 0.186, but the standings were soon to get a shake up. Seven riders were lighting up the timing screens as the 18-rider field chased pole, but the fastest of them all was Arbolino. Over three tenths under Fernandez’ lap time halfway around the lap, the Italian was nearly four tenths under by the third split. Making no mistakes through the final sector and keeping it together across the line, Arbolino’s time was astonishing. Pole secured, lap record obliterated and over six tenths clear.

There was last minute drama for Fernandez too as the Spaniard tumbled out at the final corner, but rider ok and ready to line up second. Rodrigo takes the outside of the front row after setting his best time late on, and although it’s identical to Fernandez’ best, the Argentine’s second fastest time was slower so he takes P3.

Arenas will be stoked to be heading Row 2 in fourth, the highest-placed of the current title-challenging trio. Jaume Masia (Leopard Racing) played the risky strategy of not setting a lap time until the final minute, but it paid off as the Spaniard claimed P5 in Q2. Niccolo Antonelli (SIC58 Squadra Corse) completes the second row in sixth, the Italian 0.8 shy of Arbolino’s pace but only just over two tenths away from P2.

Filip Salač (Rivacold Snipers Team) spearheads the third row in seventh as the Czech rider took his best Saturday afternoon result of the season, joined by Toba and Binder on Row 3. The Japanese rider improved on his final flying lap to get the better of the South African, who was unable to beat his second lap set early on.

Sergio Garcia (Estrella Galicia 0,0) rounds out the top 10 in Moto3™ Q2, joined on Row 4 by Andrea Migno (Sky Racing Team VR46) and McPhee. That’s now three races in a row that McPhee has failed to qualify inside the top 10, although he did still win one of them… and Sunday is very much another day.

The Moto3™ title fight looks set to take another twist on Sunday afternoon in Barcelona. It will no doubt be a thrilling watch as the lightweight class prepare for battle once more in 2020 – so tune in but at the later time of 12:00 local time (GMT+2)!

Tony Arbolino: “It was an incredible lap, I think from the first run I saw I was first and went in the box and saw the data. It wasn’t a perfect lap, I said ‘ok, we can do better’ but I didn’t expect to do that lap. We put the bike the same as last year and we’re faster in QP and a bit more difficult in the race, but it was an incredible lap with 0.6 to second and we did an incredible job. We didn’t stop working every day so I think we deserve it! But tomorrow we need to get a lot of points because we’re not so close to first in the Championship so we have a lot of work to do tomorrow!”