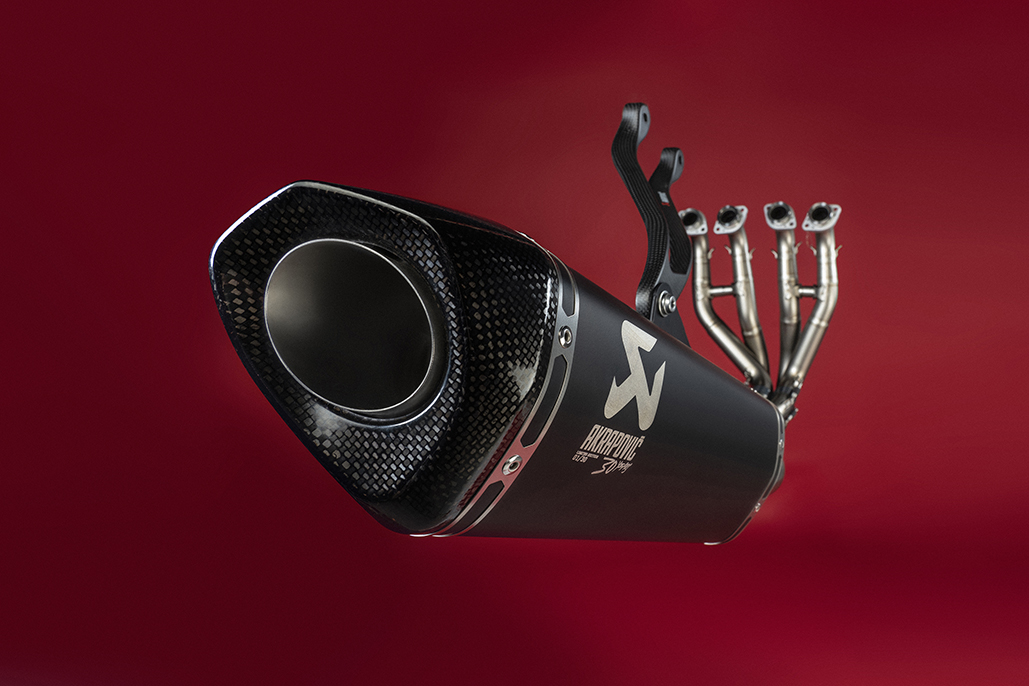 Akrapovič is celebrating its 30th anniversary this year, and to mark this momentous occasion the Slovenian exhaust specialists are releasing a very limited edition, which will only be available in 30 individually numbered pieces.

The Evolution Line (Titanium) 30th Anniversary* exhaust system for the Kawasaki Ninja ZX-10R and Ninja ZX-10RR will be a one-off special as part of the Akrapovič celebrations. This unique product will be prepared with an engraved Akrapovič logo and number in a series of 30. To add to its special character, each exhaust will come with a special certificate to verify its exclusivity and rarity.

Akrapovič has a racing DNA that has run through the company since the early days, when Igor Akrapovič was racing and tuning his bikes in his garage to achieve better performance. In 1991, from a small workshop where he began specialising in developing and producing exhaust systems for racing and sport bikes, he sowed the seeds of the Akrapovič company, which is now a worldwide name in both racing and retail. Akira Yanagawa of the Kawasaki factory team won Akrapovič’s first world championship race, when he took victory in a WorldSBK event in 1997, and Jonathan Rea of the Kawasaki Racing Team celebrated a record six-in-a-row world championship title in 2020 – all achieved using Akrapovič exhausts. It is these connections that have led to Akrapovič creating this limited-edition exhaust for the Kawasaki Ninja ZX-10R and Ninja ZX-10RR.

To mark such a special occasion, the limited-edition exhaust for the Kawasaki Ninja ZX-10R and Ninja ZX-10RR is a very distinctive product. The Evolution Line (Titanium) 30th Anniversary exhaust system is fully constructed from lightweight high-grade titanium, with a titanium muffler outer sleeve, link pipe, and headers. The outer sleeve will be black with a special golden front rosette, as seen on the specially prepared Akrapovič exhaust on Rea’s bike after winning his sixth consecutive title. The tubes will be 0.9 mm thick, as used by the Kawasaki Racing Team on its WorldSBK bikes, and the system will also include CNC-machined special treated bushes, again as used in WorldSBK. The headers will be coated for increased durability, and the whole system will be finished with unique engraving and a handcrafted carbon-fibre end-cap.

The visual impact of the Evolution Line (Titanium) 30th Anniversary exhaust system is a very important factor for such a significant product, but this is an exhaust that is as much about performance as style, and it certainly delivers on both counts. Weighing in at 6.6 kg (56.4%) lighter than standard stock, the overall exhaust is a very close relative of the system that the Kawasaki Racing Team is using in WorldSBK, and the deep, pure racing sound that this limited-edition Evolution Line (Titanium) 30th Anniversary emits certainly enhances the system’s sporty heritage. Power and torque levels are increased through the addition of the exhaust, with gains of 8.2 kW (11.1 hp) at 8,550 rpm and 13.4 Nm at 3,600 rpm in back-to-back tests on the Akrapovič in-house dyno with the standard stock exhaust system for comparison. Due to the sporty and racing nature of the system, remapping is mandatory because it is intended for closed-course competition use only. For tracks with a noise limit, a noise insert is supplied to allow owners to ride at the majority of venues.

The 30-year limited edition Evolution Line (Titanium) 30th Anniversary exhaust system for the Kawasaki Ninja ZX-10R and Ninja ZX-10RR is a special product, totally fitting the occasion. Its looks, performance, and sound are at the forefront of motorcycle exhaust technology, and whether it is used for its intended purpose, or simply displayed on a wall, it is certainly a collector’s piece worth talking about.

For added insight, visit our special website dedicated to the Evolution Line (Titanium) 30th Anniversary exhaust system with a specially prepared video of this exhaust.
* THIS PRODUCT DOES NOT MEET EMISSION COMPLIANCE REQUIREMENTS FOR STREET OR HIGHWAY USE

For more information on head to the Akrapovič official website www.akrapovic.com