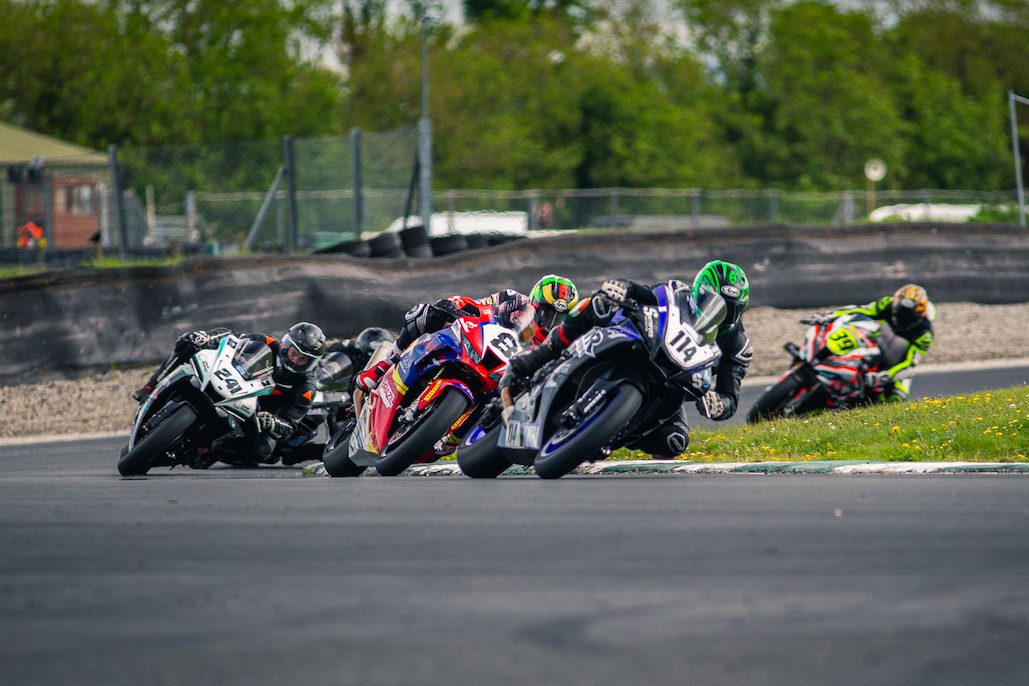 The Mondello Park International Track was the venue for the second event of the 2022 Dunlop Masters Superbike Championship as both the Superbike and Supersport Series finished the weekend with new winners and first time Championship leaders.

Cavan’s Alan Kenny and County Down teenager A Jay Carey both moved to the top of their respective classes, with Kenny taking his maiden Superbike victories, while Carey took two wins in the Supersport Cup class on his way to a pair of overall podium finishes.

A rain shower just before the start of Superbike race one meant that the riders started on dry weather tyres on a damp track. Kenny, on the outside of the front row and off the racing line, had to deal with the wettest part of the track and dropped back to fourth by Maxus corner. The Cavan rider was quickly on the move however as he passed Richie Ryan on lap one before getting by Thomas and then Emmet O’Grady to take a popular maiden Superbike win. Emmet came home second with Thomas third, while the Cup win went to Liam Kane on his return to racing after almost a decade away.

Kenny lead away from the lights in Race two from Thomas O’Grady, but Kilkenny’s Richie Ryan moved his way into the lead by half distance. Kenny fought back, bringing both of the O’Gradys with him as the top four crossed the finish line less than a second apart. Ryan took the win from Kenny and Thomas O’Grady, as behind the lead group Andrew Whearty took the Cup win from Jamie Collins.

The third race was again damp and Kenny mastered the conditions to move into the lead just before the race was stopped as the rain got heavier. Emmet O’Grady crashed out and Ryan did not start, leaving Jamie Collins to take the last podium spot and the Cup class victory. Kenny now leads the championship from Ryan and the two O’Grady’s.

As in the Superbike class Emmet O’Grady took pole position on his brand new Harris Group Yamaha R6 as one of the biggest Supersport grids for years lined up. The Kerryman then rode a steady race in the tricky damp conditions as behind him English rider Chris Burns battled his way from sixth to second, ahead of Ulster teenager Scott McCrory and Cavan man Shane Connolly. Burns team mate A Jay Carey took the Cup spoils in fifth place beating Dean Lacey and Jack O’Grady.

Race two again saw O’Grady on pole ahead of Burns, McCrory and the impressive Jonny Campbell. O’Grady led all the way but behind him Cup rider Carey kept a trio of pro riders at bay as he took second overall. The third place battle went right to the flag with Connolly nipping past Campbell on the final corner to take the place. In the Cup Dean Lacey again came home second behind Carey, with Jack O’Grady third.

In race three O’Grady was once again at the front but at the end of lap two his quest for a hat-trick came to an end as a collision between himself and Connolly put both riders out. Campbell emerged to take his first Masters win ahead of the Cup top three, Jack O’Grady, Carey and Gary Scott. Carey’s result were good enough for him to become the first rider to simultaneously lead both the overall championship and the Cup class.

The Principal Insurance Twins class produced the closest finish of the day in race three as the Production Twin top two required the help of the photo finish camera to separate them. Championship leader Nathan McGauran almost took the win at the line but was beaten by millimetres by Brandon Kavanagh. The Production class had three different winners as Tom Greenwood took race one and Gareth Morrell race two. In Supertwins the dominance of the new Aprilia 660 continued as Thomas O’Grady took races one and three with Darragh Crean winning the second one.