Albert Arenas (Gaviota Aspar Team Moto3) is the 2020 FIM Moto3™ World Champion. The Spaniard, who started the year with a win in Qatar, sealed the deal in the final race of the season with a 12th place, taking his first World Championship by four points after three wins and two further podiums.

Arenas hit the ground running in the CEV 125 Championship, as it was then, with the Spaniard’s first season in 2011 seeing him score some solid points. The next year it changed to Moto3™ and he took his first podium and pole position, and the season after that his first win in the series. The end of 2014 saw Arenas make his Grand Prix debut in the final round in Valencia, before 2015 proved one of his most pivotal seasons on his journey to becoming a World Champion.

The first year it became the FIM Moto3™ Junior World Championship, Arenas gained traction from top fives early on to take podiums and then go on a winning spree to close out the season, ending 2015 in second overall after an impressive run. He then made some appearances as an injury replacement in the 2016 Moto3™ World Championship earlier in the year with Mahindra, before becoming a permanent fixture from Austria on.

His first full Moto3™ season in 2017 was a tougher one but Arenas scored points and took a top 10 in Misano before it all started to come together for 2018. After a tougher start, glory was just around the corner as the Spaniard took his first Grand Prix victory in a stunning French Grand Prix at Le Mans. He won again before the end of the year as he stood on the top step Down Under, having become a bona fide contender at the front.

2019 was more consistent. A victory came his way in Thailand that began a run of three consecutive podiums in Japan and Australia, with Arenas eventually ending the year 11th in the Championship on 108 points after one win, one second place and one third. Then came 2020.

Arenas’ season began with a phenomenal victory in Qatar before COVID-19 put a halt to proceedings, and he would have to wait until July to reignite his title charge. But on home soil in Jerez, the number 75 proved he was the real deal with a second win in two to extend his lead at the top.

A DNF in the Andalucia GP was quickly put to the back of his mind with two more podiums in the Czech Republic and Austria, the latter a third win of the campaign, and Arenas seemed the secure favourite for the title. However, he wouldn’t return to the rostrum until the French GP, five races after Austria, as he was hit by DNFs and bad luck. But Le Mans saw him back on the box after another impressive ride, and although that would turn out to be his last podium of the season, the points would prove crucial.

A tough European GP saw Arenas DNF and get DSQ’d, but he arrived in Portugal as the Championship leader with just two rivals remaining for the crown. In an outstanding final battle of 2020, a hard-fought 12th place under intense pressure was enough for the Spaniard to crown himself the 2020 Moto3™ World Champion.

Congratulations to Arenas and his Gaviota Aspar Team! 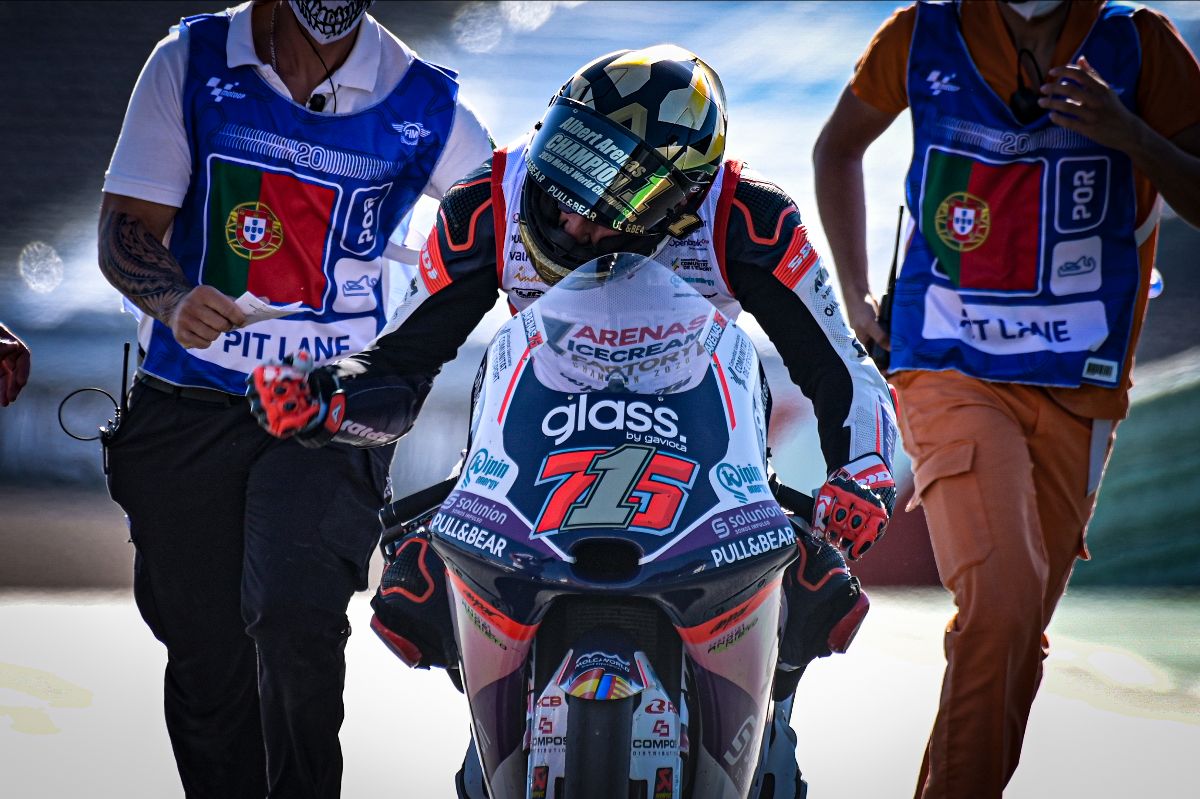 Albert Arenas: “I’m still enjoying the moment, I don’t really believe it yet what happened today! I knew it was a matter of time, races, we were close in the last races but there were many things we couldn’t control. What was in my hands I was trying to have under control, enjoy riding. But today we made it and it’s incredible.

“I started the race with a lot of energy, I wanted to push and do a great result and enjoy the race. Until half race distance I was really comfortable then I started to have some problems, I don’t know, nerves, the rear tyre… but it was ok. There was a moment I was suffering more then I got the pace again. The last lap was out of control, I was catching Arbolino and then it was a typical Moto3 moment with a lot of touches, everyone didn’t have anything to lose and overtook everywhere, but I was there. I was pushing and when I crossed the line it was a relief. We made it, but until I saw my team I didn’t believe it! It’s incredible.”