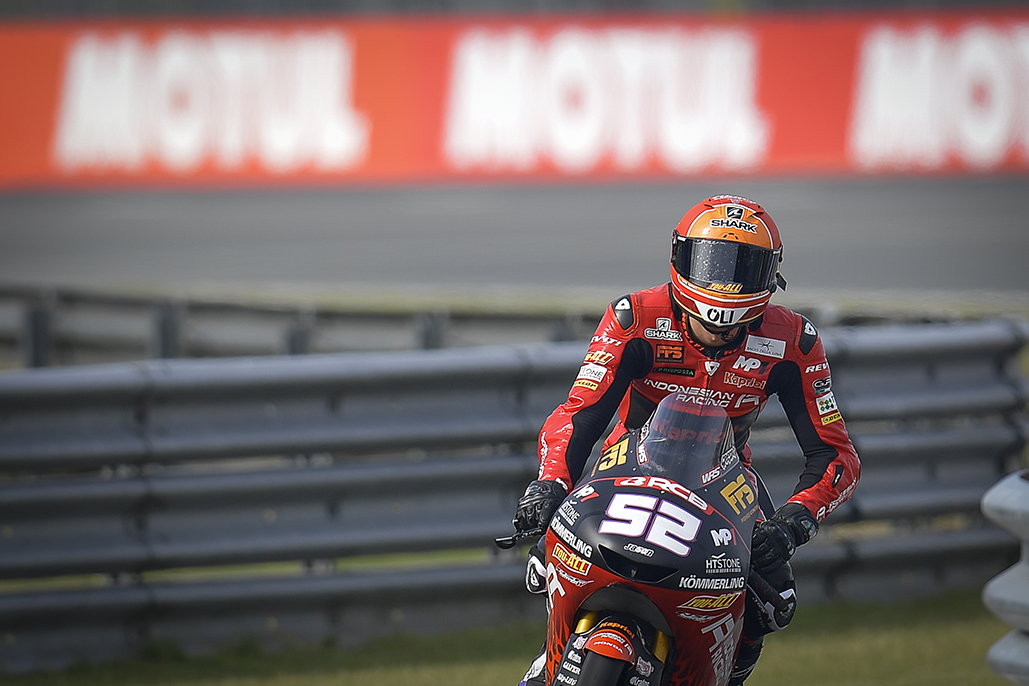 The Spaniard takes his maiden pole despite never having raced at the venue before, Acosta sidelined on Saturday

Jeremy Alcoba (Indonesian Racing Gresini Moto3) took his maiden pole position at the Motul TT Assen, the Spaniard mastering the track on his first try as he makes his racing debut at the Drenthe venue this weekend. His new lap record, a 1:41.194, gives him two tenths in hand ahead of Romano Fenati (Sterilgarda Max Racing Team), with Dennis Foggia (Leopard Racing) completing the front row.

Some drama hit for Moto3™ ahead of qualifying too, with Championship leader Pedro Acosta (Red Bull KTM Ajo) involved in a multi-rider incident in FP3 and subsequently taken to Groningen hospital for a check up, alongside BOE Owlride’s Stefano Nepa and Riccardo Rossi, who were also involved – as was Ryusei Yamanaka (CarXpert PrüstelGP).

Acosta was declared unfit for upper back and chest trauma on Saturday as a precaution, which ruled him out of Q2. If he is able to start on Sunday, he will line up 18th.

Q1
Jaume Masia (Red Bull KTM Ajo) was under some pressure to perform after a weekend of ups and downs so far, and the Spaniard did just that as he headed through top, leading the way from rookies Xavier Artigas (Leopard Racing), Lorenzo Fellon (SIC58 Squadra Corse) and Izan Guevara (Gaviota GASGAS Aspar Team).

Alberto Surra, newly in at Rivacold Snipers Team, was the only crasher, rider ok.

Q2
Q2 saw pole decided late in classic Moto3™ custom. John McPhee (Petronas Sprinta Racing) set the early benchmark, a 1:42.043, but typically, the times would tumble. Niccolo Antonelli (Avintia Esponsorama Moto3) took over at the top next, as fifth place Gabriel Rodrigo (Indonesian Racing Gresini Moto3) then produced a world class save to stay on board at the rapid Turn 15 left-hander.

Kaito Toba (CIP Green Power) was next to take over on top by just 0.004 over Alcoba, the latter then going quickest overall with a 1:41.808. Second in the standings Sergio Garcia (Gaviota GASGAS Aspar Team) then made his move to the top, however his 1:41.473 was 0.335 faster than anyone, before Fenati struck to shoot up to first. However, latched onto the back of Foggia, Alcoba took the chequered flag next and picked up his maiden Grand Prix pole position with a new lap record to boot – at an entirely new venue for the number 52.

The Grid
Alcoba, Fenati – who has two long Lap penalties to take, awarded on Friday – and Foggia lock out the front row, with Garcia spearheading Row 2. Toba and Rodrigo line up alongside Garcia as just 0.340 splits the front couple of rows at the Cathedral of Speed.

Antonelli slipped to P7 after briefly holding P1 in qualifying, with Darryn Binder (Petronas Sprinta Racing) in P8 and Artigas completing the third row, just over a tenth clear of Masia in P10. McPhee, Suzuki and Guevara are next up.

The Cathedral is ready for another Moto3™ showdown, with a big gain in the title fight potentially on the line. Will it be another battle royale? We’ll find out from 11:00 (GMT +2) local time on Sunday.

Jeremy Alcoba: “When I did the track walk, I said to my team that this track was nice, nicer than Sachsenring. In the Sachsenring, I did a good job, so here I feel better about the start. Little by little, work alone. I know that we need a bit of slipstream for a good lap, but then we feel really good on the bike. Really happy before the summer break with this goal, because we followed it so thanks to my team for this bike.”