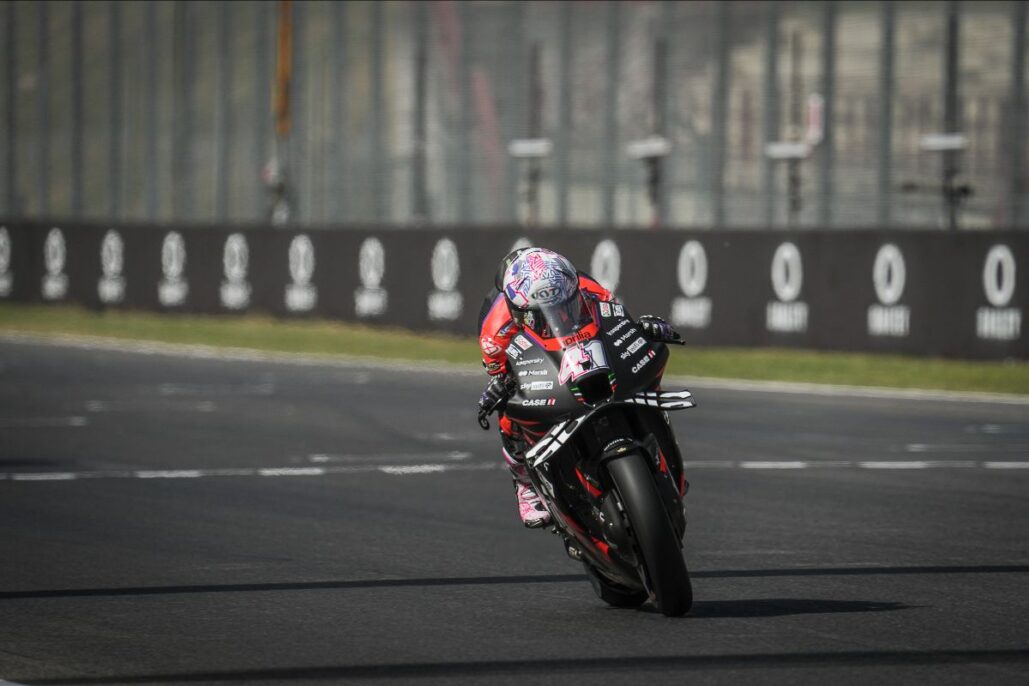 A duel on Day 1 sees the Noale factory upset the Ducati lock out in the top six.

Less than half a tenth decided the top spot on Day 1 at a scorching Gran Premio d’Italia Oakley, with Aleix Espargaro (Aprilia Racing) just edging out home hero Francesco Bagnaia (Ducati Lenovo Team) as the two ended Friday split by just 0.049. Third went the way of Jack Miller (Ducati Lenovo Team), with Aprilia and Espargaro the only presence able to break a Ducati stranglehold on the top six as the two Italia factories came out fighting on Friday.

FP1
LCR Honda Idemitsu’s Takaaki Nakagami dominated the final FP1 timesheets, four tenths clear, but it had been much closer than that. The Japanese rider was already fastest in a top four covered by just 0.031 seconds when he bolted on new medium compound Michelin slick tyres, front and rear, and put in a 1:46.662.

Before Nakagami’s rise, Bagnaia had been quickest on home soil for both rider and factory. He had clocked a 1:47.070 which Alex Rins (Team Suzuki Ecstar) came so very close to matching when the Spaniard set a 1:47.071. Then, just before the half-hour mark, Aleix Espargaro did match it – a 1:47.070 exactly – before Nakagami moved the goal posts.

Le Mans winner Enea Bastianini (Gresini Racing MotoGP™) was fifth with a 1:47.186, with Maverick Viñales (Aprilia Racing) only 0.005 further adrift and Miller next up in seventh after an early tour through the gravel, too.

Miguel Oliveira (Red Bull KTM Factory Racing) ran across the grass on the way to San Donato when he had a close call with Aleix Espargaro, also notable was Espargaro’s Aprilia team-mate Lorenzo Savadori, the Noale manufacturer’s test rider running with a REAR wing on his RS-GP…

When the time attacks came in the final minutes, Bagnaia punched out a 1:45.940 to go to the very top, with Miller following him across the line to set a 1:46.313 and Zarco also in tow as he rolled out a 1:46.349. They were first, second, and third, with more Ducati riders also in fourth, fifth and sixth, but Aleix Espargaro had other ideas – he moved the marker to a 1:45.891 in the final three minutes, thanks in part to a slipstream from team-mate Viñales.

Bagnaia had run off at San Donato as soon as he’d set that high-1:45, but regrouped and almost reclaimed the mantle of fastest lap as he clocked a 1:45.957 with the chequered flag out. He would stay second though, ahead of Miller and Zarco, with Marini fifth thanks to a 1:46.362, and Bastianini sixth.

Zarco was also in the thick of the action for different reasons over the course of the session. His early flyer was still the benchmark when he tucked the front of his Desmosedici at Materassi, an incident which would not only scuff Pramac’s new purple livery but also caused a brief red flag period to clean up the gravel which had been dragged onto the track, rider ok.

Rins later had a similar crash to the Frenchman, before Zarco went down again in the final minute of the session at Correntaio – rider ok once again.

Provisional Q2 places
Behind that top six of an Aprilia leading five Ducatis, Red Bull KTM Factory Racing’s Brad Binder was the only other rider in the top eight who wasn’t on Borgo Panigale machinery, the South African slotting into seventh on a 1:46.439. Rookie Marco Bezzecchi (Mooney VR46 Racing Team) impressed once more in P8, while points leader Quartararo was ninth. For now, Pol Espargaro is the other rider into Q2 as it stands.

With forecasts of possible rain on Saturday at Mugello, there will be eyes to the skies overnight as the likes of Jorge Martin (Prima Pramac Racing) in 11th and Marc Marquez (Repsol Honda Team) in 12th wait it out. Marquez was 0.767 seconds off Aleix Espargaro’s pace but just 0.040 seconds outside the top 10, having apparently finished the session on the new RC213V chassis. Rins and fellow Suzuki rider Joan Mir both also have work to do if they are to get into Q2…