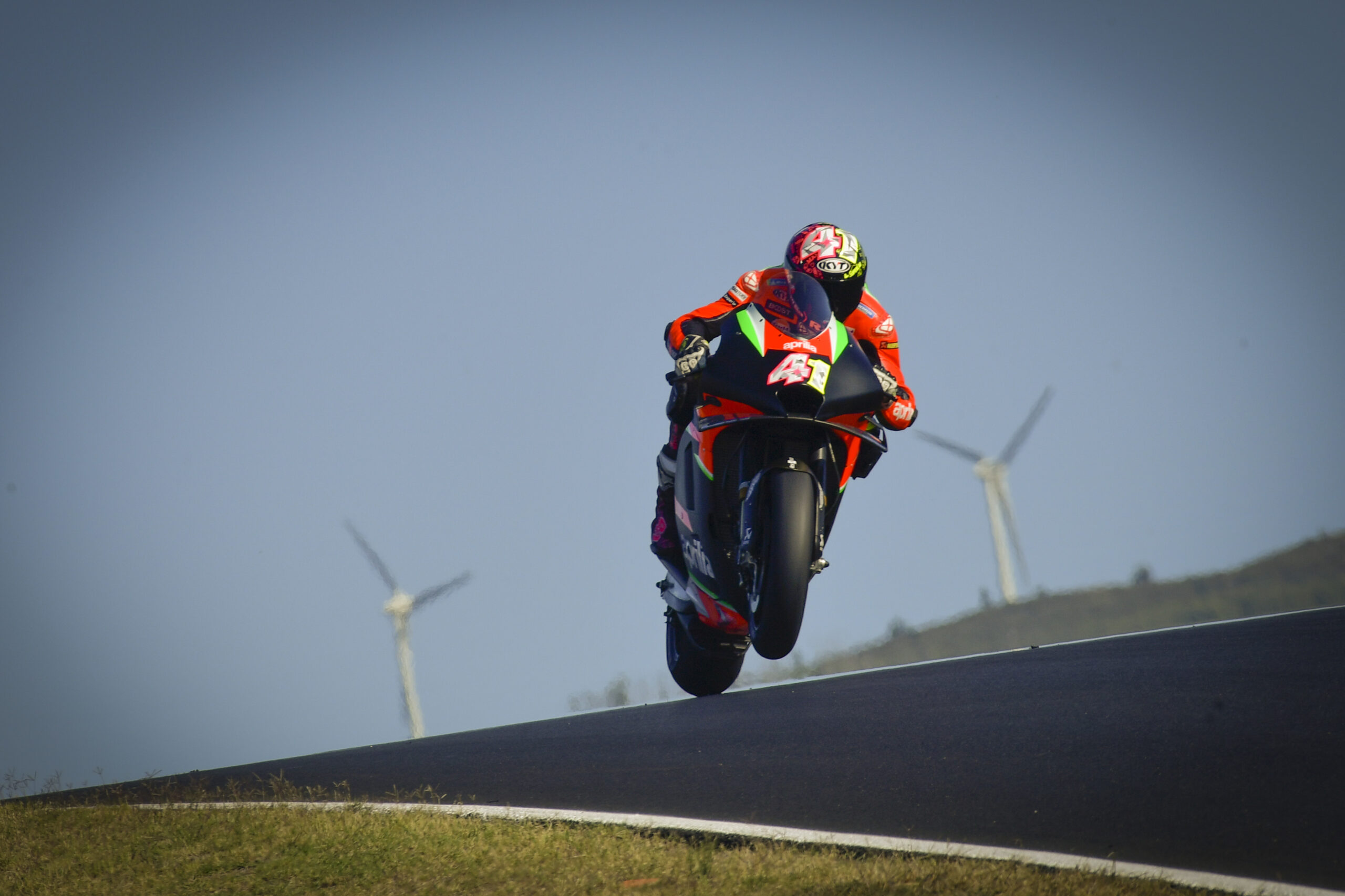 Aprilia reign the first day of action on the Algarve as MotoGP™ gets a taste of the rollercoaster.

Aprilia Racing Team Gresini’s Aleix Espargaro set the fastest ever lap – on two wheels – of the Autodromo Internacional do Algarve on Day 1 of testing, the Spaniard’s impressive 1:40.170 under Jonathan Rea’s fastest WorldSBK Superpole record, which was a 1:40.372 set in 2019. Aleix Espargaro wasted no time in getting down to very respectable lap times on the opening day as he and teammate Bradley Smith were the only current full-time MotoGP™ riders lapping on their premier class machines – concession rules allowing Aprilia to do so – and Smith was second quickest but a second down.

For the rest of the current MotoGP™ riders present, it was street machinery and track familiarisation, with factory test riders taking on the task of starting to dial in each machine ready for November. The general feeling from most? A tough track, but a great circuit. Valentino Rossi (Monster Energy Yamaha MotoGP) said the circuit was “sweet” but “scary”, and teammate Maverick Viñales particularly liked the fast, flowing final corner. Second in the Championship Joan Mir (Team Suzuki Ecstar) said the wheelies will be a challenge on MotoGP™ bikes. Many said point blank that they expect Yamaha to start the race weekend as favourites, with the track seemingly suiting the YZR-M1’s characteristics….

On the other hand, the Ducati riders seemed a little more reserved about tackling the venue on their MotoGP™ machinery. Andrea Dovizioso (Ducati Team), Jack Miller (Pramac Racing), Danilo Petrucci (Ducati Team), Pecco Bagnaia (Pramac Racing), Johann Zarco (Esponsorama Racing) and Tito Rabat (Esponsorama Racing) all attacked the layout on superbikes as they focused on familiarisation, with test rider Michele Pirro putting in the laps on the GP20 to get the Borgo Panigale factory some data for the Portuguese Grand Prix. Pirro’s fastest time on Wednesday was a 1:41.654.

Back at the now-anointed “favourites” Yamaha, Petronas Yamaha SRT’s Franco Morbidelli was also on track alongside the aforementioned Viñales and Rossi, meaning Fabio Quartararo (Petronas Yamaha SRT) was the only Yamaha absentee on Wednesday as the Championship leader focuses on his upcoming home GP. Viñales’ R1 superbike was only one of three street machines fitted with transponders, with his 1:43.699 enough to see him end the day over a second quicker than the other two whose laptimes we know: Miguel Oliveira (Red Bull KTM Tech 3) and Brad Binder (Red Bull KTM Factory Racing), respectively. Viñales completed 41 laps in the afternoon session.

Also on Yamaha business was test rider Jorge Lorenzo, who enjoyed his first time on a MotoGP™ bike for the first time since February’s Sepang Test. The five-time World Champion set a best time of a 1:44.910 as he got reacquainted with the Yamaha and ‘The Spartan’ will be back on track on Thursday to continue his and Yamaha’s work on tyres, the gearbox and general base settings for the Grand Prix at the venue,

KTM’s Dani Pedrosa, Lorenzo, Pirro, Suzuki’s Sylvain Guintoli and Aprilia’s Lorenzo Savadori will be lapping Portimao on Thursday as the respective factory test riders continue to gather useful data, with everyone else heading to Le Mans for the French GP. Quartararo, Iker Lecuona (Red Bull KTM Tech3) and Cal Crutchlow (LCR Honda Castrol) were the only full-time riders not in attendance at the Algarve layout, but we’ll see them all in action this weekend at Le Mans!