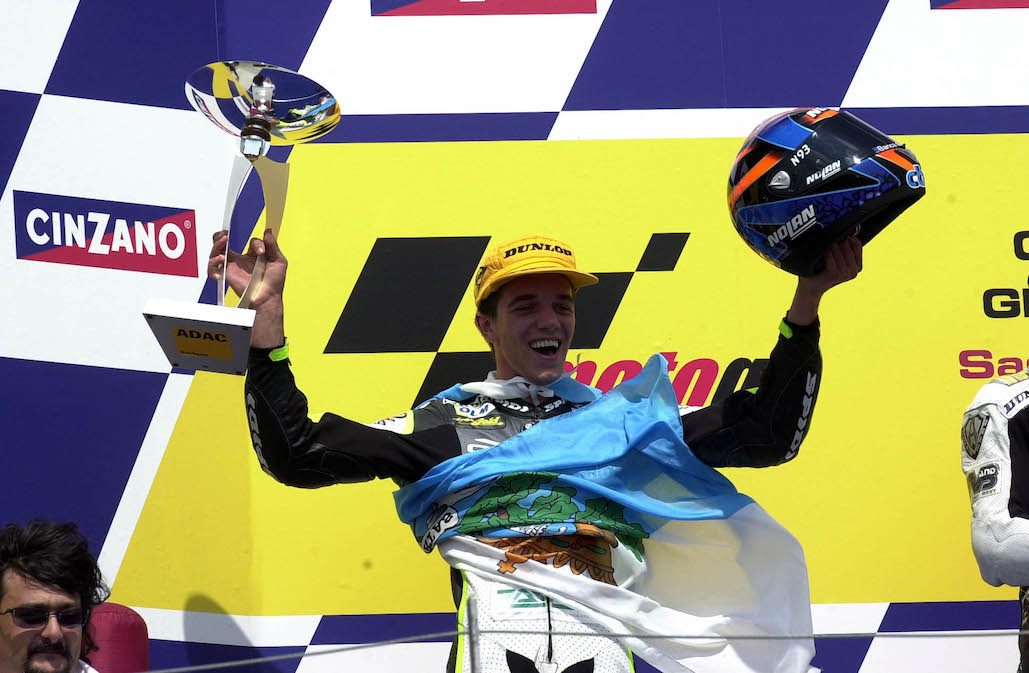 “Saying goodbye to the MotoGP tracks, to the paddock, to my colleagues and everything that was my home for twenty years is absolutely not easy. The most important parenthesis of my life comes to an end with the 2020 final round of MotoE at Le Mans.

Twenty years as a professional rider in the World Championship: victories, podiums, joys and sorrows but, above all, half of my life spent traveling around the world at full speed.

Now I am an adult, I am a team manager, a federal instructor, I work on TV, I teach people how to ride a motorcycle on track safely and having fun. Many commitments that however do not make me forget that I am first of all (and forever) a rider.

Regrets? No, at all. I have had a career that I think is incredible, I have met incredible people and I have seen beautiful countries, many different worlds that have enriched me over the years.
When I started I was 15-years-old with a pageboy weird haircut and a great desire to “open the gas”. Now I am a man with some wrinkles but the desire to “open the gas” has remained the same, even if in other fields and with a different spirit.

A dutiful THANK YOU goes to all those who believed in me, first of all my family, to all the extraordinary people who worked with me, to my friends and my fans for always supporting me.

With these words Alex De Angelis said goodbye to racing after a career that began in 1999. The rider from San Marino, who will finish his second season in MotoE with Team Octo Pramac’s Energica, has therefore decided to “hang up his helmet” After 21 years of racing.

De Angelis in his long career was one of best rider of the 125 class, where he was “Rookie of the Year” in 2000 and vice world champion in 2002; of the 250 where he raced for Aprilia Racing fighting with the best riders in the world in the category from 2003 to 2006, obtaining podiums and victories; in the MotoGP where he won a second place in Indianapolis on the Honda of Team Gresini; in Moto2 where he collected victories and podiums; in Superbike where he reached the second step of the podium in Germany aboard the Aprilia RSV4; until the MotoE with which he will end his career after the Le Mans races.

De Angelis will still be a protagonist of the paddocks thanks to his new activity as Team Manager of the Roc & Dea team engaged in the CIV (Supersport 300 class) where he wants to discover and train new talents.

ALEX DE ANGELIS’S BIOPIC
From San Marino’ parents, Alex was born in Rimini on February 26, 1984 into a family where the passion for engines and speed can be considered normal. His father, Vinicio, in fact, was a rally car tuner and passed on the passion to Alex and his brother William.

At the age of 7, the two received a mini bike as a gift and with it they began to get passionate and to make their first races on the Miramare track, just a stone’s throw from home.

The good results and the determination shown open the doors for the World Championship. The debut in the world series took place in 1999 in Imola where he takes part in the GP as a wild card. From this moment on, Alex De Angelis’ career changes pace and begins a constant escalation.

In 2000, Alex still riding a Honda of Team Matteoni, and with this team he did all the season in the World Championship in the 125 class, winning the “Rookie of the Year” award.

The first world podium arrives in 2002 in Germany. Alex De Angelis gets it riding a 125 Aprilia RS managed by Lucio Cecchinello’s team.

2003 is a year of satisfactions: the San Marino rider becomes one of the protagonists of the 125cc world championship and ends the season as world vice-champion.

The second final place in the season and the continuity in the results opened him the opportunity to race in the 250 class, in which he will line up in 2004 season on the official Aprilia Racing saddle. At the end of his debut season in the “quarter of a liter” class, Alex was fifth in the ranking.

In 2005, Alex De Angelis races with the colors of the internal team from Noale, the MS Aprilia Italia Corse and closes the season seventh overall, but takes home two second places and two third positions.

The following year, in 2006, De Angelis was still an Aprilia Racing official rider in the Aspar Team, climbing on the podium 11 times. He closed a very convincing season (third position on the final ranking), with his first victory in the world championship, obtained in the closing round of the championship at the Valencia Ricardo Tormo circuit.

The consistency in the results were confirmed in 2007, when Alex De Angelis, with eight podiums in the season, confirmed himself third in the 250cc world championship final rankings.

2008 is the year for him of the big jump into the premier class. Alex De Angelis makes his MotoGP debut in the ranks of Team Gresini. This is not exactly an easy season, but Alex shows, on more than one occasion, his skills and potential by touching the podium in the Italian and German GPs. Alex De Angelis’ first season in the premier class ends with 14th place in the standings.

In 2009, Alex De Angelis once again wears the colors of Team Gresini and this is the year of his podium in MotoGP. On 31 August in Indianapolis, the blue and white flag of San Marino is hoisted on the second step of the podium, thanks to a decidedly hard-fought race which ended for Alex De Angelis close to victory. Riding the Honda of Team Gresini, De Angelis also obtained fourth place in the Australian GP and in the British GP. These results, together with the fifth place in the Dutch GP at Assen, allow him to obtain the eighth place in the world championship’s ranking.

In 2010 the transition to Moto2 with the RSM Scot Team. This was a not very lucky season, which sees Alex De Angelis forced to miss the Spanish GP due to an injury and not to participate in the British GP due to an injury for a crash in free practice. During the same year Alex was called to MotoGP to replace the injured Hiroshi Aoyama in the German and Czech Republic GPs.In the 2010 season also there is the transition to Team Jir always in Moto2 with which he will win the Malaysian GP, ​​will get second place in  Australia and a third place in the Portuguese GP.

In 2011 Alex De Angelis continues his adventure with Team JIR obtaining a third place in the GP of Germany and a victory in the GP of Australia, closing the season in fourth position and registering the achievement of world points in all the races of the season except one.

In 2012, Alex De Angelis is at the start of the Moto2 season with the NGM Forward Team, but he will change bikes, going from FTR to Suter and this will force Alex to do a second internship “in the race” which has not prevented him from obtaining a third place at the Sachsenring and a victory in Malaysia. To be recorded the early end of the 2012 season for Alex De Angelis due to a left hand injury he got for a crash at Phillip Island circuit.

The 2013 season sees Alex De Angelis still riding the Moto2 of Team NGM Forward, with a participation in the MotoGP Class at the United States GP at Laguna Seca on the Team Ignite Pramac Desmosedici GP13 ended with an eleventh position.

In 2014 Alex De Angelis is still a Moto2 with Team Tasca, but in mid-season he seizes the opportunity to jump back into MotoGP replacing Colin Edwards on Team NGM Forward’s CRT Yamaha.
In 2015 MotoGP is once again Alex De Angelis’ class, this time riding the ART machine of Team Octo Iodaracing. With this CRT bike he will be the protagonist of his worst injury in his career. Due to a crash in free practice at the Japanese GP, Alex remains in induced coma for a few days, then he will begin a long recovery path that he faced with tenacity and stubbornness.

The efforts to get back in shape paid off the following year. In 2016 De Angelis is again with the Iodaracing Team making his Superbike debut on the Aprilia RSV4. In the new class, De Angelis gets a second place in Race 2 on the Lausitzring track in Germany.

In 2017 Alex De Angelis is still in Superbike, but riding the Kawasaki ZXR1000RR of Team Pedercini, but will return in the season in Moto2 as a wild card in the GP of San Marino and the Rimini Riviera with The Intact Team and then in Silverstone with the Tasca Team.

2018 is the year of change. Alex De Angelis begins his adventure as journalist from the pit box for the italian broadcast company SKY Motori in the MotoGP races and worked as a coach of the Moto2 rider Federico Fuligni. Alongside this, he works as an instructor for driving courses.

In 2019 Alex confirms himself to the microphones of SKY Motori television, continues as an instructor but returns to the races with Team Octo Pramac MotoE, becoming one of the strongest rider of the new cathegory, obtaining two fourth places in Austria and Valencia, finishing in seventh final position.

2020 is still with the Octo Pramac MotoE Team, but he is also Team Manager of the Roc & Dea Team which deploys young talents in the Italian Super Sport 300 championship and the activity as federal instructor of the FMI (the Italian Motorcycle Federation).