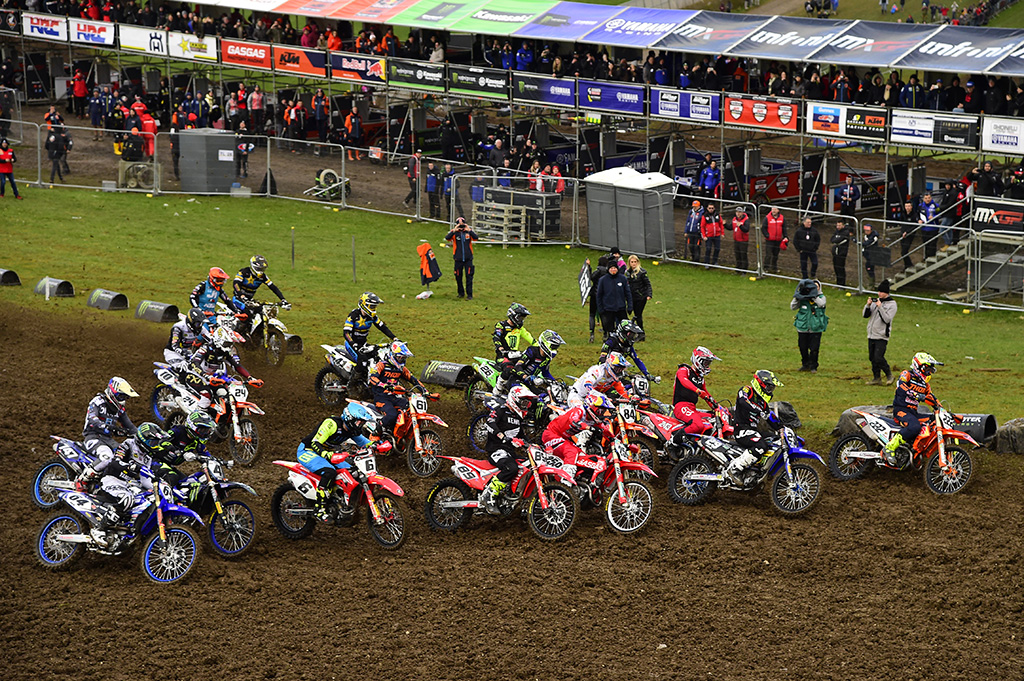 The 2021 FIM Motocross World Championship continues this weekend with the MXGP of Great Britain, round two of the series!

MXGP will return to the valley of Matterley Basin in Winchester, for what will be the 11th British Grand Prix to be held at the hardpack venue. Matterley Basin is one of the favourites on the FIM Motocross World Championship calendar not only for the riders who look forward to racing there every year, but also the fans who can enjoy unobstructed views of the entire circuit.

The Orlyonok circuit one week ago kicked-off the MXGP season with a bang and with plenty of battles, now the heat will be brought to Great Britain as the riders continue what they started in Orlyonok.

Alongside the MXGP and MX2 categories, joining us for the first time this year will be the EMX125 Presented by FMF Racing and EMX250 riders for their opening rounds of the 2021 campaign.

The EMX125 Presented by FMF Racing category will see some familiar faces return for another season in the popular two-stroke category, with the likes of Valerio Lata from MRT Racing Team KTM and Haakon Osterhagon of Fantic Factory Team Maddii back once again after finished 9th and 10th respectively in 2020.

While the EMX250 is stacked with young talent, and it will be an intense season for the title hopefuls. Making the move to EMX250 this season is last year’s EMX125 Presented by FMF Racing Champion Andrea Bonacorsi, who will look to impress on his Hutten Metaal Yamaha Racing machine, along with Liam Everts who will look to put his bad luck of last season behind him and add another win in Matterley Basin, after topping the EMX125 podium at the British round last year.

Jorgen Matthias-Talviku of No Fear / Jumbo BT Racing Team will return once again as he set’s his sights on the title after making several podium appearances last year and finishing 5th in the championship in 2020, along with Tom Guyon who placed 8th last season and will return again in 2021.

Other familiar faces to look out for include Jeremy Sydow of Hutten Metaal Yamaha Racing and Kevin Horgmo from SM Action Racing Team YUASA Battery, who will return to EMX250 after a season in MX2, as well as Rockstar Energy Husqvarna Racing’s newest recruit Maxime Grau.

Meanwhile Nicholas Lapucci and Federico Tuani of Fantic Factory Team Maddii will make the move from EMXOpen into the EMX250 class to test their efforts in the competitive category.

Defending World Champion, Tim Gajser of Team HRC got off to the most perfect start in Orlyonok, going 1-1 to secure the first overall victory of the season and start the year with the red plate on his factory CRF450RW.

While we expected Gajser to pick up right where he left off in 2020 after his title victory, for the Slovenian to arrive in Orlyonok and dominate the way he did was just impressive, especially when we think about race two, when he came back from outside the top 20 to win the race.

Matterley Basin is another hardpack circuit, like the Honda rider’s home track ‘Tiga243Land’ where he has spent a lot of his off-season putting in lap after lap. Carrying that momentum from the Orlyonok, there is no doubt that we will see Gajser going for more race wins in Great Britain on a terrain that he is very comfortable on!

Last year’s MXGP of Great Britain winner Jeffrey Herlings of Red Bull KTM Factory Racing will be looking for more race practice as he aims to get up to speed with the rest of the field. During the MXGP of Russia, Herlings shared that his time healing from injury has cost him crucial race time and this weekend’s GP is another opportunity for the Bullet to get behind the gate and battle with the leaders. And while Herlings claims he still needs time, it’s still likely that we could see him win races and stand on the podium once again.

For fellow Red Bull KTM Factory Racing rider, Antonio Cairoli, this weekend will be a chance to make up for lost ground in Orlyonok. The second race, Cairoli looked good as he led the way, until Gajser was able to catch and pass him. After that, thing’s went south for the Italian, as he crashed out on the slick finish jump, which damaged his bike forcing him to DNF and costing him a podium finish.

Cairoli has always been strong in Matterley Basin, having won there 5 times before, so there’s no doubt the Sicilian will be keen to make up the points he lost during the MXGP of Russia two weeks ago.

Also looking for redemption will be Glenn Coldenhoff and Ben Watson of Monster Energy Yamaha Factory Racing, with the pair getting off to a tough start to the season. Both failing to finish inside the top 10 overall will be motivated to show their strength in Great Britain, especially Watson who will race on home soil. Their teammate Jeremy Seewer will also be looking to get inside the podium this time around after finishing 5th overall at the opening round.

Meanwhile Monster Energy Kawasaki Racing Team’s Romain Febvre will be chasing more podium success after an eventful second race in Orlyonok, which still put the Frenchman on the podium, despite him ending up in the fence as he chased Pauls Jonass. Febvre placed third overall two weeks ago and will no doubt want to continue this momentum at the British GP.

Two stand-out performances from the MXGP of Russia no doubt go to Alessandro Lupino of MRT Racing Team and Pauls Jonass of Standing Construct GASGAS Factory Racing. Lupino put together two very impressive races, going 5-4 for 4th overall, missing out on a podium spot by just a mere 3 points. It’s a new side of Lupino that we got a glimpse of last season in Trentino, and we look forward to seeing more of that in 2021 as a podium finish is looking stronger than ever.

As for Jonass, the Latvian was dealt a blow in the opening race in Orlyonok where he didn’t finish though the second race saw the GasGas Factory rider finish the race third, behind Gajser and Herlings. It’s a new season and a new team for Jonass and so far, it’s looking good.

The MXGP of Great Britain will also see the return of Arminas Jasikonis of Rockstar Energy Husqvarna Factory Racing, as he is set to join his teammate Thomas Kjer Olsen in Matterley Basin. The team got off to a nice start this season, with Olsen placing 6th overall during the first GP with two very solid top 10 results which he can only build upon in the next few races.

Of course, there’s also the ‘home heroes’ Shaun Simpson and Nathan Watson, along with Ben Watson of course, who will line-up in Matterley Basin for their home Grand Prix. Racing in front of the local crowd always gives the riders that extra bit of motivation and there’s no doubt we will see the Brit’s give it their all for their fans.

Much like Gajser, the MX2 defending world champion, Tom Vialle from Red Bull KTM Factory Racing also started the season with a perfect score, carrying 50 points and the red plate into the second round this weekend.

For Vialle the goal this season is consistency, something that he was able to perfect last season and so far in 2021 he has done the same. Though it is early days, the Frenchman has matured as a rider quite a lot since the start of the season last year, so mistakes that he made in Matterley Basin last year are unlikely to happen again, therefore a bet that we will see Vialle on the podium is looking pretty safe at this stage.

His teammate Rene Hofer was close to a podium finish in Orlyonok a couple of weeks ago and also last season in Matterley Basin too. Hofer is back this season from injury and so far he is looking strong. His performance last year in Great Britain was good too, as he finished second in the second heat behind Vialle. We could expect something like this once again, as the Austrian will be keen to show what he can do this season.

Ruben Fernandez of Honda 114 Motorsport will enter the British Grand Prix off the back of his first podium finish in MX2, a big confidence boost for the Spaniard no doubt. Though it will be interesting to see whether Fernandez can deliver once again and add a couple of strong races to his tally.

Meanwhile Mathys Boisrame will want to do the same. There’s no secret that the Frenchman is a strong hardpack rider and with Matterley Basin a venue with a hard base, we could see the F&H Kawasaki Racing Team rider excel once again, he’ll just need the start to stick with the leaders. And his teammate Roan Van De Moosdijk and Mikkel Haarup will aim for the same. Haarup didn’t get off to the best start in Orlyonok, while Van de Moosdijk edged close to a podium finish. No doubt the Kawasaki riders will push for a podium spot, especially Haarup who finished third overall in Great Britain in 2020.

This weekend will also be an opportunity for redemption for Maxime Renaux, Thibault Benistant and Jago Geerts. Renaux was looking like a likely podium finisher in Russia, though struggled and only managed a 6th overall. Meanwhile Benistant and Geerts had problems of their own and placed 11th and 12th respectively. For Geerts it’s not the start of the season that he needed, so will be keen to claw back as many points as possible this time around.

Rockstar Energy Husqvarna Factory Racing’s Jed Beaton and Kay De Wolf are another pair to look out for as both will hope for two clean heats and solid points. Beaton finished 7th in Orlyonok and De Wolf 16th, as both got caught up in some unfortunate crashes with only slowed them down. Though the British GP is another opportunity to showcase what they can do and fight up there with the leaders.

Returning for his home Grand Prix will be Hitachi KTM fuelled by Milwaukee rider Conrad Mewse, who didn’t line up the races in Orlyonok due to illness. With two weeks of recovery time, the hope is that we will see Mewse line-up healthy and ready to fight for top positions in front of his home crowd.