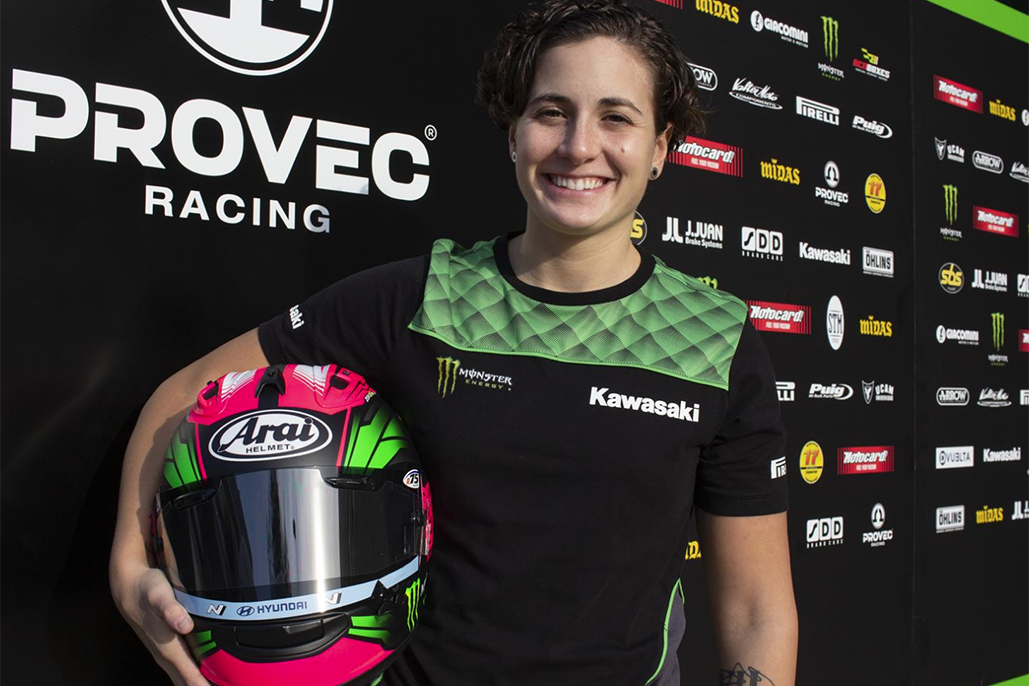 The only woman to ever win an FIM sanctioned road race Championship, Ana Carrasco, has signed a contract with the Provec Kawasaki team to fight for honours in the 2021 WorldSSP300 Championship.

Recovering from a recent fall in testing, Carrasco was unable to complete the 2020 season concentrating instead on her recovery to full fitness having fractured several vertebrae which have since been successfully fused.

Her focus and passion for success remains undiminished and her intention is simple, to regain the premier position in her chosen championship underpinning her past success and to add racing history by achieving a second World Championship.

Riding a Ninja 400 prepared by the same Catalan enterprise which also manages Kawasaki’s successful WorldSBK team, the link between Carrasco and Provec is a logical fit for both parties and a strong platform to build on previous success, as she explains.

Ana Carrasco: “2018 was a very special year for me and in some ways it only feels like yesterday. Winning the WorldSSP300 world championship for sure changed my life forever. Not only had I achieved one of my life goals but also I became a symbol for other women to aspire to make their dreams real. On the grid, I am a racer like anyone else, not a woman but a competitor. It’s on this level I will race with the support of Provec and Kawasaki in 2021 and my desire to win the championship a record second time has been the fuel for my recent recovery. I want to thank not only Kawasaki and Provec, but also all our partners and sponsors that even in this Covid situation and despite the injury they support this project for coming season”.

After a punishing training and fitness regime that would daunt the most accomplished athlete, Carrasco is now ready to remount her Ninja and has won plaudits not only in her native Spain but worldwide as Guim Roda Provec Racing Director explains.

“Both Ana and the Provec team have unfinished business in the WSSP300 Championship. There is such a depth of support for her in Spain and across the world which psychologically seems like it’s worth a second per lap off her times. We have the machinery, the expertise and, most importantly, the rider to succeed in the coming season. This is a project built just for Ana, her efforts will benefit the WorldSSP300 Championship and secure incredible media exposure to all Championships and to Kawasaki, so we feel our obligation to secure her a competitive project to keep making history. She deserves, as a rider, and as a person, this effort – for sure 2021 will be her time to make history once more.”

Steve Guttridge, Race Planning Manager for Kawasaki, explained how Ana and the WorldSSP300 series is such a logical fit for Kawasaki.

“Since its inception, Kawasaki has been the major player in this championship and for 2020 we remain manufacturer, team and rider champions. Success on track for the Ninja 400 is matched by interest in Kawasaki showrooms across the globe. For us this strong connection between racing and our customers is one of the things that makes this championship so attractive.

For Kawasaki, Ana is what you could call the “final part of the jig-saw”; a former world champion for Kawasaki and a globally recognised athlete in her own right. Her fight back to fitness is characteristic of her determination on track.

Kawasaki and Provec are both determined to play a part in her journey towards a second world championship in 2021.”