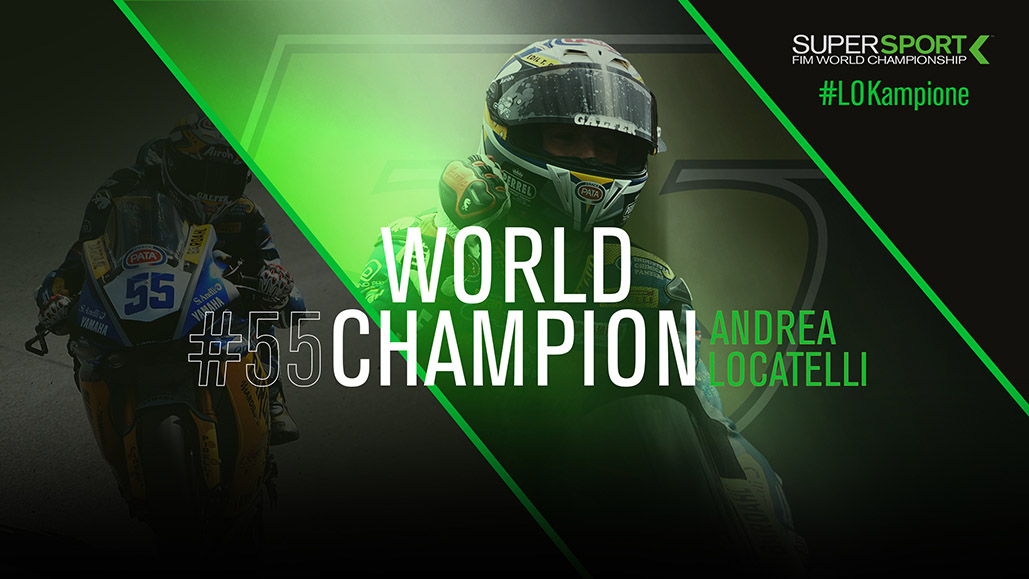 It rarely happens in any Championship class, it has never happened in the FIM Superbike World Championship paddock; it’s happened only a few times in motorcycle racing history, the most recent in a World Championship being Giacomo Agostini in 1970. You hear of people winning Championships without winning a race but it’s a true gem to win nearly everything on your way to World Championship glory. In 2020, rookie Andrea Locatelli (BARDAHL Evan Bros. WorldSSP Team) has won all but one race, and even then, it was only the weather that stopped him. He’s wrapped the title race up with some four races to go. WorldSSP has never witnessed such a whirlwind.

Locatelli came into the World Supersport Championship in a bid to show to the world that he could be Champion. A mildly successful yet rather uneventful spell in the Moto2™ World Championship saw him leave the MotoGP™ paddock at the end of 2019 and head to World Supersport’s best team – reigning Champions BARDAHL Yamaha. Fabio Evangelista’s Italian team know exactly how to win races and coming into 2020 after their first Riders’ and Teams’ Championships in 2019 filled them all with confidence. But nobody could’ve expected what was on the horizon.

Straight out the box in Australia and Andrea Locatelli was immediately on top Down Under, smoking the opposition to storm to victory by over five seconds. A similar domination to Alvaro Bautista in his debut race in WorldSBK in 2019 but never did we think it’d carry on. Lockdown ensued but Locatelli certainly wasn’t going to be put off. He came to Jerez in July to prove a point and doubled up in Race 1 and Race 2, before heading to the unknown Portimao a week later and doing it again – a track he’d never seen before and in Race 1, with strong competition from Jules Cluzel (GMT94 Yamaha). All the time however, it was the metronomic consistency that was capturing the headlines and captivating the fans: fastest laps set, records broken, pole positions secured and valiant victories thereafter.

Then, it was MotorLand Aragon and back-to-back events on a track that Locatelli knew extremely well. The Italian youngster cleaned up with the opposition in the opening Prosecco DOC Aragon Round, albeit having to fight a little bit more than we’d seen before. The Pirelli Teruel Round was equally as tough and in Race 2, it looked like Locatelli may have finally had to fight in true, frantic WorldSSP fashion, as Raffaele De Rosa (MV Agusta Reparto Corse), Cluzel and Lucas Mahias (Kawasaki Puccetti Racing) brought the fight to the very front. However, De Rosa wiped out Cluzel at Turn 1 early in the race, releasing Locatelli and although Mahias stayed with him for half the race, Locatelli’s ultra-consistent pace broke Mahias.

Now, it’s just Round 6 of an eight-round schedule, but already Locatelli has locked up. He’s pinned down the Championship, locked out the opposition and shut up shop for the others’ title challenge. It’s quite simply breathtaking and rarely is a Championship bolted up this early and rarely are there so many wins – yes, there’s perhaps more opportunity to win in 2020 but not that much more; an average 13-race calendar has had two more tacked on the end and Locatelli’s ten wins thus for have been achieved in less than 13 races. His dominance knows no boundaries.

Andrea Locatelli (BARDAHL Evan Bros. WorldSSP Team):
“It’s a dream! Until then you know it’s alive but it’s an incredible day. We work everywhere, every time very well and this is our objective. This is an incredible day and I don’t have any words but I’m very excited. Thanks to my guys because they work very hard every time and this is the result.”

Fabio Evangelista – BARDAHL Evan Bros. WorldSSP Team Team Principal:
“I knew that Andrea was coming from Moto2 and Moto3 after six years with a lot of experience but to be humble at the beginning during the winter I was thinking about being in the top five or top three positions. I could not have expected such a strong rider with such a fast method of working and so fast on track. We gave him I think the best package possible, 100%, but he finished all of the races because he´s a very good rider.”

The 2020 FIM Supersport World Championship not only went the way of Andrea Locatelli but also to Yamaha, who once again showed their strength and superiority in dominating the Championship. Every single race victory went the way of the Japanese manufacturer, with two of those being Yamaha podium lockouts. Two teams took victory, with the BARDAHL Evan Bros. WorldSSP Team winning 10 and the bLU cRU WorldSSP by MS Racing taking one, with Andrea Locatelli and Andy Verdoïa respectively. It’s back-to-back Championships for the BARDAHL Yamaha squad and on top of it all, Locatelli becomes the first Italian Champion in the class for the Italian team.

Andrea Dosoli – Yamaha Motor Europe Road Racing Project Leader:
“First of all, congratulations to Andrea and Fabio; when we started to discuss last year what we could do together finally we decided when entering this class we should enter at the top with the winning team who won the title the year before, because we strongly believed that he had the potential to fight for the title. And then we put all the pieces together, we started, and the result is here, so congratulations to both of them and congratulations also to all the R6 and the Teams supported by the program because first it’s the fourth title in a row for Yamaha so of course we are pleased about this and this is happening only because we have professional teams, a very talented rider like Andrea and a professional Team Manager as Fabio.

I have been surprised – of course not because he won the title, honestly I expected him to win the title – but in the way he won the title; he has dominated the Championship, and I have been surprised by his approach, his method of working. I still remember Philip Island Race 1 I was in Parc Fermé, he had dominated the Race, the first time on an R6 with a new tyre specification, also a new challenge for the team. He dominated the race and in Parc Fermé of course he was celebrating, he was happy, but he told me ¨Andrea, during the race I understood something, I have spoken with the crew chief, I have spoken with Fabio, the mechanic, the bike is not 100%, we need to work, there is room for improvement, let´s go back to the garage and let’s try to be better for the next one”. This means a lot, I understood that Andrea is something special, then he delivered the results race by race. So, congratulations to all of us, it’s an honour to help you achieve your dreams.”