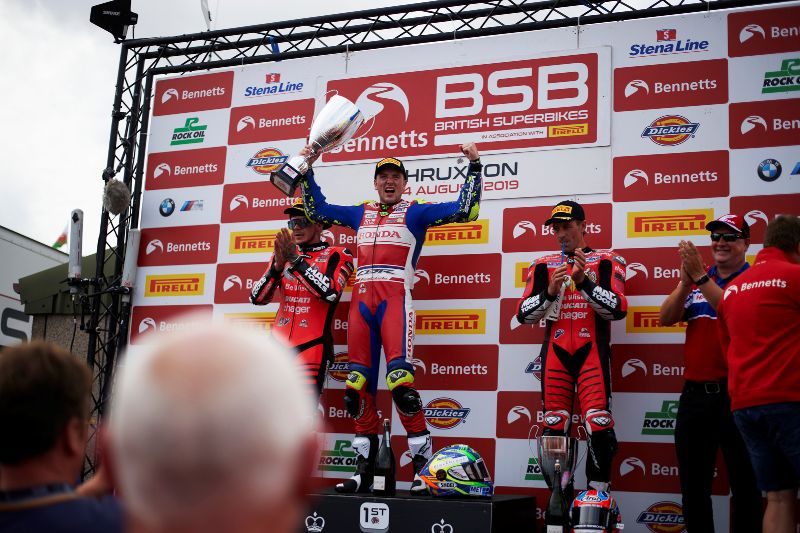 For more information on the Bennetts British Superbike Championship visit www.britishsuperbike.com
Andrew Irwin – Honda Racing
Race one winner
“It is such an amazing feeling to win! I think I passed Jason going into the last lap or something like that and I felt like I had some tyre left. The pace was funny it went up and down a lot with whoever went to the lead. I just wanted to put a strong lap together on the last lap.
“It is a dream come true, it’s been a tough road to get here, the best road and I’ve learnt a lot along the way.
“Whenever I won a Supersport race, I only won one but my team-mate helped me along the way so this feels like my first proper win that I’ve ever got so I’m delighted and I can’t thank Honda enough for all their hard work.”
Josh Brookes – Be Wiser Ducati
Race two winner
“Tyre conservation is on your mind all weekend here at Thruxton so with the second race going from 20 laps to 13 laps and then down to eight laps, I could ride exactly how I wanted to and just went full speed as the tyre was always going to last eight laps.
“I just got my head down and went for it and whilst it may not have been as close as the first race, I enjoyed it a lot more. The field is so level now, every race is tough but Pirelli have done a great job with the tyres and they’re a little bit easier to manage around here now and although I still wanted more from myself, I was happy with the first race podium.
“I got pushed around a bit too much on track and needed to find a little bit more confidence, so the second race win has given me exactly what I needed and it’s great to be back on the top step.”