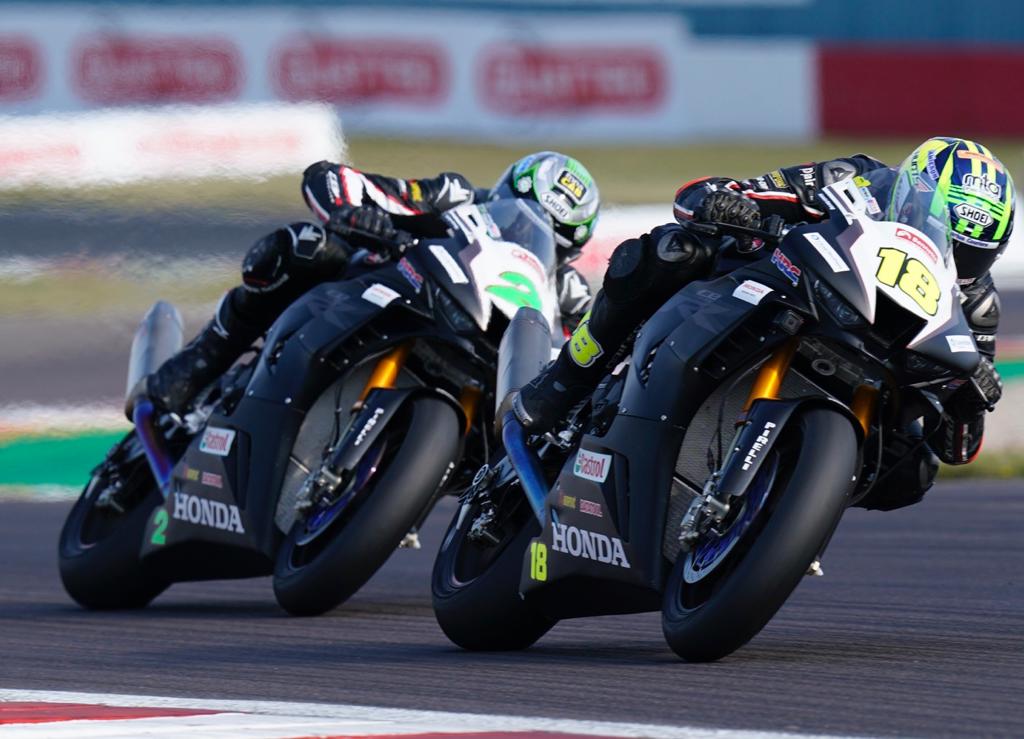 At the start of the race Kyle Ryde had hit the front of the pack on the Buildbase Suzuki from his front row grid position ahead of Héctor Barberá and the Irwin pairing led by Andrew, with Danny Buchan ahead of the two VisionTrack Ducatis.

Andrew Irwin was characteristically attacking straight from the start and he moved into second at Roberts on the second lap with a move on the brakes to pass Barberá on the Rich Energy OMG Racing BMW.

Danny Buchan was holding fifth but he crashed out unhurt at Roberts putting him out of contention on the Massingberd-Mundy Kawasaki. Bradley Ray retired his SYNETIQ BMW on lap five with Barberá also forced out of the race with a technical problem.

By lap six Andrew Irwin had grasped the lead going into Roberts with a move on Ryde, with his brother Glenn also moving his Honda Racing Fireblade ahead a lap later as the Buildbase Suzuki rider came under attack.

Josh Brookes was reeling in the brothers as their sibling rivalry continued; the Australian edging his VisionTrack Ducati ahead into Redgate on lap eight before Ryde cut back to reclaim the position. Brookes was then fighting back, but the Buildbase Suzuki rider was forced to retire with a technical issue.

At the front there was a three-way scrap forming between Honda Racing’s Andrew and Glenn Irwin plus Brookes. On lap 13 Glenn Irwin grabbed the lead with a move at Redgate on his brother with Brookes instantly making a move to push Andrew Irwin back into third.

Brookes was then vying for the lead on the VisionTrack Ducati, but he wasn’t able to make his move until lap 16 on the brakes into Redgate to push Glenn Irwin back into second place. However the brothers then both made a brave move at Schwantz Curve which fired the Hondas into the leading two positions on lap 18.

Glenn Irwin was then holding the lead from brother Andrew with Brookes slightly adrift, and it came down to the last lap when Andrew went for a move on his sibling which he made stick. He then defended hard giving his brother no room to repay the manoeuvre and the pair crossed the line 0.119s apart with Brookes sealing third place.

Christian Iddon held onto fourth place from Tommy Bridewell who worked his way up the order on the Oxford Products Racing Ducati. In sixth place Luke Mossey was able to get the better of Tarran Mackenzie on the leading McAMS Yamaha, ahead of teammate Jason O’Halloran. Pole sitter O’Halloran dropped down the order when he was forced to take evasive action to avoid Buchan’s crash and then had to work his way back up through the field.

Ryan Vickers claimed ninth place for the RAF Regular & Reserve Kawasaki team ahead of Lee Jackson who completed the top ten ahead of tomorrow’s two races.

Fans can watch all of the action tomorrow (Sunday) live on Eurosport 2 and listen to BSB Radio powered by Kawasaki K-Options, which will feature all the live timing and commentary from the track.

“I knew I could pass Glenn in a normal place – he actually always says to me that I never pass people in normal places anyway! And today I couldn’t do that so I had to pass him somewhere a little different, somewhere where you have to trust the front a lot. To be fair the team did a really good job from qualifying until the race today and we made a big step in the braking areas because before that I would have been even worse in the two main areas, but now I feel quite strong there.

“It was a really nice race. I just had to tell myself ‘keep breathing’! I got to the lead and I didn’t want to be in the lead to be honest but I was there. I thought just relax the pace a little bit and then when Glenn came by, I thought he is going to try to go. Then I think Josh passed me straight away as well, and maybe I lost my rhythm for a lap.

“I then got back in to the way of things and once we did that I just settled and found out where I was faster. Glenn did a bit of an Andrew pass on Josh and that let me get by Josh as well, and from there I just sat behind him and just tried to protect second.

“With two laps to go I knew I needed to find out where I could pass him, because I didn’t really think I could. I lined it up on the penultimate lap and then on the last lap I went for it and my mouth and tongue were backwards! Not that I had to do it, but I felt that I could do it safely and I did. I was pretty much past him before we even braked and it was good.

“It is the first race of the season and there are still another 17 to go, so we have to maintain consistency, stay level head and keep doing a good job for Honda Racing, but to take this first win for the new Fireblade is fantastic.”