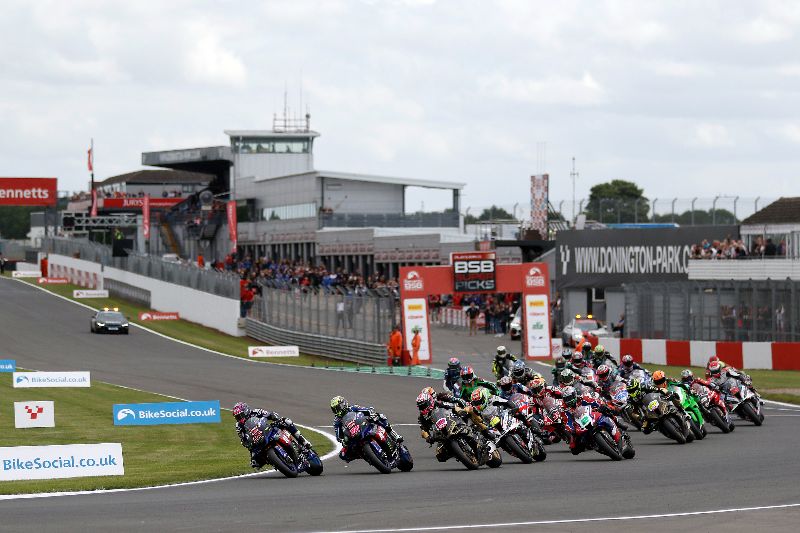 The Bennetts British Superbike Championship reaches the penultimate round of the season this weekend at Donington Park with a slender nine points separating the leading three Title Fighters as the Showdown continues.

Tarran Mackenzie moved to the top of the standings for the first time after an intense Showdown opening round at Oulton Park last weekend. The McAMS Yamaha rider heads into his home round holding a two-point edge over his teammate Jason O’Halloran.

O’Halloran had held a 30-point advantage going into the crucial Showdown phase of the championship, but two crashes last time out in Cheshire decimated his edge and he will be bidding to regain lost ground in the three races this weekend.

Whilst the McAMS Yamaha pairing lock out the leading two positions in the standings, Oxford Products Racing Ducati’s Tommy Bridewell slashed their advantage with a double victory at Oulton Park to fire himself into contention for a debut Bennetts BSB title. He has just a nine-point deficit to overcome this weekend to overhaul Mackenzie at the top ahead of the season finale at Brands Hatch in two weeks’ time.

Christian Iddon was on the podium last at Oulton Park and he is 24 points adrift of Bridewell as the title-winning team continue their fight back this weekend. Peter Hickman on the FHO Racing BMW splits the VisionTrack Ducati teammates, with reigning champion Josh Brookes moving into sixth overall following a double podium finish last weekend.

Danny Buchan and Glenn Irwin complete the Title Fighters with six races remaining in the championship battle. Last weekend’s opening round of the Showdown produced two different race winners with Mackenzie and Bridewell sharing the spoils, as a further four riders celebrated podium finishes as the quest to become 2021 champion intensifies.

Tarran Mackenzie – McAMS Yamaha
Championship leader
“With Jason winning tally before getting to Oulton Park, and the triple at the start of the year, I was fearing for the worst really! I thought a podium in the first race would be alright and damage limitation as Jason was leading, and then when he went down, I knew it was big points to gain on him.

“When I saw the opportunity to try and win I knew I had to try and maximise it as it isn’t often that Jason makes a mistake. To get the win last weekend, especially at Oulton Park and still with my injury, was just amazing. That set me up nicely for the rest of the weekend.

“I now go into Donington Park and Brands Hatch in a really good place and each day and week my injuries get a little bit better, so it makes it even more exciting going into these last two rounds.

“I am really looking forward to this weekend; I ended Donington Park last year in a really good way. Earlier in the year on the National circuit, I had a good weekend and felt as strong as anyone else. We know the Yamaha works well at the next two tracks and they are both ones where I have won a race this year, so I want to enjoy it as much as possible.

“It’s a new position for me to be in; I have led championships before but never in BSB and especially not going into the last races of the season, so it is a new experience for me. I have good people around me, a good team, I obviously have my dad who has won in the past, and I can use my own experience from winning the British Supersport Championship before to go into these last few races.

“I don’t feel like there is any pressure on me at the moment, I just want to go out and try and do the best I can to win as many races as possible, and when I can’t, try to be as close to the win as possible. I can let the rest take care of itself.”