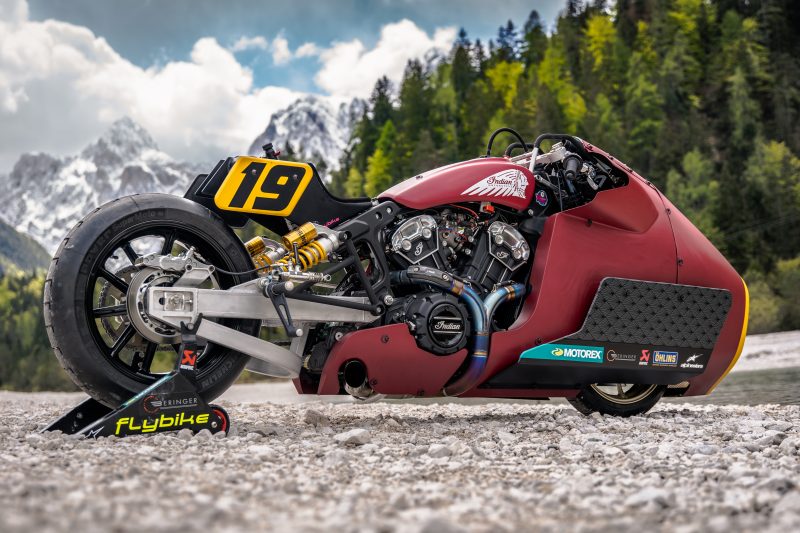 Indian Motorcycle and Workhorse Speed Shop have announced the comeback of Appaloosa at the 2020 Baikal Mile, an extreme test of rider and machine on the ice surface of Lake Baikal, Siberia. Appaloosa v2.0 will make its 2020 racing debut in Russia, revealing a radical new look, from February 25 to March 1.

The Baikal Mile first took place in March last year and is now set to become an annual fixture on the motorsport calendar. Run on the ice off the eastern shore of Lake Baikal, the festival is one of the most unique international motorsport and racing culture events due to the extreme conditions of Siberia. With specially prepared 1/8-mile and 1-mile ice tracks, teams will be challenging themselves to set speed records on a variety of specially prepared vehicles alongside stunt riding, drifting, drag racing, flat track and freestyle motocross.

Brice Hennebert, creator of Appaloosa, is looking forward to the challenge, “The feeling is crazy, it’s a bit like going racing on the moon. There’s absolutely no reference point, we go to a desert of ice in Siberia where it can be -40°C at night -20°C during the day. I’m super excited and a bit lost at the same time as we have no idea what to expect. With just a few days before the flight, I’m focussing on the practical aspects, but I know this journey will be one of the most insane experiences of my life.”

The Scout Bobber, originally transformed by Brice Hennebert for the 2019 Sultans of Sprint series, has been modified for the challenges of racing on ice and the extreme Siberian conditions with continued support from top-level partners Akrapovič, Beringer Brakes, Dunlop Europe, Evok3 Performance, Motorex, Öhlins and tuning advice from Flybike.

To grab the ice and propel Appaloosa down the strip, the SportSmart Mk3 tyres supplied by Dunlop Europe, have been hand-fitted with hundreds of studs, a task which took Brice’s mechanic, Dorsan, four days of work. To control the cooling of the engine from the extreme temperatures, the “mouth” of the fairing has been closed off with a new carbon fibre nose cap and smaller cooling intakes have been added to the side fairings.

Upgrading the NOS system was a priority for better reliability and power with the original system replaced with a Nitrous Express setup. Öhlins Racing has added a steering damper to the full suspension suite supplied in 2019 to keep Appaloosa stable at the higher speeds targeted. Finally, to protect the pilot and to keep a clear view ahead, areas around the wheels have been closed off inside the fairing to control the ice thrown up by the studded tyres.

With such a departure from its original purpose of tarmac sprints, it was fitting to give Appaloosa v2.0 a full makeover in the form of a new paint scheme designed by Benny Maxwell from Axesent, Japan (IG: @axesent) and expertly applied by Matthias from Moto Peinture (IG: @motopeinture).

For such an extreme challenge, Brice has chosen his teammates carefully. “I’m lucky enough to share this incredible adventure with two of my best friends. Sébastien Lorentz and Dorsan “DJ Peeta Selecta,” he says. “Seb, from Lucky Cat Garage and organiser of the Sultans of Sprint championship, will be piloting Appaloosa. Dorsan, the DJ for Sultans of Sprint, will be helping me with the technical aspects as he will all season. Dorsan will also be keeping the ice party going as DJ for the Baikal Mile Speed Festival.”

Sébastien Lorentz commented, “This will be an extraordinary adventure for us all, what can I say? I feel excited to race on ice for the first time, honoured to ride the IndianxWorkhorse Appaloosa and I can’t wait to see what we can achieve with that beast in such crazy riding conditions. I think we are well prepared, and we’ll all give our best to achieve a great result.”

The completed build and new look will be revealed shortly after the team arrives at Lake Baikal in late February.

The epic trip to Siberia and the action from Lake Baikal can be followed across Indian Motorcycle social channels with the hashtag #IndianxWorkhorse.