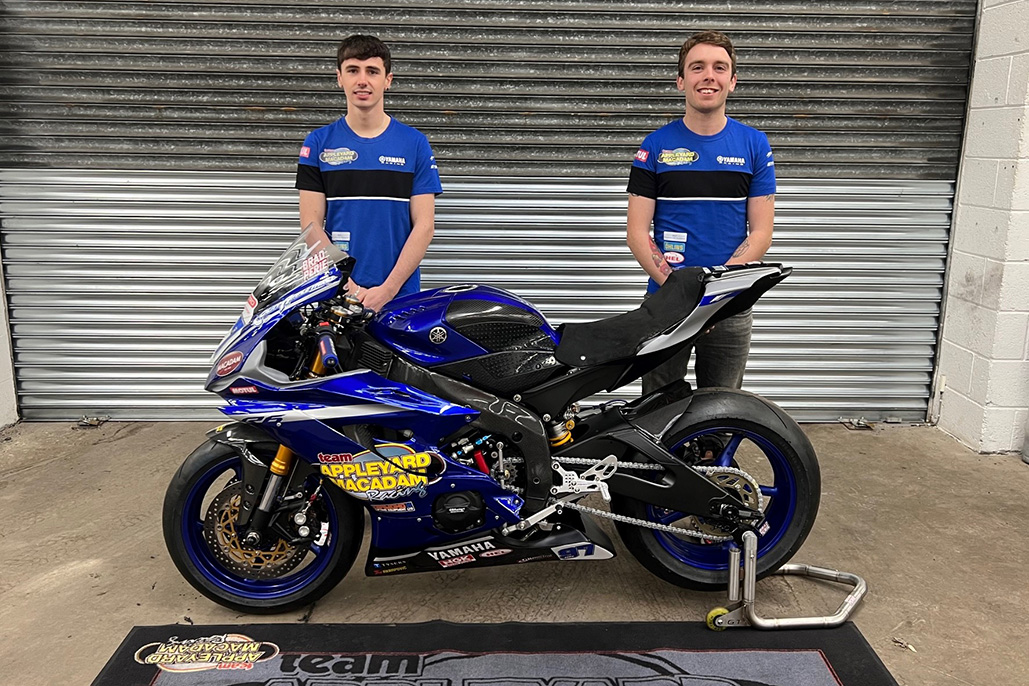 The team continue to look to develop young talent and after a very condensed 2021 season, are looking forward to a full testing programme with a four day test in Southern Spain in just a few weeks’ time.
Using their well-developed Yamaha YZF-R6 machinery, support from the manufacturer and a wealth of track data, the team are looking forward to a twin-pronged attack to fight for an unprecedented fifth ‘middleweight’ crown.
Bradley Perie (22) signed for the team last year and came out ‘swinging’ with podiums and wins immediately, to actually lead the series, before some setbacks dropped him down to fourth, despite taking six victories. Kendal native Brad comes into the new season with a different mindset, support crew and with a year of learning under his belt.
Harry Truelove joins the team having ridden another Yamaha YZF-R6 machine over the past five seasons, finishing fifth last year and logging up three hard fought wins along the way. Harry, 25, knows that this is his best chance to date as he joins the ‘Appy-Mac’ Yamaha squad, renowned for turning out some of the best Supersport machines on the planet, as shown by their front-running wildcard displays in WSB.
Bradley Perie explained his approach for 2022; “I know lots of people say this but I’ve never felt better prepared going into a race season, I learned so much, good and bad but couldn’t do much to change things as we were racing pretty much every weekend. Now I’ve got two new mechanics, a year of experience and for the first time ever I’m going testing, I can’t wait!
This season the objective is clear and I feel confident we can go for wins again and push for the title.”
Harry Truelove said, “It feels good to be joining the team, they have a great set-up and long pedigree. We’ve always run a team ourselves but want to step it up in terms of professionalism which is what Appleyard Macadam provide. The wins showed me that we can be up there and my goal is to fight for the championship, it just takes a lot of hard work and a little luck!”
Team Owner Robin Appleyard said, “We went into last season thinking we could try for podiums and see how the year would pan out but Brad came out swinging and led the series! Now we’re off to Spain and start afresh which is a great opportunity.
We know Brad has great outright speed and can help him put a championship campaign together. Harry is a strong rider and showed his form a couple of times last year, I think riding in our team with the bikes and experience we can supply, we can improve his consistency.
We’ve had a busy off-season, looked at where we can improve both personnel and machinery so strengthened our allegiance with Yamaha and so are looking forward to being competitive and importantly consistent …two areas both lads can improve.