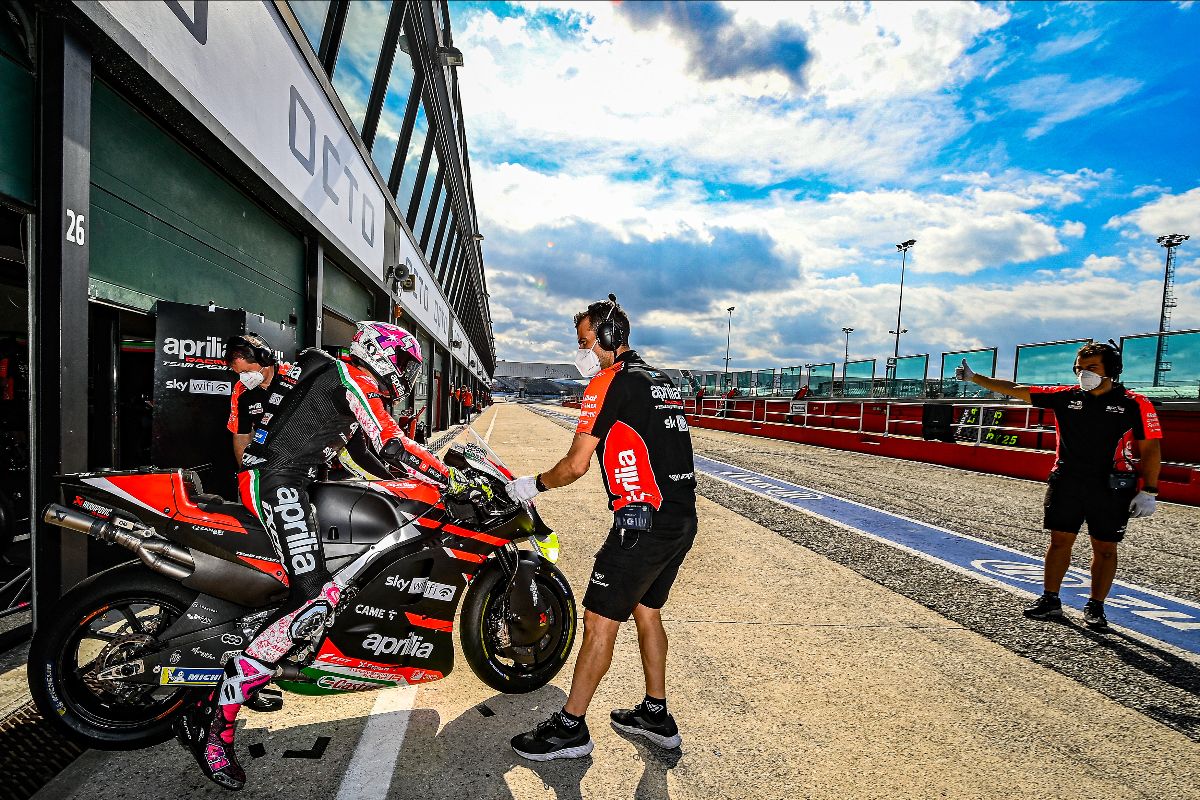 Aleix Espargaro just shadows Pecco’s Day 1 best on the timesheets, and there’s plenty more to talk about as Day 2 of testing concludes.

Much to everyone’s delight, the weather played ball on Day 2 of the Official Misano MotoGP™ Test as every factory was able to get some valuable track time under their belts, with more new parts introduced on Wednesday. Francesco Bagnaia (Ducati Lenovo Team) finishes top of the combined timesheets thanks to his 1:31.524 on Day 1, but it’s Aleix Espargaro and Aprilia Racing Team Gresini who reigned the timesheets on Day 2, 0.080 ahead of Bagnaia’s Wednesday best as the Italian remained consistently quick.

The two-day schedule mainly made headlines for the new parts and upgrades on show, however, and no one had more to test than Honda. Test rider Stefan Bradl rolled out of the garage on a damp Tuesday morning with a radically new RC213V, with Marc Marquez (Repsol Honda Team) heading out on it in the afternoon when conditions cleared. The most noticeable differences from the outside were the air intake shape, the tail unit and the exhaust positioning.

Then, on Wednesday morning, Pol Espargaro (Repsol Honda Team) ventured out on the bike Marc Marquez and Bradl had been seen using, while the number 93 also lapped on another new Honda – slightly different once again, with a different air intake. Marc Marquez was also out on the new bike with the current 2021 aero package that Honda have been using since the German GP, with Pol Espargaro testing it with the new aero. He did his best lap in the FP4 Wednesday session on a new bike too, a 1:32.105. He ended Day 2 sixth with a better lap from the morning, with teammate MM93 in 10th.

LCR Honda boss Lucio Cecchinello revealed that Alex Marquez (LCR Honda Castrol) has been working on his bike’s weight distribution, and they’ve found a setting that he feels more comfortable with. The two-time World Champion was also back-to-back testing the regular, carbon bonded chassis and the chassis that Marc Marquez and Espargaro have been using on and off since Assen. Takaaki Nakagami (LCR Honda Idemitsu) – again according to Cecchinello – was working with the aero package that was first seen at the Sachsenring, and both of his bikes were fitted with the carbon-bonded HRC chassis. The Japanese rider impressed to end Wednesday fourth on a 1:31.735.

On Day 1 at Ducati, the Bologna marque unveiled two new aero packages. The first very similar to the one they’re using in 2021, but the second  splits the second winglet into two different elements, meaning the aero package has four elements in total when including the downwash duct at the bottom of the fairing.

Bagnaia and Jack Miller (Ducati Lenovo Team) were back-to-back testing the different aero packages across the two days at Misano, with a Day 1 crash not affecting Pecco’s schedule. The Italian called it a day just before lunch on Wednesday, in second with a 0.080 deficit to Aleix Espargaro. Miller ended Day 2 in fifth.

It wasn’t the ideal test for San Marino podium finisher Enea Bastianini (Avintia Esponsorama). The Italian suffered a crash on both Day 1 and Day 2, the second seeing him sit out the rest of Wednesday, but rider ok. Bastianini’s teammate Luca Marini (Sky VR46 Avintia) had a very successful test, however, and the Italian was able to lap quicker than he went all weekend at the San Marino GP.

At Suzuki, reigning World Champion Joan Mir and Team Suzuki Ecstar teammate Alex Rins were both impressed by the new chassis Suzuki brought to the Misano Test on Day 2. So much so, it may be seen on their GSX-RRs in 2021. The new chassis has a carbon bond at the top, unlike the current one.

In addition, Suzuki were testing the 2022 engine that we first saw at the pre-season Qatar Tests. Test rider Sylvain Guintoli joined Mir and Rins on Wednesday fresh from his Bol D’Or win, as we witnessed Suzuki also unveil a new side fairing.

Mir was able to improve something on the braking side of things that he’s been missing all season on Day 2, and the number 36 was third on Wednesday. Rins confirmed that the 2022 engine seems a bit more powerful, but the aero package needs adjusting to match the extra power. Rins also said that he did a couple of long runs, one with the rear ride height device, and it looked like he was quicker with the device fitted – overall a solid test for Suzuki.

Meanwhile, current World Championship leaders Yamaha had a new chassis to try, but Monster Energy Yamaha MotoGP Team Manager Massimo Meregalli said that 2022 wasn’t their main focus across the two days. Fabio Quartararo was able to give the 2022 prototype a shakedown on Tuesday, before switching his attention to finding some improvements for the second Misano race coming up in October. He was seventh on Day 2.

Franco Morbidelli (Monster Energy Yamaha MotoGP) was unhurt in two crashes on Day 2 as the Italian continued his adaptation to the 2021 YZR-M1, as well as working his way back to full fitness. Morbidelli felt better than he did during the San Marino GP according to Meregalli, especially with the front end. 70 laps were completed by Morbidelli on Tuesday and Wednesday, now it’s time for some rest ahead of the Americas GP.

Valentino Rossi (Petronas Yamaha SRT) took part in his final test as a full-time rider on home turf, and on the agenda for the nine-time World Champion was electronic settings, to try and sort out the traction issues he’s been facing. New teammate Andrea Dovizioso’s main aim was to simply get used to his new bike. The Italian did end up testing a carbon swingarm on Day 2, as Dovizioso completed a mammoth 130 laps across the two days.

Meregalli also confirmed that Yamaha test rider Cal Crutchlow will be in Aragon for two days to test the 2022 bike, before heading to Jerez soon after for a three-day test. The British rider will be busy putting next year’s YZR-M1 through its paces over the next couple of months before the 2022 pre-season test in Jerez after the Valencia GP.

After a quiet opening day, Day 2 was a busy one for KTM. A new aero package and air intake were introduced: the intake is bigger and the aero package has an additional set of wings further down than the 2021 RC16. Additionally, Miguel Oliveira (Red Bull KTM Factory Racing) had another all-black bike but the aero, air intake and shape of the fairings is the same as the regular bike – which could mean the Austrian factory had something new internally. Oliveira was ninth on Day 2 and teammate Brad Binder 12th.

The other major news on Day 2 was the debut of Moto2™ title contenders Remy Gardner (Red Bull KTM Ajo) and teammate Raul Fernandez. Both will be stepping into the Tech3 KTM Factory Racing ranks at the end of the season, and unsurprisingly, the duo more than enjoyed their first outing on a MotoGP™ bike. Both were impressive in terms of pace despite Gardner having a crash, and Fernandez finished the day just over two seconds off the fastest time set by Aleix Espargaro.

For Aprilia, the timesheets told a good story, and the Noale factory first rolled out some new, smaller, thinner aero on test rider Lorenzo Savadori’s bike on the opening day of testing. Maverick Viñales (Aprilia Racing Team Gresini) was the first rider on track as the Spaniard continued to adapt to his new bike, trying different set-ups, and he was able to improve the overall pace. Finding 0.7s, the number 12 made good progress across the two days and finished Wednesday in P8. Viñales didn’t try anything for 2022 in the 149 laps he notched up during the test.

Aleix Espargaro, meanwhile, tried some new aerodynamic configurations and other new parts for the 2022 bike, including a couple of evolutions of the front fairing. The Spaniard confirmed he and Aprilia have made a step forward, with the fastest lap of the day bearing good witness.

A busy, exciting and very interesting Misano Test has drawn to a close! Next up for the MotoGP™ paddock is a trip to Austin and the Circuit of the Americas for Round 15 of the 2021 World Championship, so make sure to join us next weekend for the horsepower rodeo.
For more MotoGP info checkout our dedicated MotoGP News page