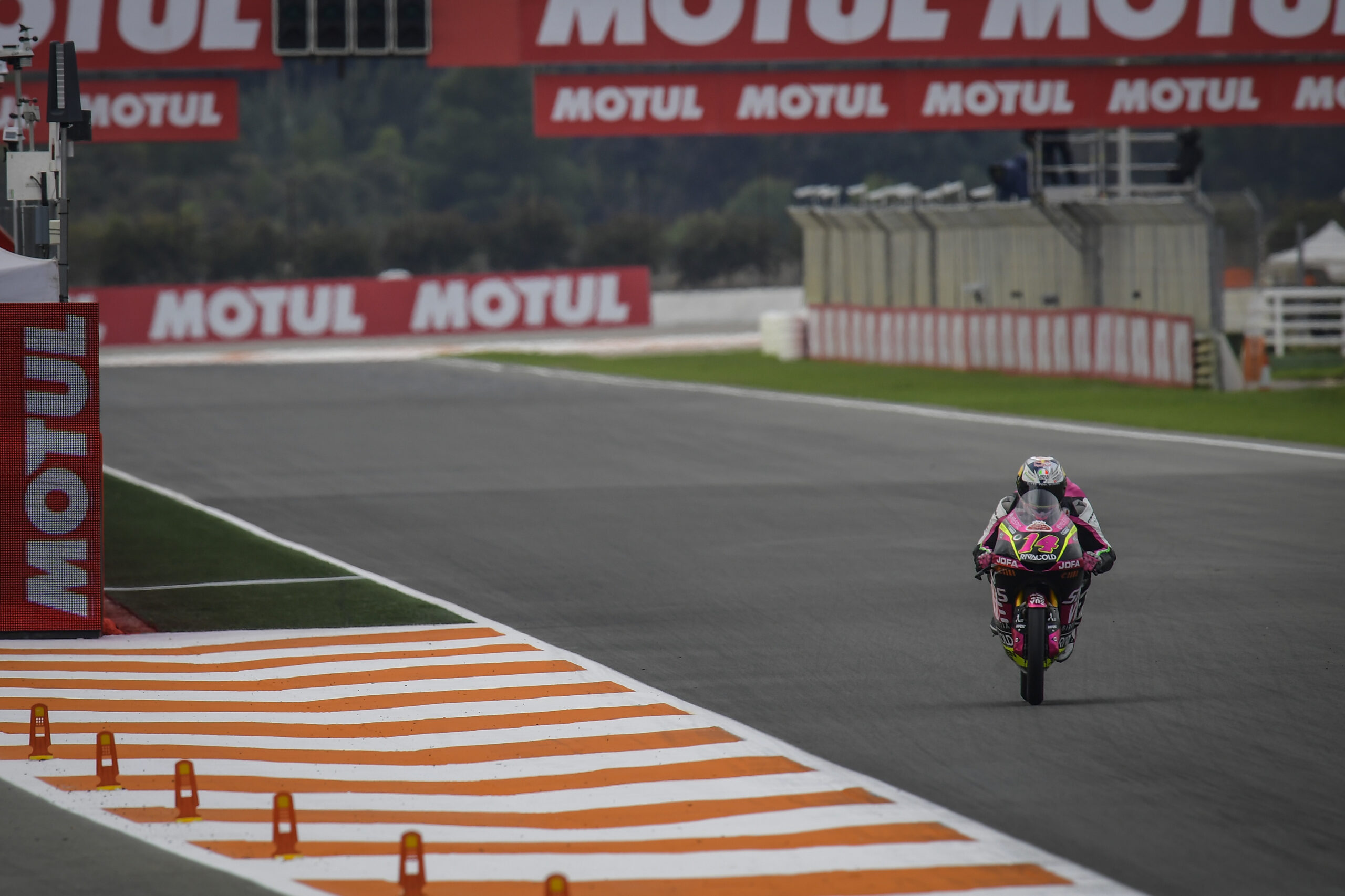 The Italian sets a new lap record to beat Masia to the top, with Ogura ninth, Vietti 11th and Arenas 15th on Day 1

Tony Arbolino (Rivacold Snipers Team) set a new lap record at the Gran Premio Motul de la Comunitt Valenciana to head the combined timesheets on Day 1, the Italian’s last stand starting on a high. Jaume Masia (Leopard Racing), another trailing some points if he’s to stay in title contention for the season finale, was second quickest, with Europe GP podium finisher Sergio Garcia (Estrella Galicia 0,0) completing an all-Honda top three on Friday. They were within 0.083, with Deniz Öncü (Red Bull KTM Tech 3) keeping the top four within less than a tenth as the Turk ended the day 0.098 off the top.

By the end of play, all the key players in the title fight had a provisional place booked in Q2 – except Championship leader Albert Arenas (Gaviota Aspar Team Moto3). He ended the day in 15th and will be hoping the heavens don’t open on Saturday morning.

FP1
In FP1 it was Tony Arbolino in control, as the Italian setting his new lap record early in the weekend. His 1:38.413 edged out Öncü by 0.098, the Turkish rider starting his weekend in second despite a heavy crash at Turn 6 earlier in the session. Romano Fenati (Sterilgarda Max Racing Team) completed the top three.

With weather vastly improved on seven days ago, the Moto3™ riders took full advantage and the session was a busy one. Rounding out the top five were Jeremy Alcoba (Kömmerling Gresini Moto3) and European GP winner Raul Fernandez (Red Bull KTM Ajo), with the top two in the title fight a little further back: Championship leader Albert Arenas was 12th in FP1, just ahead of main rival Ai Ogura (Honda Team Asia), who trails him by just three points.

The bigger drama in the session was two-fold: one was an incident for Sky Racing Team VR46 teammates Celestino Vietti and Andrea Migno, who crashed together at Turn 10 after Vietti highsided and Migno was left with nowhere to go – riders ok. Filip Salač (Rivacold Snipers Team) was taken to the medical centre and later to hospital as well for some check-ups after a heavy crash. He was declared unfit for a chest injury.

FP2
Masia topped FP2 from Garcia, with SIC58 Squadra Corse teammates Niccolo Antonelli and Tatsuki Suzuki also within less than a tenth of the top. Within another tenth were Fernandez and Ogura, with the timesheets considerably tighter on take two at Valencia.

There were no crashes in the afternoon, and the combined timesheets are a mi of the morning and afternoon times.

Arbolino stays first by virtue of his FP1 lap record, closely followed by Masia and Garcia as the top two in FP2 complete the top three overall. Öncu and Fenati complete the top five from their times in FP1. Antonelli and Suzuki are sixth and seventh respectively from their afternoon bests, and they’re split by a single thousandth. Europe GP winner Fernandez takes eighth, ahead of Championship challenger Ai Ogura in P9. Alcoba completes the top ten from his fastest lap in FP1.

Title hopeful Vietti was 11th quickest from his FP2 time, the Italian bouncing back from his crash in the morning, with rookie Yuki Kunii impressing to put his Honda Team Asia machine into P12 overall on Friday. Compatriot Kaito Toba (Red Bull KTM Ajo) was P13 by just 0.008, with Migno only another 0.002 behind him as currently the last man set to move through to Q2.

That leaves Arenas down in 15th on Friday and looking for more, although the Championship leader was only 0.011 off an automatic place in the second qualifying session. Will the rain come down on Saturday morning and send him through Q1? Tune in at 10:00 (GMT +1) to find out in FP3, before qualifying from 13:15.