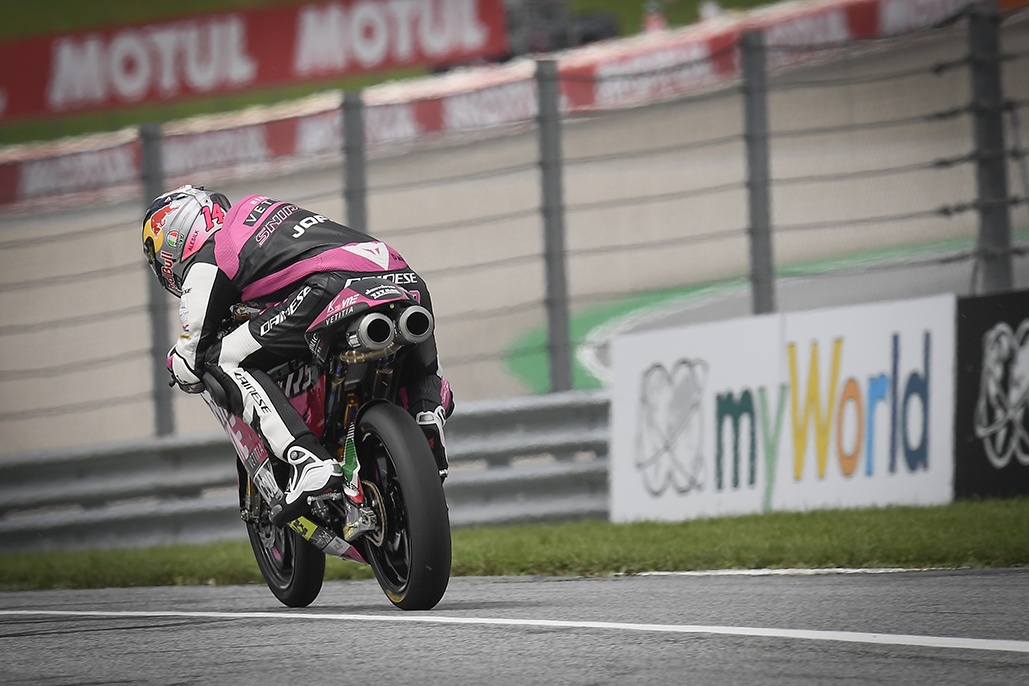 The Italian ends the day three tenths clear of the field as rain interrupts play in FP2.

FP1
Arbolino took the baton in FP1, the Italian ending the session three tenths clear and looking dominant, although his best lap was also set behind Gabriel Rodrigo (Kömmerling Gresini Moto3) as he tucked into the Argentinean’s slipstream. McPhee was second, pipping Masia as it tightened up.

A few of the key contenders had laps interrupted after Red Bull KTM Ajo’s Raul Fernandez tucked the front at Turn 3 in the closing stages, causing some to have their final laps of the session cancelled as is now automatic under a Yellow Flag. In the end, Celestino Vietti (Sky Racing Team VR46) and Niccolo Antonelli (SIC58 Squadra Corse) completed a top five split by half a second, although Fernandez, his teammate Kaito Toba, Ai Ogura (Honda Team Asia), Andrea Migno (Sky Racing Team VR46) and Championship leader Alberto Arenas (Valresa Aspar Team) made sure fourth to tenth was split by less than a tenth.

Rodrigo joined Fernandez as a crasher in the session, with BOE Skull Rider Facile Energy’s Riccardo Rossi also taking a tumble. There was also an incident for Jason Dupasquier (CarXpert PruestelGP) as he was passed by Carlos Tatay (Reale Avintia Moto3) before the latter had a moment, leaving the Swiss rider nowhere to go as he tagged the back of him and went down in a stroke of early bad luck in Austria.


FP2
As the skies and forecasts had been threatening, the afternoon saw the rain come down. Although it was lightly enough at first for the lightweight class, the flag flew to warn the riders just after half way through the session. McPhee was fastest at the time and remained so, but half a second down on Arbolino’s quickest lap from FP1.

Behind McPhee came Rodrigo, and he was one of the few to improve as he knocked half a second off his FP1 best early in the session. Masia was up there once again, with Czech GP winner Dennis Foggia (Leopard Racing) in fourth; another to improve in FP2. The fastest man in the morning, Arbolino, locked out the top five.

Despite the sketchy conditions, no one came off in FP2, with the lighter rain and then localised downpour on part of the track putting paid to any risk-taking.

Heading into Saturday morning with a provisional place in Q2 are therefore Arbolino, McPhee, Masia, Vietti, Antonelli, Fernandez, Toba and Ogura from their FP1 times, with Rodrigo next up in P9 overall courtesy of his afternoon best. Migno, Arenas and Tatsuki Suzuki (SIC58 Squadra Corse) are tenth, 11th and 12th respectively, with Foggia slotting into 13th with his FP2 lap. Filip Salač (Rivacold Snipers Team) completes the provisional Q2 graduates.

What will Saturday bring? Will FP3 shakes things up again or see the field face more rain? Moto3™ head back out at 9:00 (GMT +2), before qualifying decides the grid from 12:35.